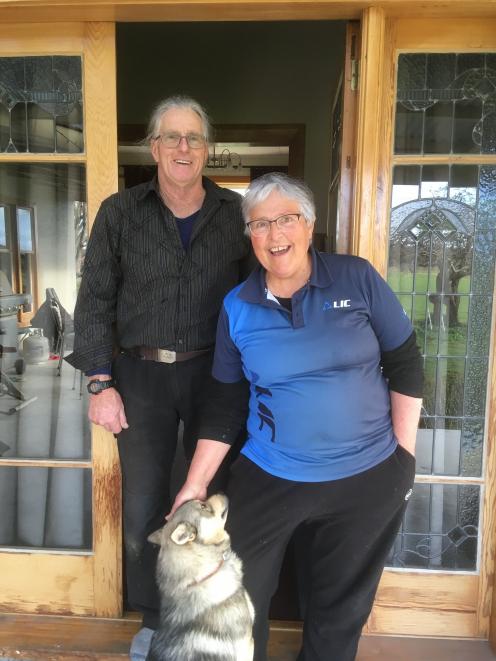 Pat and Jan Corbett have urged those who may be struggling with mental health issues during Covid-19 to talk about it. PHOTO: GEORGE CLARK
Temuka saleyards worker and former farmer Pat Corbett would still be milking cows if not for his "bite from the black dog".

Soon after returning from an Australian motorbike trip in 2012, he went to start work on a Waimate dairy farm and burst into tears.

"Confused and looking up to the stars, I asked myself what the problem was."

Mr Corbett realised he had depression and must have been living with it for some time, but never thought it would bite him.

DairyNZ released its "The View from the Cow Shed" report last month, which compiled feedback from dairy farmers across New Zealand.

DairyNZ chief executive Dr Tim Mackle said it was encouraging to see 94% of farmers reported they were proud to be working in the dairy industry.

At the same time, 62% said they or someone on their farm had experienced mental health issues over the last year.

Mr Corbett believed it was much more common than people thought.

His personal and professional relationships were strained, and he often stormed off in frustration on the farm and at home.

The cow shed had become claustrophobic and he had to get out. His wife was at her wits end and something had to be done.

Once he had spoken to a GP and was encouraged to tell people about it, he came clean with everyone he had spent time around.

"They said they knew," he said.

"The more we talked about it, the more accepting and understanding they became."

His advice to anyone hitting a rough patch was to have a conversation about it, especially during Covid-19.

"It can be bloody rough out there. I often cannot hack a full day at the saleyards and if you share what is going on, people are understanding. Do not let this illness hold you back."

Mr Corbett loved milking cows and would have kept working on the farm full-time if he could.

"It is hard to see why some people get sick of it because you have such a captive audience. But my brain can no longer manage it."

Taking medication had changed his day and he implored others to share what they might be going through.

"Talk about it — you should not hide it. This nasty thing creeps up and smacks you in the back of the head. The load is easier when shared."