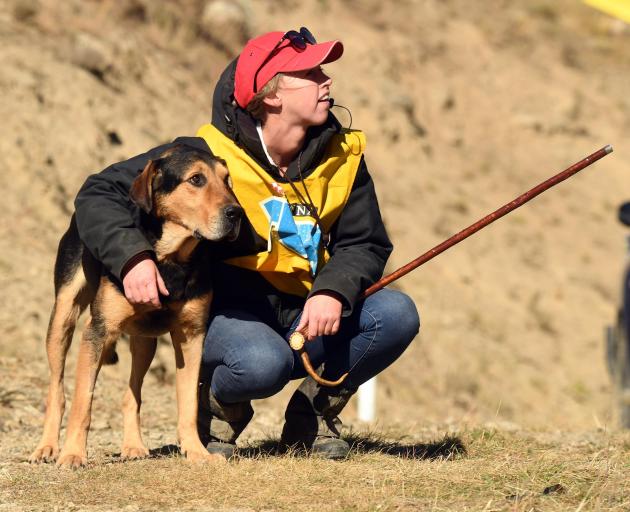 Kelly Tweed and Quake await their run in the straight hunt on the first day of the South Island sheep dog trial championships at Earnscleugh Station near Alexandra yesterday. PHOTO: STEPHEN JAQUIERY
When it comes to a pedigree in dog trials, Kelly Tweed has it covered.

In 2019, her sister, Steph Tweed, made history as the first woman to win a New Zealand dog trial championship with Grit in the straight hunt, while their father, Roger, a Waitahuna farmer, is a successful triallist too.

Kelly (26) might have have been a slight latecomer to the sport but is showing she has inherited the family genes, qualifying for this week’s South Island championships.

While Steph had to dash off to run one of her four dogs on another course, Roger was there to watch Kelly have her first run in the straight hunt on the first day of competition at Earnscleugh Station. Mr Tweed has five dogs qualified for the competition.

Last year was Kelly’s first season trialling; she admitted she never had any intention of pursuing a career in farming. She spent a year at polytechnic and worked in a law firm.

But it was spending a summer helping out her sister, who was then working in the North Island, that whetted her interest in farming.

She now worked on a farm at Cheviot while Steph was working on a property in the Rakaia Gorge. Kelly acknowledged her father and sister had been a "massive influence" on her foray into trialling.

"They are a pretty good support crew. I’ve learned a few tricks off them," she said.

It was her second championship and she admitted she was "pretty nervous" when she stepped on to the mark for her first run with Quake. "But it’s pretty cool once you get out there," she said.

Her father bred Quake and broke him in and Kelly had the dog for the past three or four years.

"He’s a pretty relaxed sort of a dog which is good for me, he’s pretty easy going ... when you’re a nervous sort of person," she said.

Kelly said she now loved dog trialling — "it’s just cool, supporting all your mates. You want everyone to do well" — and she loved being outside with team of 10 dogs (including pet dogs) working on the farm.

She admitted she definitely felt pressure coming from such a successful family, but that pressure did not come from them, rather it was probably something she put on herself, she said.

As to whether there was any family rivalry?