By Sally Rae
0 Comments
Sid Strachan was having a busy day yesterday.

It was shearing time on the Strachan family’s sheep and beef farm at Awamoko, in North Otago, and Sid was helping pen up when he was not busy shearing at his own stand.

He had been there since 7am and, by late morning, he reckoned his tally was about 8200 — which might have been a slight exaggeration, but there was no doubting his infectious enthusiasm and work ethic.

Sid might only be 6 years old but he has been interested in shearing from an even younger age and spends a full day in the woolshed whenever he can.

He had two very clear ambitions: to buy North Otago shearing contractor Phil Cleland’s business — "he said I can do it when I’m 13" — and to win the Golden Shears.

On his own stand, he had a shearing machine and all the required equipment and clothing.

All he wanted for Christmas last year was a comb pouch which Santa Claus duly delivered.

Local shearer Wayne Cox made him a sling, while Mr Cleland provided a clicker to keep track of his tally, and a singlet which was then cut down to size.

Sid used to pretend to shear his toys but they did not feel real and he now used wool to imitate sheep. 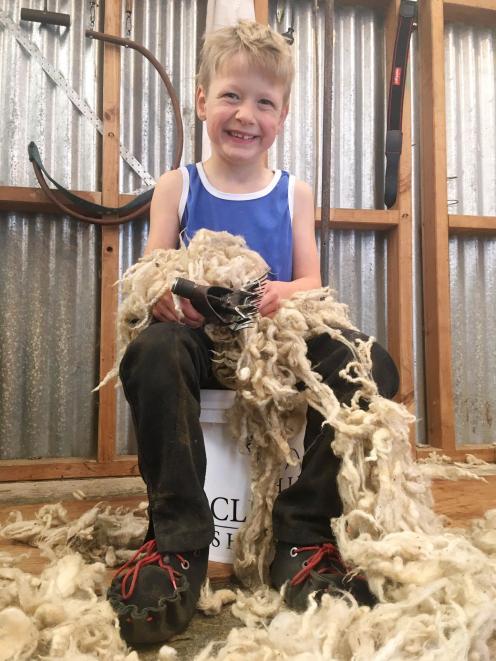 He honed his excellent technique by closely watching the other shearers.

He did not mind the early starts "because the sheep keep you warm", he said, and he was popular among the shearing crew.

"They love him. We realised how supportive they were when they missed him," Sid’s father Nev said.

A video on Facebook of Sid shearing had had more than 10,000 views and messages had been received from as far afield as Scotland.

While Sid was yet to tackle shearing a live sheep, his mother Mel said he would have a go when he was big enough to handle it.

Mrs Strachan believed it was likely the youngest of the couple’s four sons — Sid also has a younger sister — would eventually become a shearer.

"It is his absolute passion and you’ve got to go with their passions and support them. I seriously think that’s what he will be."