Enjoying life on and off rugby paddock 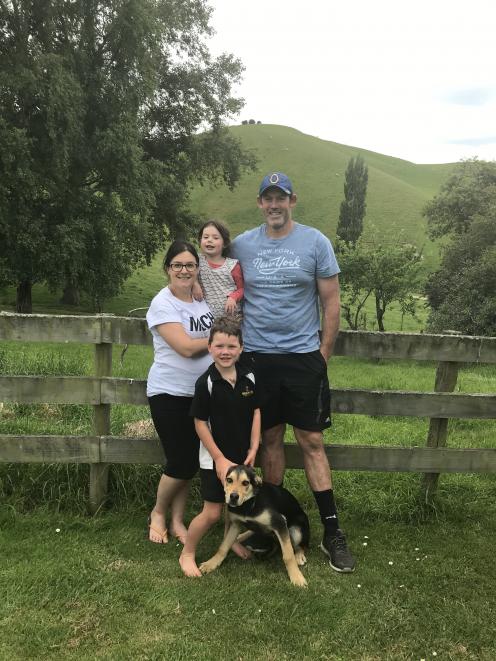 Tom and Jacque Donnelly and their children Charlie (3) and Harvey (6) are enjoying a taste of farming life on their lifestyle property 20 minutes north of Dunedin. Photo: Alice Scott
Hard yakka on the rugby paddock translates well to the hard yakka on the farm paddock. Alice Scott caught up with incoming Mitre 10 Cup Otago rugby coach Tom Donnelly and his wife Jacque.

Jacque Donnelly reckons she and husband Tom hit the jackpot when they bought a 17ha lifestyle property 20 minutes north of Dunedin, near the small seaside town of Waikouaiti a year ago.

The lush rolling hills of their East Otago farmlet offer ample room for the couple’s young family and is giving Tom a small taste of farming in his own right.

Jacque said her husband was ‘‘an active relaxer’’ and the years they spent overseas while Tom played rugby in France and Japan made them realise the life they wanted for themselves when they returned home.

They love that 6-year-old son Harvey has space to ride his motorbike and 3-year-old daughter Charlie loves her animals. Baby number three is due in late February.

Tom has secured a three-year contract coaching the Otago rugby team in the Mitre 10 Cup. He played 15 games for the All Blacks in 2009 and 2010, but missed the cut for the 2011 World Cup, a detail he laughs he is still ‘‘a bit tender about’’.

Both Tom and Jacque are originally from the North Island and neither from farming backgrounds. Tom said he moved to Dunedin in the late 1990s to study surveying at the University of Otago, and he got to know a few guys who were from farms when he played rugby.

‘‘There’s just something about it that really appeals. I guess a bit like playing a tough game of footy — the nicely buggered feeling you get at the end of the day is quite satisfying. It’s the sense of being productive.

‘‘I enjoy crutching, I enjoy drenching sheep up the race. It keeps you fit and it is also a career,’’ he said.

Jacque said they knew they needed a project when they moved back to New Zealand.

‘‘Out here there’s always something to do.’’

She works full-time as a lifestyle and rural property sales consultant for Edinburgh Realty and loved the flexibility the job offered around family life and Tom’s work commitments.

Tom avoids using numbers and specifics when answering questions about their block. They ran ‘‘heaps’’ of trading cattle, a ‘‘handful’’ of sheep. And he scoffed at (but quietly loved) Norma the pet lamb. He had his wayleggo call down-pat when he called his contingency of farm dogs on to the back of his ute.

‘‘We run a one dog per stock unit ratio here,’’ he laughed.

Working farm dogs was definitely a skill he would like to get better at, but Jacque said

he had been quite lucky to receive some good dogs through friends.

Doing casual work for other farmers in the area had kept him busy.

‘‘He seems to be busier now than when he’s coaching,’’ she said, laughing.

Ambitions to expand into a bigger farm were on the cards for the Donnellys. Being a fully fledged farmer was the ultimate goal and Tom said a coaching job would easily fit around it.

‘‘The busy time of coaching is July to October. Doing both is definitely achievable.’’