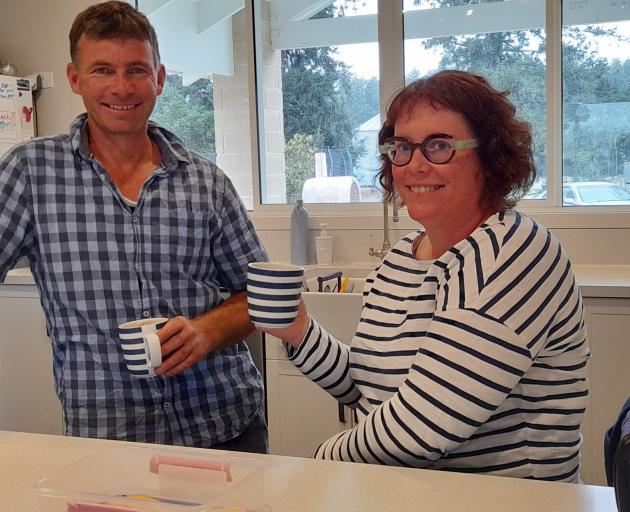 Mike and Penny Carr catch a cuppa at home before tackling their next duties of farming and family life. PHOTO: TONI WILLIAMS
Mike Carr has had a calling to be a farmer since he was 8 years old; old enough to drive a tractor and help out on farm.

By the age of 25 he’d travelled overseas and had a mechanic’s qualification under his belt before returning to the family farm to work alongside his parents, Ian and Sue.

Then he took over.

He loves farming — and being outdoors.

"You’re your own boss. It’s great — you don’t answer to anyone else," he said.

"There are not many downsides, to be honest."

The farm is near Mayfield village, in Mid Canterbury. It spans 330ha of flat land and is fully irrigated.

There are 1000 breeding ewes, as well as crops of cereal and small seeds and winter grazing.

On a fine day there are extraordinary views of the not-too-distant Southern Alps.

Mr Carr was in his mid-20s when he chose to come home to farm. He’d done a mechanical apprenticeship at McMurdo Motors in Ashburton and spent years working on farms in Canada, Europe and the UK.

He also travelled through Africa and South America before returning home.

"I had opportunities — it was my choice to come home.’’

And he hasn’t looked back.

He and wife Penny own the farm and have the ongoing support and help of his parents.

His dad was a great sounding board — and back-up — for farm operation planning, he said.

They bounced ideas off each other, which had proved successful.

Mr Carr is a third-generation sheep farmer; his grandparents were Bob and Mary Carr.

Like his forebears, Mr Carr has adapted his farm operation to stay current.

Of late he has introduced Ile de France rams to his ewes in an attempt to lower the wool micron in his flock.

Two Ile de France rams were sourced from North Canterbury breeder Jean Forrester two years ago, and then another three this year.

The Carrs back their wool product and want more natural, sustainable products to be the first choice by consumers. They have wool carpet throughout their home.

Mr Carr has encouraged Mrs Forrester to showcase her breed at the Mayfield A&P Show next weekend. It is his first year as the show’s sheep convener and it is a new sheep breed at the show.

Although lamb prices are reasonable Mr Carr would like to see wool prices lift to those of around two or three years ago, when it was about $6 a kg; it’s now down to $2 a kg.

He and his wife met 15 years ago when she was nursing in Christchurch.

She had also grown up on a sheep farm, in Cust.

The couple have two sons, aged 8 and 10, who keep them busy outside farm duties.

Despite their rural upbringing, they don’t expect the boys to automatically want to farm.

They agreed having opportunities off-farm were important, but the boys would decide their own career paths.