Genetic expert loves being back on farm 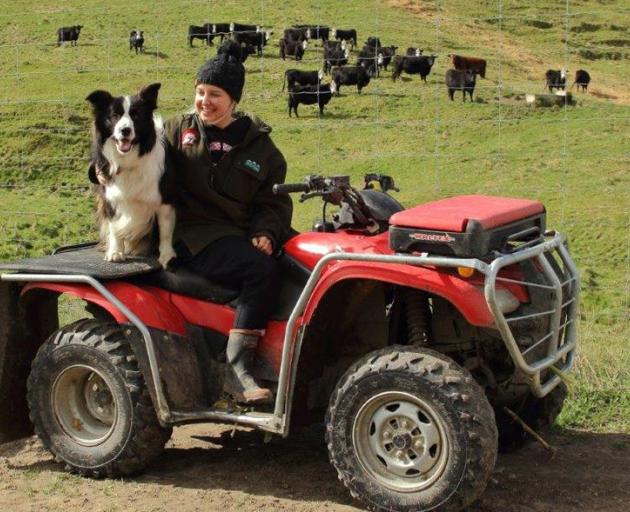 Jo Scott enjoys spending time on the family farm on the outskirts of Oamaru. Photo: Supplied
Farming is in Jo Scott’s genes. She is the fifth-generation member of the Scott family to be involved in farming and is combining that with her day job,  specialising in animal genetics.

Although she works out of  the Dunedin office, she lives in North Otago, where both sides of her family have farmed for many years.

After leaving Waitaki Girls’ High School, Ms Scott headed to Massey University to earn  a science degree, with a double major in agriculture and animal science.

Nearly six years ago, she joined Zoetis, working initially in Dunedin then the North Island and finally back to Otago two years ago.

It was all about driving production,  but also ultimately about the consumer and what they wanted to eat, and that all started with the breeding, she said. The job was "extremely fun" and it was the people who made it. She was pleased she could  help them in their businesses.

"Farmers — I absolutely love them," she said.

She described them as the most impressive people she knew. Sometimes, they were running million-dollar businesses with no internet.

Stud breeders she worked with were not just farmers, they were agronomists, geneticists, businesspeople, sales and marketing managers, and also dealt with human resources.

"They have such big roles; I love being part of that business."

Ms Scott’s particular passion was for the "next generation coming through", saying they would have to be more strategic and specific about how they ran their businesses, but they were sparking on to the technology  available.

Three years ago, Ms Scott did the Kellogg rural leadership course. Initially, she wanted something different from genetics, which was what she did every day.

She toyed with the idea of doing something on millennials and intergenerational farming, and women in agriculture.

But she ended up concentrating  on genetics, or more specifically how commercial farmers valued genetics, and it gave her a greater understanding of the psychology of farming.

More of a global outlook was needed and farmers also needed to be thinking about who consumed their products.

"We’ve got to get out of that commodity production," she said.

Growing up, Ms Scott said she toyed with a few different ideas but she always came back to her roots — the land.

She was passionate about the agricultural sector and also about women in agriculture, and  encouraging young people into the sector.

And it was not just about being a farmer — friends she made at university while studying were in very diverse jobs in the sector, whether working for Fonterra, as rural bankers or fertiliser reps.

She was keen to take a group of young people to the US,  hopefully next year. She went there when she first joined Zoetis and now she wanted to expose others to what was going on in the world. The Scott family was a recipient of a Century Farm award in 2012, having been on the land at Ardgowan, on the outskirts of Oamaru, since the 19th century.

Being fifth-generation was an example of resilience. Throughout those five generations, there had been a lot of resilience, she said.

A new artificial insemination  programme had just been started at Seaview and Ms Scott enjoyed "throwing in some ideas".

She felt very lucky to have such an amazing support network both within her family and within her industry.

One thing she loved about her job was working with industry professionals who all had similar goals.