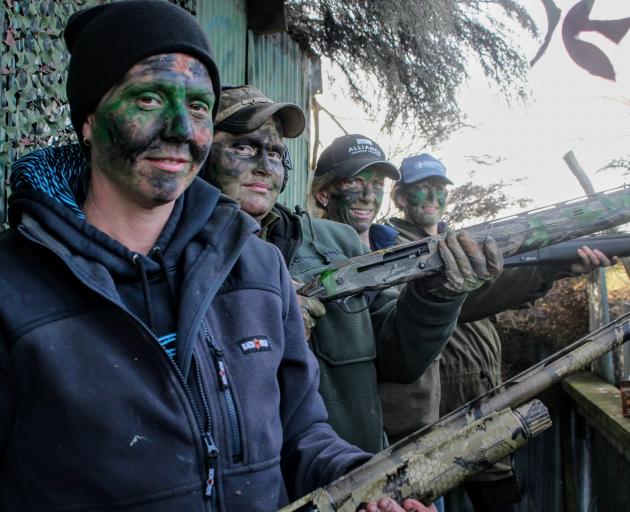 In the Hen House ... Getting ready to shoot some ducks are (from left) Janice Gerken, Jamiee Edwards, Jess Turnbull and Jayne Law.PHOTO: LUISA GIRAO
Duck-shooting is no longer just a boys’ club.

Although men still account for the majority of duck-shooters in Southland, the number of women involved has increased in recent years.

Less than 10% of the duck-shooting licences were issued to women.

‘‘We [Fish & Game Council] would love to see more women joining the sport and breaking this stereotype.’’

The season began on Saturday after a delay because of Covid-19 restrictions.

A group of female Southland duck-shooters believed it was a fun activity for everyone.

Kate Boylan, Nadine Duff, Jamiee Edwards, Janice Gerken, Jayne Law and Jess Turnbull have been duck-shooting together for the past seven years at their mai mai in Balfour.

Some of the group grew up on farms and their parents taught them to shoot.

‘‘We all knew each other before and grew up with duck-shooting around us. We decided we wanted to get together as a group of girls to have some fun while we went duck-shooting,’’ Mrs Gerken said.

‘‘Doesn’t matter who you are or what sex you are. It [duck-shooting] is about having a good time,’’ she said.

‘‘There are a lot of only-girls mai mai out there and they have way more fun than the boys.’’

But the gathering is not only about girl time.

Every year, the group also pays homage to Mrs Edwards’ late husband, Liam Edwards, who died four years ago in a helicopter crash near Athol.

She said he encouraged her to get into duck-shooting and when her friends decided to create a girls-only mai mai, Mr Edwards helped them build it.

As Mr Edwards died one week before the beginning of the duck season, the group supported Mrs Edwards through the rough time and they decided to create a new tradition.

‘‘We do a salute to him every duck-shooting season. We toast to the great man he was.’’

I can think of a lot more “ fun “ things to do with mates in the outdoors than killing innocent ducks , some which do get wounded and suffer .
The justifications used to defend this “ sport “ are woeful and don’t stack up , many of their wetlands are also being drained to make way for yet more intensive farming . I and others see it for what it is , senseless killing of another species , it’s totally lacking in any compassion or intelligence .