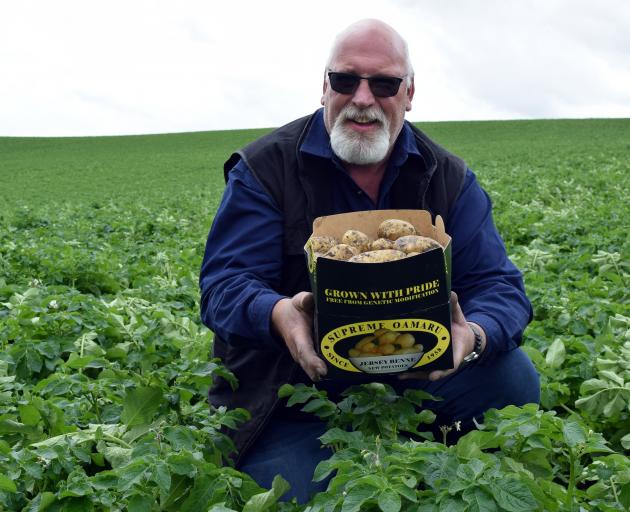 Armstrong and Co owner Peter Armstrong has been battling wet conditions during the harvest his Jersey benne potatoes in North Otago. PHOTO: SHAWN MCAVINUE
A North Otago market gardener has a thick skin from growing soft skin potatoes for more than 40 years.

Armstrong and Co owner Peter Armstrong said jersey benne potatoes accounted for nearly a third of the crops on about 140ha land he owns and leases between Totara and Maheno.

The harvest began early last month and it had poured with rain at least one day each week since.

Rainfall had been consistent, making the crop too wet to pick.

"We are waiting for the weather Gods to give us the green light."

"You’ve got to have white potatoes to sell."

Conditions were dry when the crop was growing and had been wet since the harvest began last month.

"It would have been nice to have rain when they were growing and dry weather for picking but it’s Mother Nature — you can’t argue with it."

He doubted all the potatoes would be harvested this season due to the wet start.

"We will probably have to put the hoe through half of them this year."

He remained positive because he had planted potatoes each month from May to November to "spread the risk".

Staggered planting ensured he would not lose all of his crop, if hit by a spell of wet weather and "nice young Jersey bennes" would be available when it dried out.

Most potato growers faced greater risk because they planted over a shorter period, he said.

Farmers have to "take the good with the bad" but he would be frustrated if it rains next week, in the lead up to Christmas.

"That’s a big week — you sell a lot of potatoes in Christmas week."

As soon as the weather was fine, the pickers would be flat out.

"It’s just a matter of being patient but I’ve been through enough potato seasons now that nothing really surprises me."

Everybody wants Jersey bennes for Christmas, he said.

The flavour of potato was distinctive to the region and could not be replicated anywhere else in New Zealand.

Another challenge this season was a staff shortage for the first month of the harvest, he said.

Usually he had a waiting list of pickers — a mix of pupils and backpackers.

"They just weren’t around — partly because exams were put back for school kids — and because of a genuine labour shortage."

More staff became available last week, and he was no longer short of staff.

When it rains, his staff harvest his other crops, mostly cabbage, cauliflower and broccoli.

Growing was "addictive" because of the possibility a bad season could be followed by a "cracker".

"I’m always optimistic the next crop is going to be the good one. That’s what I like about this game, you just don’t know what is around the corner."