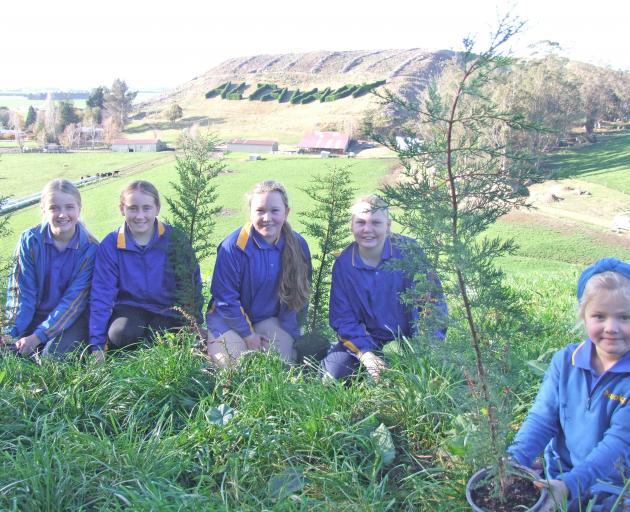 Preparing for the replanting of the Altavady hedge in North Otago are (left to right) to Maddie Bishop (12), Charlotte Elliott (13), Riya Isbister (12) Paige Strachan (12) and Hazel Faulks (5). PHOTO: SALLY RAE
For nearly 90 years, the pine hedges spelling the farm name Altavady have been a North Otago landmark.

On the hill of an Awamoko farm, they were first planted by Ted Aubrey, who obtained the property by ballot after World War1. He thought of the idea while waiting for a worker to bring up more trees to complete planting a plantation.

Mr Aubrey, who lost a leg in the war, was so inspired by the view that he sent the worker back to get pegs to mark out Altavady in large letters across the hill.

The hedges have remained since then but, while they still looked healthy from a distance, they were largely all dead on the inside and would eventually decay and lose appeal, Kate Faulks, who now manages Altavady with her husband Adam, said.

Determined not to lose such a landmark, they liaised with Trevor Lee, from Statement Trees at Totara, who had done a"fantastic job" growing more than 400 cupressus trees for two years.

They were now ready to plant in place of the existing pine hedges. The letters spanned about 400m and the trees would be planted less than a metre apart.

"Adam and I, like so many others, grew up with the familiar landmark and we want to ensure that future generations continue to see the hedges on the hill," she said.

Parts of the existing hedges were more than 3m high and challenging to maintain safely. The new hedges could be safely maintained at a practical height while still being visible.

"The hedge will look like its had a pretty bad haircut for a while but, before you know it, the trees will fill out and the hedge will return to its former glory," she said.

The replanting process would begin this week and the project would be completed over a few days. Recent rainfall had provided good moisture for the trees to get off to a good start and an irrigation system would be installed to ensure they made it through any dry spells while establishing.

Mr and Mrs Faulks, whose daughter Hazel (5) recently started at Papakaio School, thought it would be a great opportunity to let others be part of the historic event.

Pupils from the school would help on one of the replanting days. It would also be an opportunity for them to learn about the meaning of Altavady and why the hedges were planted.

"It’s quite special that, as these kids grow up, they will see the hedge grow again, too, and they can say they were part of the Altavady hedge history when it was replanted in 2021, nearly 90 years on from when Ted first planted the hill."

Mr and Mrs Faulks moved to Altavady in spring 2018.

"We want that [the hedge] to be there forever. Everything we do is about future generations," Mrs Faulks said.