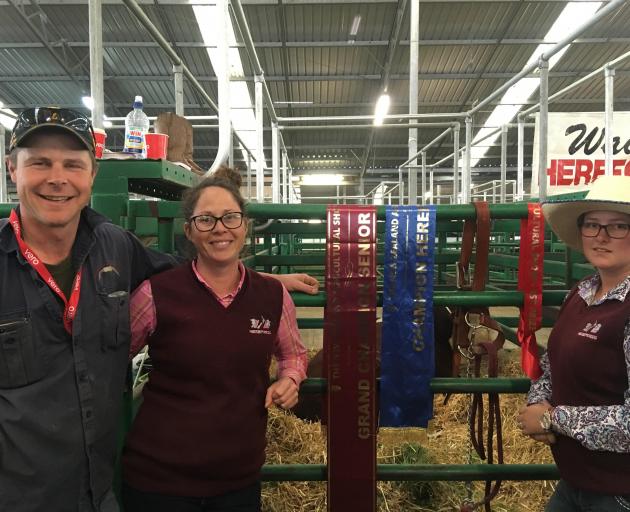 Hereford breeders Jamie King and Nicole Wallace, with Taylah Sykes, at the New Zealand Agricultural Show.PHOTOS: SALLY RAE
For the team at Waiau Herefords, the breed is king.

The King family, from the Lilburn Valley, Tuatapere, made the long trip north to the New Zealand Agricultural Show in Christchurch last week.

It was a trip of just under 700km, with their own four entries plus another 15 belonging to other breeders - but it was a journey they made willingly.

"It's a hard thing to quantify. You don't make a lot of money out of passion but by God there's some great people in it," Darryl King said.

Four generations are based at Waiau Herefords, including Mr King and his wife Nicky, his mother Fay - his father Colin died in August - son Jamie and his partner Nicole Wallace and their four children. Jamie and Nicole met in Canada while both were working on a ranch.

It was good to see the passion for the breed in the younger generation, and it was Jamie and Nicole who were taking over the mantle of showing, after a break of about 30-odd years, while Darryl quipped he was just doing the truck driving.

The King family were being helped out at the show by Taylah Sykes, of Mawarra Genetics, in Victoria, Australia, which had both Hereford and Angus cattle.

The Waiau stud was formed in 1954 by Ted Edmonds, a great friend of Colin King. In 1976, the King family took it over. This year, the 52nd on-farm bull sale was held, combined with several other breeders. 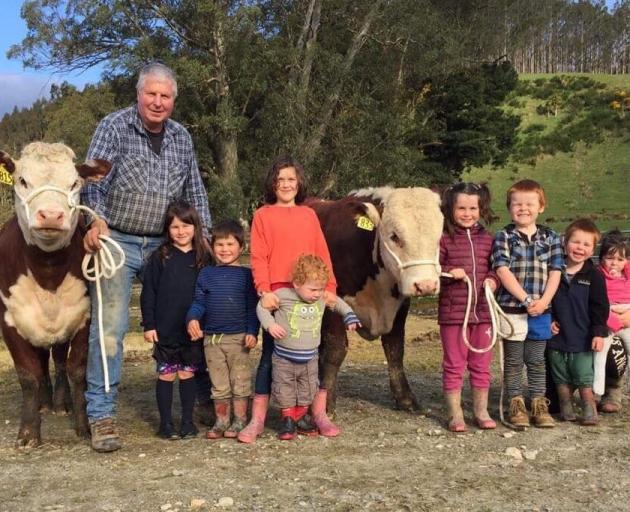 While it was hard to explain - "we just enjoy the Herefords", he said.

"We've always had them, we were brought up with them."

He said you could not beat looking at a mob of white-faced, red-skinned cattle. They were also designed to thrive in the back country.

"This guy's like a big pussy cat," he said, indicating one of the Waiau bulls.

"You could sit on him. We've had kids in there patting him. The thing is to try and get the public involved with farming just so they realise we're all good people."

It was a successful show for the Waiau team, with a bull placed third in the Senior Meat and Wool Cup - the pinnacle of the beef cattle judging - which was won by the Richard and Denise van Asch, of the Burtergill stud in Marlborough, with a South Devon bull.