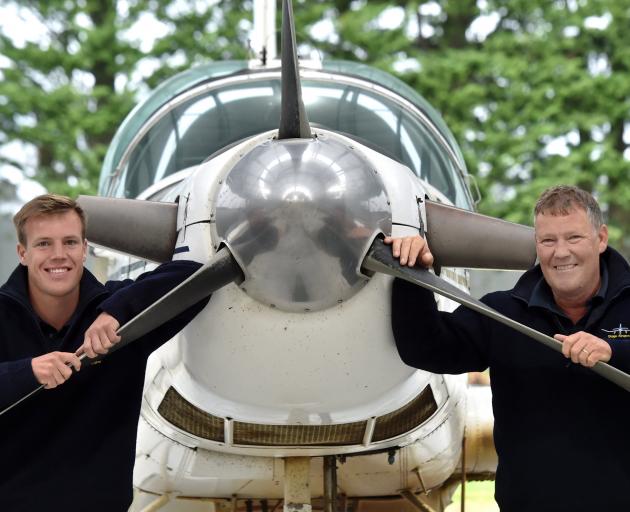 Des Neill never had any expectations his son Ryan would follow in his footsteps in the agricultural aviation industry and inherit his interest in farming.

All he cared about was that he was happy.

But having watched his father grow Otago Airspread — the business Des established with wife Elaine in 2000 — Ryan had his heart set on having a career in the air while also spending time on the land.

‘‘I’ve watched Dad as I’ve grown up ... he started the business when I was six months old, so I just grew up watching and wishing I could do that,’’ the 22-year-old said.

While he was keen to get into flying straight after leaving secondary school, his father suggested that was not the best idea and he completed an agriculture degree at Lincoln University.

He gained his commercial pilot licence last year and joined the team at Otago Airspread this year, having gained his agricultural rating.

Des felt ‘‘quite privileged’’ to have a family member coming through.

‘‘It’s nice to know this will still be a family business for another generation.

Rather than having to go out and look to employ a top-dressing pilot, he joked they ‘‘had to breed our own’’ — ‘‘that’s one way to solve a problem’’, he said.

Otago Airspread was one of about only three private aerial topdressing businesses south of Christchurch and it serviced a vast area, from South Canterbury to Northern Southland.

Initially based solely on the Taieri Plain, it had grown to also have operations in Balclutha, Roxburgh and Twizel.

Each individual pilot — there were five pilots and four planes — ran their day, but they collectively worked as a team.

Des described his role as ‘‘sort of like the leader of the rugby team’’ — making sure all the gear was in the right place.

He also dealt with ‘‘a lot of bureaucracy’’, which he reckoned had increased tenfold over the past decade.

Yet the job was still fundamentally the same, simplistically described by him as ‘‘eyes out the window, watch what you’re doing’’.

After 22 years in the cockpit, he still enjoyed the job.

Des continues to farm a 350ha sheep and beef property at Allans Beach, on Otago Peninsula, aided by an employee who works half a day, five days a week.

He loved farming as much as he enjoyed flying, he said, and it was good to have the two businesses — when he got sick of sheep, he could go back flying.

When farmers were doing well, the topdressing business would follow suit and, conversely, when things were not going well in the farming sector, ‘‘generally we’ll be sitting around a fair bit’’.

At the moment, farming was very positive, with good prices, although there was the uncertainty around regulations hanging over the sector.

That was a threat to his top-dressing business, and widespread planting of trees was also a concern.

Otago Airspread still had a lot of traditional hill country farms as clients; generally it was sheep and beef clients and a handful in the dairy industry.

Some of his clients had been with him since he started and he was grateful to have such a good client base, saying it had been a privilege to work for them.

The expansion of the business had also been ‘‘a bit like buying the neighbouring farm’’ as he had taken opportunities as they presented themselves. With those businesses came very good staff which he had been fortunate to keep.

Original employee Peter French (71) was still there — ‘‘he knew Ryan when he was just a baby, now he’s flying a plane’’ — to ask how the young pilot’s day had been when he returned to the Taieri hangar.

Being a farmer himself, he had an empathy for fellow farmers and what they were trying to achieve.

Couple that with excellent staff and loyal clients and it was a good agricultural aviation business, he said.

Ryan, who shared his father’s love of farming, said the father-son duo got on very well, spending a lot of time together, particularly on the farm.

When it came to his own passion for flying, he said he enjoyed ‘‘the whole process’’.

‘‘The whole flying thing, the interaction with farmers, going into the backblocks — you get to see parts of the country most people wouldn’t know existed — that’s pretty special,’’ he said.