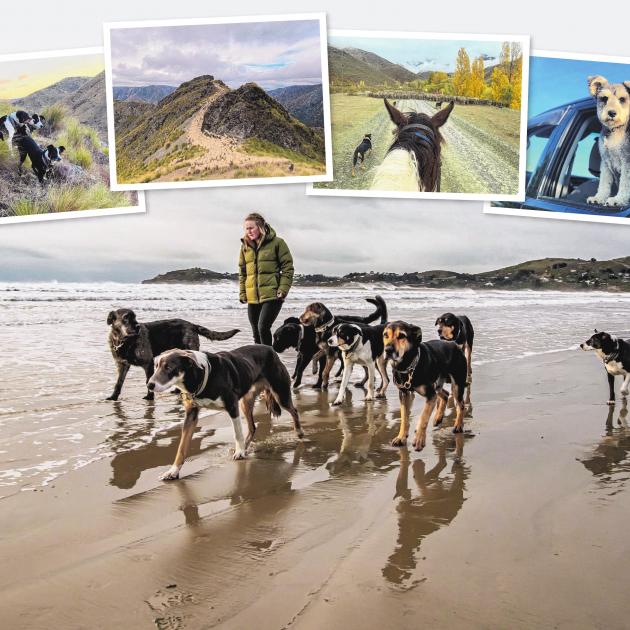 Dogs play a crucial role in Kate Poulsen’s job as a casual shepherd.MAIN PHOTO: KERRI BACK PHOTOGRAPHY/OTHER PHOTOS: KATE POULSEN
Surrounded by her much loved team of working dogs — plus pet miniature schnauzer Mickey — casual shepherd Kate Poulsen reckons she is literally living the proverbial dream. She talks to rural editor Sally Rae about the career she has chosen in the rural sector.

Lockdown doesn’t really mean much is different for Kate Poulsen.

The 25-year-old East Otago casual shepherd is doing a lambing beat at Goodwood "tucked away out of it", which really was not much different from usual.

For her line of work meant that she was often working by herself and, as far as she was concerned, as long as she had her dogs with her then it was "business as usual".

Throughout her school years at East Otago High School, Miss Poulsen always knew she wanted to be a shepherd but she was unsure how to get into it. She grew up on the Taieri until she was about 7, and then on a 40ha lifestyle property at Waikouaiti.

After finishing school, she helped out on farms to gain experience, before deciding she wanted to make "a really good go" of shepherding as a career.

She worked on farms in North Canterbury and Moa Flat before returning to East Otago and she has just completed her fourth winter being self-employed.

She had seen a need in East Otago for such a service, saying a lot of places needed a hand during busy times on the farm, but not necessarily someone employed full-time.

What she enjoyed about the job was the different places she got to go — from as far afield as Gore, Twizel and Arrowtown, as well as around her local patch — which meant variation with climate and landscapes, and it felt like she was away on holiday, she said.

It was mostly mustering in the busy seasons and, in quiet times, Miss Poulsen often ended up doing jobs like fencing or gorse spraying. The best way to learn things, she reckoned, was by doing them.

And by working for many bosses, rather than just one, there was an opportunity for lots of learning. "Everyone’s got their own tricks of the trade," she said.

For Miss Poulsen, the best part of the job, without a doubt, was the dogs. She had a team of nine working dogs, ranging in age from 8 months to 9 years. Then there was Mickey, her pet miniature schnauzer, who sat on the front seat of her ute.

"He seems to think he’s a cut above the rest," she quipped.

While she had grown up with pet dogs, she had been lucky that she had been around the "right people" from the start to help her with her foray into working dogs.

When she first started shepherding and being quite young, dogs could be "really overwhelming" and she found herself comparing herself in that first year to experienced "dog men" in their late 60s and 70s. "I felt a lot of pressure," she said.

"It takes time. Everyone wants to get out there in the first couple of years and have the best dogs and dog trial dogs. It really just does take time," she said.

Thanks to the help from some influential people, including well-known dog triallist Kerry Chittock, from Bannockburn, she was now really happy with the team that she had.

HER huntaways came from Mr Chittock and it was those dogs that gave her the most joy.

"They’ve got to be hairy, I just love a hairy-looking beardie huntaway bitch. I’ve got three of them, they are an absolute hoot. You can’t go past the character of them," she said.

Dog care was a passion for Miss Poulsen, who was known for her immaculate kennel set-up and was an advocate for BlackHawk dog food, which had been a "cool opportunity".

"My parents always said, ‘if you’re going to have dogs, you look after them to the absolute best of your ability’. I think it was the best thing I’d ever been told.

"They are my work tools essentially. You just want what’s best for your best mates. You look after them well and they look after you," she said.

Miss Poulsen was looking long-term for her dogs, ensuring they were set up well for their later years so that they retired happy and in good health.

"For me, I just love happy, healthy dogs. You’ve got to think in the long term," she said.

A perfect day for Miss Poulsen could be either on a horse out in the hills or in a paddock on the flat at Waikouaiti training a pup.

"It doesn’t really matter, just as long as I’m with dogs."

She did several dog trials earlier this year and was placed second in the local maiden at Palmerston. She surprised herself by how much she enjoyed it, having been a little intimidated by the sport.

"You just need to bite the bullet, as intimidating as it is. You’ve just got to give it a go," she said.

As to her future plans, Miss Poulsen said she was asked that question everywhere she worked "and I still haven’t come up with an answer".

It depended what day it was — catch her on a bad day and she might think that a full-time job would be great, but it would have to be the right full-time job to really make her want to do it.

It could be a very busy job, as it was busy times that people needed her, and she also needed to remember to keep looking after herself. But she loved to be busy — in fact she reckoned she needed to be "flat out" to be relaxed.

"When I have the time to start thinking too much, that’s when the wheels fall off. I’m most happy when I’m busy." And when she had her dogs with her, she felt she could "take on the world".

"Give me my dogs, I can literally do anything. Take them away, I become a fragile little person. They become a big part of you."