Living the good life after 'bovis' 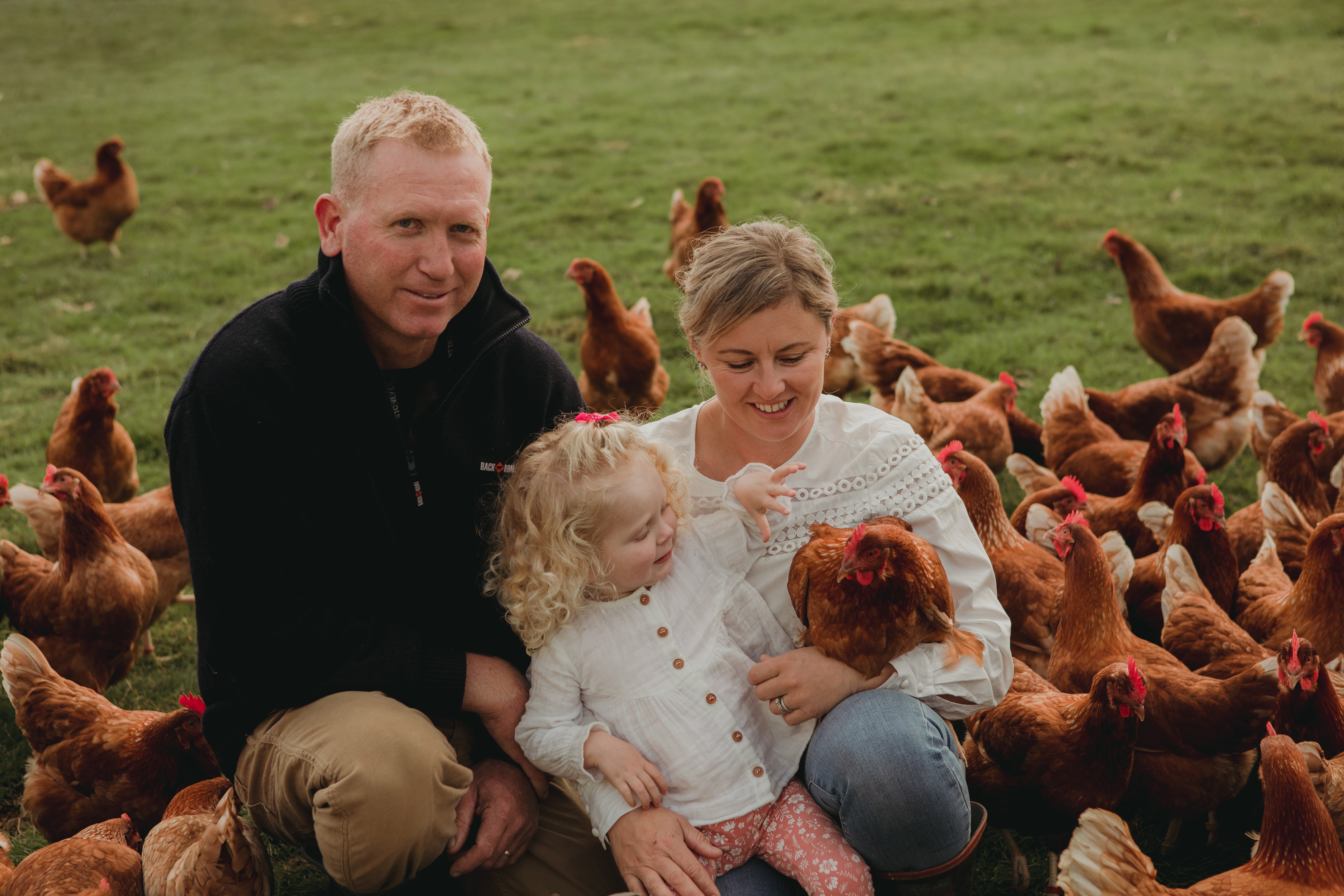 Kelly and Morgan Campbell, with daughter Sage (2), own a free-range egg business in the Waimate district. PHOTOS: SAM CARTER/MOMENT MAKER PHOTOGRAPHY
It’s been a roller-coaster ride for South Canterbury farmers Kelly and Morgan Campbell since their cattle were the first in New Zealand to be depopulated due to Mycoplasma bovis. But they have come out the other side with a new business venture. Business and rural editor Sally Rae reports.

On a lifestyle block in rural South Canterbury, Kelly and Morgan Campbell are living the good life.

Residing in their dream home, surrounded by hundreds of happy hens, their seemingly idyllic existence belies the roller-coaster ride they have lived the past few years.

Morgan Campbell arguably summed it up best by saying: "it’s a crazy story ... with lots of kinks and curves ... along the way. Dead cows, IVF and chickens."

July 22, 2017 is a day that is firmly etched in their memories; the date when the bacterial cattle disease Mycoplasma bovis was declared in New Zealand. It was to have a devastating effect on their sharemilking operation.

But they have come out the other side and Mrs Campbell — who previously thought she would never exit the dairy industry — has made the transition from cows to chooks with the establishment of free-range business Good Life Eggs.

"What’s the saying, where you make the most out of a bad situation? We’ve bought our dream house, a block of land, we’ve got a pretty cool kid, a career we’re loving and we’re strongly focused on being more sustainable and farming our hens in the same fashion."

Mrs Campbell had always been involved in the dairy industry. She grew up on a dairy farm on the West Coast and working in the sector was all she ever wanted to do.

"That was the dream," she said.

She moved to the east coast and met her husband Kelly, and the couple managed farms, contract milked and sharemilked.

Then they got hit by M. bovis. 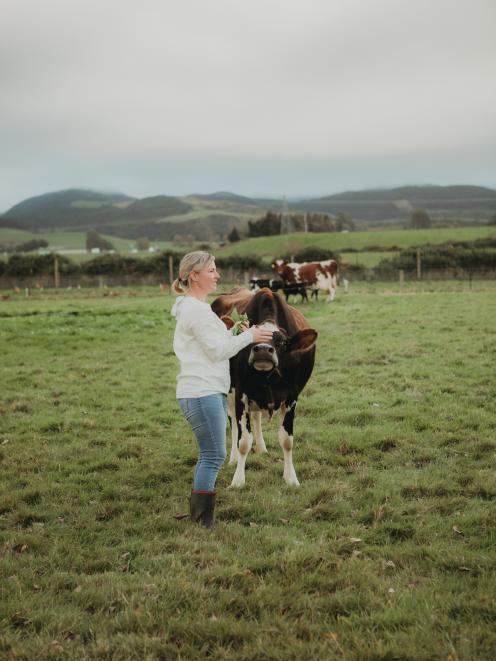 Morgan Campbell describes the cattle on the property as her ‘‘therapy’’.
The outbreak of the disease, Mrs Campbell stressed, was "no fault of anybody" — "it was just an absolute freak thing to happen"— but the effect was devastating for the couple, who were sharemilking in South Canterbury.

They were the first in New Zealand to send their cattle to slaughter. Depopulation started in November and took nearly a month. It was, as she succinctly put it, "a shitty shitty time".

"My cows were more than cows. I just generally was a recluse that lived with my cows. I loved my cows," she said.

The couple owned about 575 cows and leased a further 400, but the animals sent to slaughter numbered about 1700, including young stock and beef animals.

"It was awful. There’s no way to explain how I coped. I remember people asking if I was OK — honestly, I lived in a different realm at that time," Mrs Campbell said.

"I don’t really know how to explain how it all happened. It was a living nightmare. It was an odd feeling. It was happening around you but you kind of didn’t really absorb it," she said.

Sarah Barr, who was at that time involved with the South Canterbury Rural Support Trust, was her "lifesaver", checking on her every day and ensuring she was fed.

The Ministry for Primary Industries’ handling of the M. bovis response has been widely criticised by those caught up in it, and Mrs Campbell concurred, describing it as "bullshit".

It was three years before they were fully paid compensation — "because they didn’t know what a 50:50 sharemilker was".

It was probably the worst farm to be done first, because it was complicated with lease cattle and run-off blocks but "they just couldn’t work it out".

"You had to stand up for yourself. If we didn’t, where would we be now?"

Their cattle were dead and they had no income, so they took the first job in the dairy industry that was available. However, in such a damaged state, it was difficult to say they loved doing it, she said.

Amid the stress and heartache, there was a shining light — the birth of the couple’s daughter Sage in November 2018 after a five-year journey through IVF treatment.

There was a new job and a new baby — "I don’t think even the most stable person would have found that relaxing," Mrs Campbell said — and it was the arrival of their daughter that made the couple realise they needed to make change.

So they slowed down their pace of life and bought a 5.5ha lifestyle block at Hunter, near Waimate, with the idea of becoming more self-sustainable and living the "good life".

Had it not been for M. bovis, she acknowledged she would never have exited the industry.

"I miss my cows daily but I definitely have a different perspective," she said.

She started with 70 hens in 2019, when Sage was a baby, and the initial idea was it was going to be a "stay-at-home-mum business", producing enough money to compete with a minimum wage working in town.

But it kept growing, and gaining a following, and she discovered she was really enjoying it.

Heading into this winter, she would have 1700 chooks and it was a "one and a-bit man business".

Mr Campbell, who continued to work in the dairy industry, was the "bit", doing all the heavy work.

She was now making deliveries from Hampden to Temuka and had picked up the odd supermarket. Interest continued to grow as people saw how they ran their business.

They tried to farm well above industry standard and the birds had ample space. They were moving into planting more different species, that were more digestible for them to eat, to forage on.

Mrs Campbell also grew masses of vegetables that she shared with the hens.

"I don’t find it wasteful to give them a lovely big courgette or pumpkin. They get the same food we eat out of the garden. We’ve tried to farm best practice and beyond." 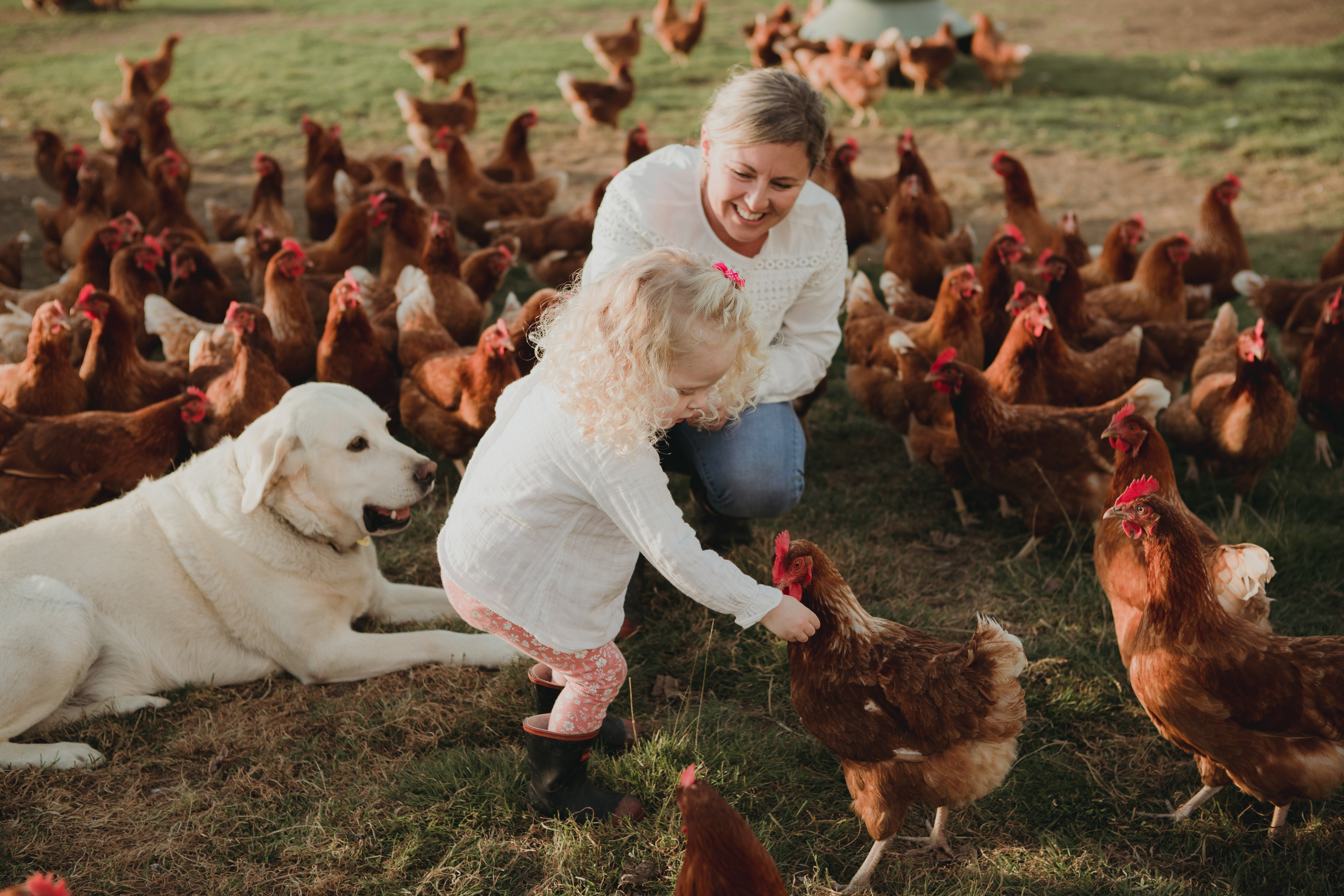 She acknowledged there had been "ups and downs" and mistakes made along the way as she got to grips with a new industry. She would never kill any of her birds and they were all rehomed.

Learning about keeping the quality of eggs to the standard they needed to be was something they both had to learn but she felt they were probably on top of now.

They described their operation as sustainable and environmentally sound. The waste was aged and reapplied to the land.

Mrs Campbell still had five nurse cows which were her "therapy", but she enjoyed her feathered flock.

"They are funny, they are cool. Not like big docile old dairy cows. It’s a different way of life, it’s a different lifestyle ... I still get up early because I think that’s ingrained in me," she said.

That also meant she could do three hours of work before Sage woke up, so she got to spend more time with her daughter — something that was important to her.

"I didn’t want to not spend time with my baby after waiting for her for so long. I wanted something we could do with her being a part of it."

And young Sage was a fan of the farming lifestyle.

"That kid is half chicken," Mrs Campbell laughed.

"Sage is the light of our life ... [she] is amazing. Without her, I don’t know we would have made such drastic changes. We’re so grateful we have made the changes because we just have a different mindset in life."

At the moment, they were consolidating but, in the future, there was scope to expand.

"Just wait and see really, watch this space. I’d like to think we get to a point where we can both be full-time at home," she said.

Their experience with M. bovis had not dented Mrs Campbell’s love of the dairy industry, and she still milked cows locally every second weekend.

"I love cows, they soothe me," she said.

Had M. bovis not come along, they likely would have been the "classic story" in the dairy industry — provided the payout stayed right — moving hopefully to owning their leased cows and eventually farm ownership.

On reflection, they were "full of dreams" prior to M. bovis — "but it’s damn near impossible when you think of it now", she said.

"I miss them [the cows], but I just like coming out the other side. I’m a different person. I feel like I’m probably living more now.

"You’re learning all the time, doing things you didn’t know you were capable of."