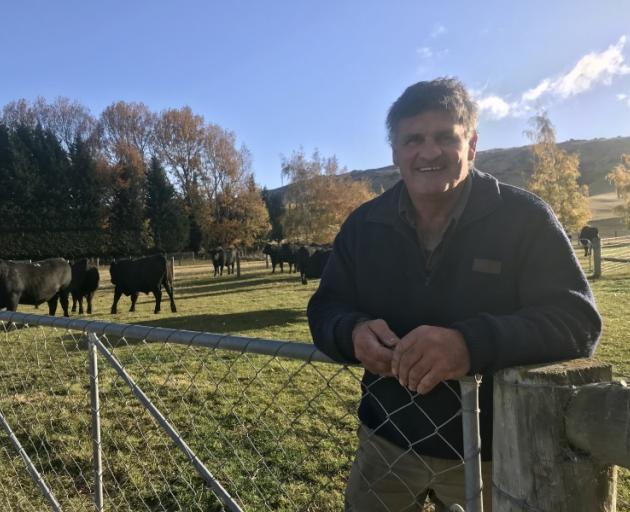 Changes . . . Wedderburn Angus breeder Stu Duncan is looking at a slightly different way of selling bulls this year. PHOTO: SUPPLIED
It has been a case of shut the door and shut the gate for Maniototo farmers Stu and Lorraine Duncan who have been doubly affected by the Covid-19 lockdown.

They run Wedderburn Cottages, offering tourist accommodation predominantly for the nearby Otago Central Rail Trail, and farm sheep, beef and deer at Wedderburn, including an Angus cattle stud.

That means uncertainty about the effect the impact of the restrictions will have on both businesses.

Mr Duncan, who is also a Central Otago district councillor, is preparing to hold this year's Penvose bull sale online, rather than on-farm.

He is offering 35 rising 2-year-old Angus bulls and the sale has been set down for this Friday.

However, while an on-farm auction was his preferred method, it depended on what the rules were in place around Level 2.

Speaking prior to the Government's announcement, he was unsure whether an on-farm auction could or should go ahead if and when the country moved to Level 2.

‘‘We encourage agents to view the bulls on-farm (in a safe way) and we will wait and see what happens.

It might be possible to hold auctions out in the paddocks but many of his fellow breeders were also preparing their catalogues for online sales platforms such as PGG Wrightson's Bidr.

‘‘We will have to livestream the process, although it is a pretty common set-up these days.''

The couple's accommodation business bookings had ‘‘taken a hit'' as March and April was usually their busiest time.

However, October and November bookings were picking up and those intended for March and April had been rebooked for the same time next year.

‘‘If we do open up with Australia, that will make a big difference and it is a key market for us.''

As for farmers, it was difficult to tell what would happen in the next 18 months.

‘‘People are optimistic and a wee rural town like Ranfurly is pretty resilient, with a pretty good community spirit.

‘‘For those who live in isolated areas, nothing much has changed.’’

The response had changed some communities to what they were like about 25 years ago, when more people chose to stay at home rather than go out, he said.

‘‘Just keep your chin up. Shop local and look after your neighbours and the businesses.’’