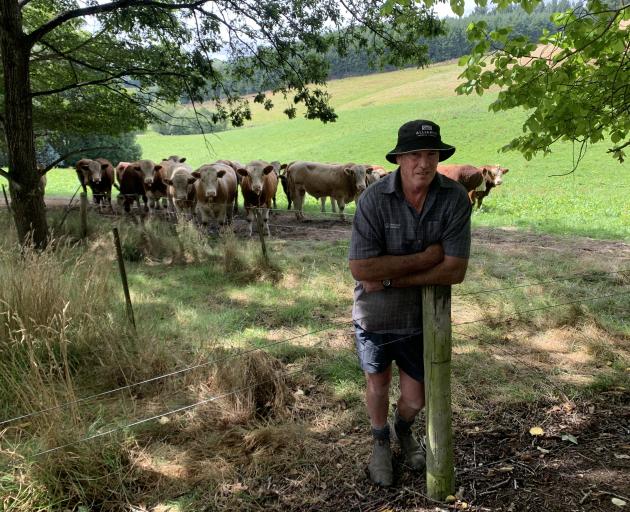 Stud owners Dave and Kath Keown will present their final catalogue of 18 rising 2-year-old bulls on their farm at Raes Junction.

A dry autumn had stunted grass growth on his farm this season.

Consequently, the bulls were lighter than previous years but were an even line-up, in good condition.

The bulls had been tested by the dry conditions and passed, he said.

Tomorrow’s sale would be the last because the Keowns had sold most of their 1600ha farm — retaining 80ha of flat land and their home.

The sale meant they did not have enough space to run the cows required to continue the stud.

"I don’t have the hill to winter the cows on."

All of the annual bull sales had been on-farm, except the first three.

The first sales were held in conjunction with Simmental bull breeder Simon Cox at Mt Benger Saleyards in Teviot.

When Mr Cox sold his farm and moved out of the district, Lone Pine stud had got bigger, prompting a decision to hold the annual sale on farm.

He thanked his clients for their support over the years.

Mr Keown featured in a Southern Rural Life article talking about his journey after being diagnosed with cancer at the age of 43.

He beat the cancer and, almost 20 years later, it had not returned, but that did not factor in the decision to sell the stud.

"It was mainly my age and to step back."

He was not stepping away from farming and bought a sheep and beef farm, as part of an equity partnership with another couple.

The new farm was on "easier country" in Wilden, West Otago.

On the new farm, the stock they ran included fattening Simmental cattle.

"That’s made it interesting, seeing the other side of the Simmental and how well they do with finishing."

He hoped the change would give him more time to compete at dog trials.

"I don’t seem to have much time for it at the moment, but I hope it’s going to happen."