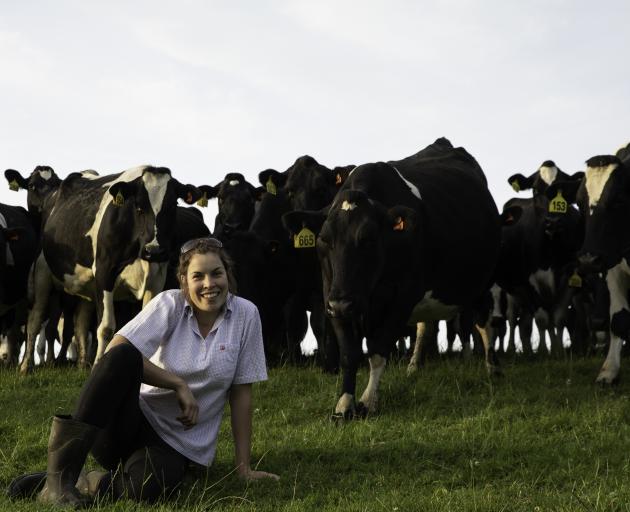 Two weeks after returning home to Scotland, she knew she wanted to come back.

"I knew then what I wanted to do. There are just so many opportunities here," Ms Booth said.

About the same time, Matthew Haugh, a dairy farmer near Heriot, offered her a job, so she jumped at the opportunity and moved back to New Zealand permanently.

Five years later, she is in her first year managing the 290ha Cottesbrook Farm for Mr Haugh.

In addition she has gained a partner, Gordon Preedy, a horse called Legacy and Weasel the dog.

Ms Booth was born in Yorkshire and her family moved to their dairy farm in Scotland when she was 12.

"My brother was getting the family farm so there was no chance for me. I knew I would struggle to find a position [in the UK] where I could work up to manager," Ms Booth said.

"This is my first proper season as farm manager, but I have been herd manager for the past few years."

She is president of the West Otago Young Farmers Club, and also placed third in the New Zealand Dairy Industry Awards Southland/Otago farm manager of the year competition this year.

She entered to get feedback about what she was doing and find out more about her strengths and weaknesses.

"I also wanted to meet other people," she said.

The farm supplies Mataura Valley Milk, and calves in autumn and spring. They employ three full-time staff and a work student.

They milk 1050 cows year round, up from 890 last season, as they want to convert from all A1 milkers to A2 cows within three years.

The target is a 480kg cow, and they want to get more than 600kg of milk solids per cow every year.

"We aim to get 1.3kg of milk solids per kilogram of liveweight compared to 1.2kg last season.

The business has a 64-bale rotary shed with a Protrack system and Cow Manager, with ear tags that provide an individual animal’s heat and health alerts.

There is another run-off as well as two leased blocks where they run 600 beef cattle.

Cows are cropped on oats and swedes.

They have a zero bobby calf policy, as they are reared to two years and then sent to the works at about 550kg to 650kg.

An umbilical effluent dispersal system was used, with one tractor pumping from a pond along a 1.5km pipeline to another site where another tractor pumps it out to spread it.

"We can do four to five paddocks in half to one day, so it is a lot quicker," she said.

‘Not many downsides’ to farming