Master farrier keeps his foot in the industry after 51 years 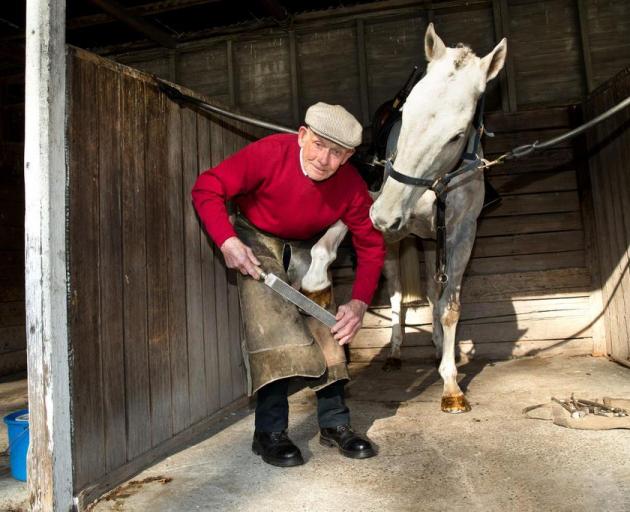 85-year-old farrier Brian Wilson is plying his trade as the plating inspector at Riccarton on race-days. Photo: Martin Hunter
Brian Wilson (85) is a name anyone in the horse racing industry will recognise. The former farrier can still be found at Riccarton as the club’s plating inspector. On Saturday, August 10, race three in the Grand National Festival of Racing’s first event was named ‘Brian Wilson 51 years a farrier’ in his honour. Gordon Findlater catches up with him

Can you remember the first time you shoed a horse?

I would have been 14 or 15 on the West Coast and one of the guys that did have a horse was Jock Butterfield, who played for the Kiwis, and he wanted to put some shoes on this horse, so they gave me some tools and to this day I feel sorry for the horse. That was my first experience of shoeing a horse.

What was it like growing up on the West Coast back then?

I quite enjoyed it, but there wasn’t a great future. You worked in the forestry or the bush as we called it, or the mines. I came over here in 1951 and that’s when I really got involved in the horses. My brother was an apprentice jockey, so I thought, well, I’ll see how I go, but it wasn’t to be.

How did you become a farrier in Christchurch?

When I was apprenticed, I lived in Rangiora and my boss had horses trained in Christchurch here at Riccarton. That was Bob Wilson and his son Bobby was the farrier there, so I had to spend time with him and virtually followed through the entire way. The Wilsons were no relation, but they were close friends. So that’s how I got into the trade.

How has the industry changed since you started?

You don’t have the same blacksmiths work as you did in the past. You had to make all your own shoes out of bar steel. It was all physical. You can buy all these shoes already made today and on top of that the steel companies don’t import steel because there’s not enough demand because we’ve got such a great range of factory made shoes. 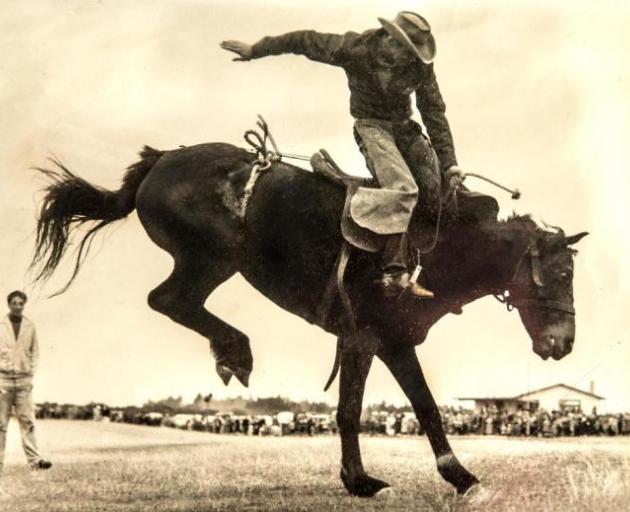 Brian Wilson rides a bucking horse during a rodeo in Rangiora in the 1950s. Photo: Supplied via Star.Kiwi
What did the average day look like when you started?

I would make shoes from about 6.30am until 8am and then have breakfast. Then I’d go out because you had to travel to various places, you went to the property they were on or I’d go to the stables if they were training here at Riccarton.

Do you have a favourite horse you’ve been a farrier for?

My favourite horse overall was a horse called Commissionaire. He was the top weight-for-age horse in New Zealand at the time. He was something special. I think he could have just about put his own shoes on.

What do you think made him special?

He just had so much presence. All good horses have good head pieces, you never see a mad champion.

What’s one of the oddest jobs you’ve done during your time?

I had one new client and I met him at the track on a Tuesday morning and I shoed his horse up there. I must have done it about three times and he rang once and asked, ‘can you come to my stables’ and I said ‘yes, whereabouts are you?’ He said ‘up Buchanans Rd’. So I go past the number and it’s just a state house and I thought what’s wrong here. Anyway, I decided to check it out, so I knocked on the door and his wife came out. I said where are your stables? She said around the back. I went around the back and there was the horse in its stables, which was a rotary clothes line and a wood shed.

When did you stop working full-time?

Five years ago I finished at Addington after being there for more than 20 years. I’ve now cut right back down. I still get asked the odd time to do some special shoes. I’ve virtually retired, other than a few ponies I trip.

What do you enjoy doing with your spare time now?

I love gardening and I play indoor bowls on Monday afternoons for the Irish Society. We also do a little bit of house-minding for friends that have horses and can’t get away for a holiday because they’re on a lifestyle block.

I’ve been told they call you iron grip because you have an incredibly strong handshake. Is that correct?

Yes, it’s just one of those things, I don’t realise I’m gripping another person’s hand so hard. The friends you haven’t caught up with for some time, they can be a bit tentative to put their hand out to you.

In your younger days you competed in rodeo. How did you get into that?

It was actually at a race meeting in Westport. There was a two-day meeting over there, and on the Sunday, they had a rodeo out of Cape Foulwind. They had a big bull called Pinocchio and the owner put up £25 – that was back in the 1950s and was a lot of money – if anybody could ride him. Anyhow, I did ride him so I got my 25 quid and that was almost a year’s wages.

How long did you do that for?

I did that for about five years. I stopped when I met my wife Andrea and we got engaged, I thought it was a bit of a risk.

What’s been your trick to remaining actively involved as a farrier at your age?

Did you do a lot of cycling when you were young?

I was only a school boy, but on a Saturday there was a cash cycling club on the West Coast and I won a number of races. The big one was Jack Davidson. He had the Australasian Hotel and was the racing man. We had the Davidson Cup for most points over the year and I remember getting beaten by one point.

When did you find out there was going to be a race named after you?

They told me early in the week that they would be having a race named after me, but I never knew that they were going to have a presentation as well. It was magnificent and such a thrill.