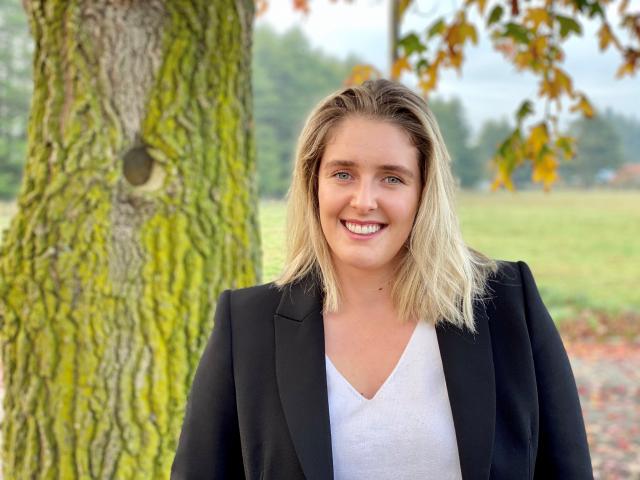 Full circle ...Lucy McPherson's life has gone full circle, after landing a role at the Foundation for Arable Research three years ago.PHOTO: SUPPLIED
The last thing Lucy McPherson expected when she left school was to be working in the arable sector.

The Foundation for Arable Research (FAR) communications and events co-ordinator was brought up on a sheep and cropping farm near Leeston.

‘‘I had big plans of doing architecture and interior design at school, but I made a last-minute decision to do law and commerce at Victoria University, as I thought law might have better job prospects than architecture.

‘‘It was just after the earthquakes and everyone wanted to get out of Christchurch.’’

But after one year, Ms McPherson realised law was not for her, so she switched to a communications degree at Massey University’s Wellington campus.

‘‘I was very much a converted city girl, but Wellington just didn’t do it for me and I just couldn’t picture myself working for a big law firm in Auckland. For some reason I hadn’t thought of that before I got to university.’’

Her rural background meant she had no difficulty finding summer jobs working on the land and the greater flexibility of the Massey University structure allowed her to complete her final year studying from home, back in Canterbury.

‘‘I realised that while I was in a processing job, but there were opportunities for marketing and communication jobs in the rural sector, and you didn’t necessarily have to work in the city.’’

Unsure what to do with her career after she graduated, Ms McPherson packed up and went on her big OE.

While overseas, a job came up at FAR, so she applied and had an interview via Skype from Italy.

‘‘It was at midnight, it was 40 degrees outside and I was staying in an apartment with no air-conditioning.

‘‘I don’t have an in-depth knowledge on the technical side, so it has been a fast learning curve.’’

Three years on, she is now living at Tai Tapu with her partner on a sheep and beef property, just across Te Waihora Lake Ellesmere from the farm where she grew up.

‘‘I have come a full 360 degrees. Somehow I have ended up back where I started,’’ she joked.

Ms McPherson said the lesson from her experience is to ‘‘go with your gut’’, rather than following the direction laid down by others.

‘‘Agriculture wasn’t a subject at school. I was one of 25 girls who petitioned to have an agriculture class and our young farmers club at school flopped because there wasn’t support from the hierarchy because they didn’t see it as something that fit with their culture.

‘‘So we all went off to study subjects like law or commerce, because that was what you did. But most of us have ended in agriculture or food sector jobs.’’

She has found that skills are transferable, to the rural sector.

‘‘I learnt that you don’t close off opportunities, even if you think you can’t fulfil them.

‘‘I didn’t have a science or an agricultural science degree and it didn’t matter, because everyone is so knowledgeable and willing to help.’’