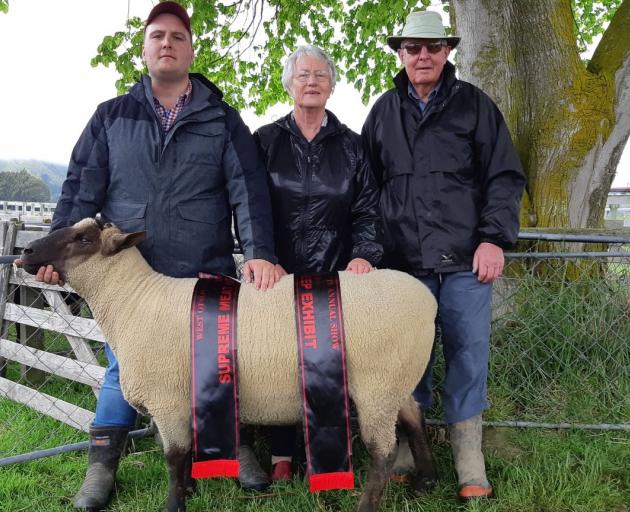 Doris and Trevor McCall, of Charlton, are handing over their Myola South Suffolk stud to their grandson Matt. The stud won the supreme meat breed title at the West Otago A&P Show in November. Photo: Supplied
After more than 40 years of breeding South Suffolks, Trevor and Doris McCall have decided to pass their Myola stud on to their grandson, Matt.

They would be adding his name to the flock book in March, giving him about 25 ewes and some of the older sires.

However, they will see the sheep every day as Matt will run them on their 33ha property at Charlton, near Gore. 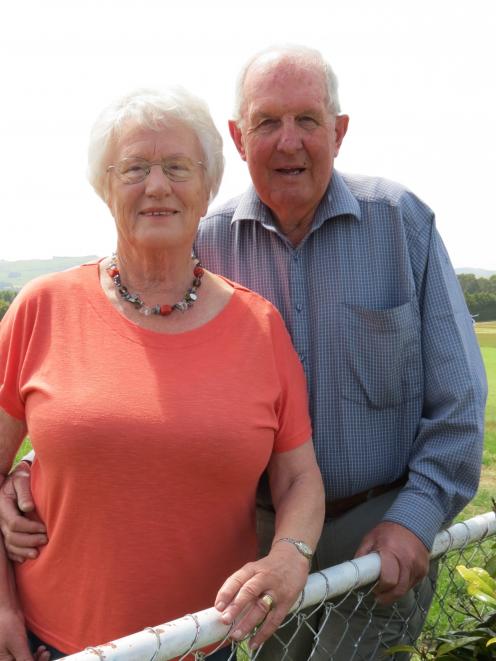 Trevor and Doris McCall will still be keeping an eye on their successful Myola South Suffolk Stud, once grandson Matt McCall takes it over. He is to run the stud’s sheep on his grandparents’ property. Photo: Yvonne O'Hara
They would still be on hand to advise Matt and ‘‘be a bit of a nuisance’’, Mr McCall said.

He said his grandson, a stock drafter for Silver Fern Farms, was a good judge of stock.

‘‘He won the Young Farmers’ stock judging competition one year, and came second in the wool.’’

Mrs McCall started the stud in 1978 while they were on their Benio sheep and beef farm, initially buying eight ewes from Ashburton.

‘‘They are a meat breed and have good survivability and good conformation and they are the traits we breed for,’’ she said.

The McCalls retired to their Charlton property in 2000, bringing their South Suffolk stud with them, as well as their Romney stud, but after a few years gave the latter to their son, Doug, to look after.

Five years ago they established a Charollais sheep stud, and those ewes and two-tooths rams will also be sold.

They have about 80 South Suffolk ewes, 25 two-tooth ewes, and about 50 ram hoggets, and the lines have been culled heavily in preparation for selling.

Apart from the 25 they are giving to Matt, most were sold.

Mrs McCall said they intended to replace the stud sheep with more flock sheep and continue to run them on the property.

Mr McCall became a formal stud partner in 2010 but had been involved with the stud for many years.

Mr McCall said he was ‘‘just the worker’’.

‘‘These days my health is not all that good and the rams can now tell me what to do, rather than me telling them what to do.

‘‘Common sense has got to prevail.’’

During their breeding career the stud has produced award-winning championship rams and ewes, including the supreme champion at last year’s West Otago A&P Show.

Their sheep have also won awards at various shows most years.

They send their best ram lambs to Lincoln University to be CT-scanned to determine carcass yield and fat content.

Mr McCall was recently made a life member of the Gore A&P Show after more than 50 years of service and has also been involved with the Gore Ram Fair.

Mrs McCall was secretary for the southern area for several years.

Mr McCall said when he first started with the Gore A&P Show, only about 150 sheep were entered, but he found face-to-face encouragement of potential entrants increased that number to about 650 a year.

She volunteers for the Blind Foundation, belongs to Rural Women New Zealand and puts together the bulletin for the Pakeke Lions Club.

‘‘We have lots of grandchildren who play sport every Saturday and we have to spread ourselves around to get to all the games,’’ she said.