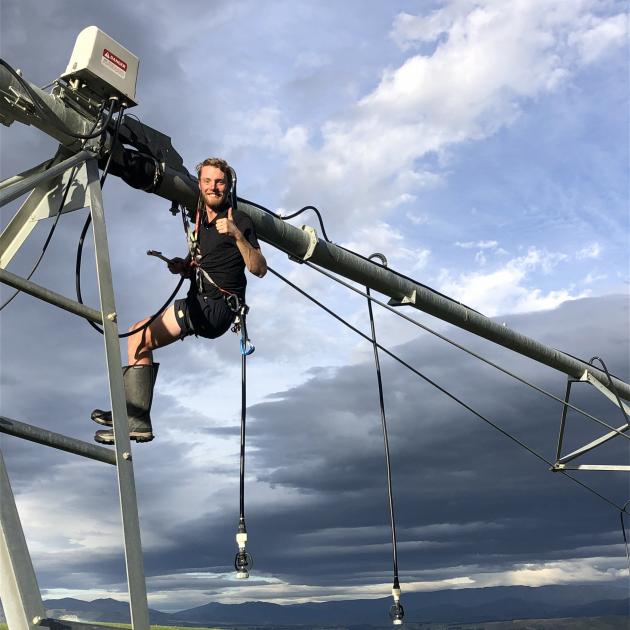 Lincoln University student Cameron Butterworth, who is spending the summer on work placement at Tinwald Farm, used his climbing gear to repair an irrigation pivot last week. PHOTO: SUPPLIED BY AMANDA CURRIE
Amanda and Adrian Currie, who are focusing on improving soil health and diversity on their Luggate farm, are happy to host work placement students. Yvonne O’Hara reports.

Amanda Currie has employed a ‘‘scattergun’’ approach to developing their farm, as she says she does not have time to take a linear approach to her projects and trials.

So rather than doing one thing at time, she is doing several things at once, and is looking forward to the combined outcomes.

She and husband Adrian bought Tinwald Farm, near Luggate, in 2012. It was run by a manager while they lived in Christchurch.

However, they wanted to spend more time on the property and take an active role in its operations and moved down in 2019.

Regenerative farming concepts appeal to them and Mrs Currie has focused on improving the property’s soil health and diversity, as they work alongside manager Jason Sutherland.

‘‘Soil biology is so important — it is the most important asset on the farm,’’ Mrs Currie said.

The 750ha property includes 350ha under pivot irrigation with the balance in dryland and 20ha planted in pinot noir vines.

They hope to have their first vintage made this coming season.

The pivot has been the source of excitement as last week it blew a hose and generated a geyser.

Lincoln University student Cameron Butterworth, who is on a summer placement on the farm, put on his rock-climbing gear on and climbed up to repair it.

The couple run 200 beef cows and about 3000 sheep and recently bought a flock of 150 dairy ewes and a milking plant.

Once the sheep start milking in the spring and they have completed their dairy shed, they will make blue cheese. They are building a cheese cave.

The Curries have bought two tiny homes, one to live in and one for future staff. They are looking at adding more.

The property was originally farmed conventionally but they have moved away from synthetic inputs to more natural ones including adding manure, Effective Microorganism blends and fish hydrolysate, to boost the biological activity in the soil.

They do not cultivate the soil, which eliminates erosion, and they use multispecies pasture plants in the paddocks to improve diversity.

They intend to install solar panels on the new dairy shed, which will eventually power that, the tiny homes and the pivot.

‘‘We are trying to use things that we get for free, like sunlight, nitrogen, CO2 and water,’’ she said.

They also use as much farm waste as possible as inputs, including putting wool under the grape vines as a weed suppressant. When they start sheep milking they will add whey and sheep effluent to the soil.

They are having a kiln built to make biochar from waste wood, to enhance the soil.

‘‘Some people think regenerative farming is too New Age but it is gaining traction. We are at the start of our journey,’’ she said.