Old hands call for youth to get involved 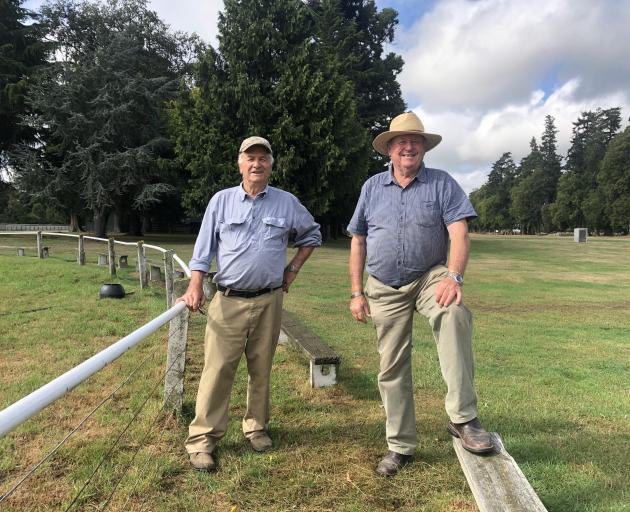 Peter Meyer and Willie Ritchie look back fondly at their A&P Show servitude.
Two long-time patrons of the Temuka & Geraldine A&P show are calling for youth to ensure the future of their show.

Groundskeeper Peter Meyer and retiring ringmaster Willie Ritchie have nearly 100 years of history at the Winchester show grounds, fondly looking back for keys to a stronger future.

‘‘1954 was my first show here; my parents were every much into riding and my Dad had a couple of good horses,’’ Mr Ritchie said.

‘‘My sister and I used to have to ride to school, but I gave it all up to play sport. I did not have the time to continue which, looking back, makes sense with the low numbers trend we have now.

‘‘Back in the 1970s there would be 80 ponies competing .. . I think if you are committed to showjumping, it is very hard to participate in other sports any more.’’

The former ringmaster is handing the reins down to Laura Pattie after 20 years in hope she can bring new life to the event.

‘‘I was rung up one night and told I was to come to a meeting so many years ago. I think committee members were revamping the horse section of the show and I was on the South Canterbury Pony Club as commissioner. Next thing I know I am in the committee and ringmaster,’’ he said.

‘‘It was an Irishman, Thady Ryan, hell of a nice guy. He had been fox hunting in Ireland for many years. I said to him, ‘who is going to run the ring’ and he said ‘you are going to.’ I told him he could go back to Ireland,’’ he laughed.

‘‘I tried to give up ringmaster twice and it didn’t work. Laura Pattie is taking over but I will help here and there.

‘‘She is young and we have to keep youth, that has been our ongoing problem with this show — not bringing youth on board — and I really hope we are doing the right thing. It has been our problem for years.’’

‘‘The older you get, the less changes you like. But change does not worry me too much, because I know you have to ...

‘‘We could not be happier now [that] the young ones are coming on board now.’’

It was the ringmaster’s job to ensure that everything ‘‘runs on time and without problems.’’

‘‘This is not my final year, I will not just throw it away completely — the ringmaster needs help and I am happy to play my part where it is necessary.’’

Mr Meyer took over as groundsman from Mr Ritchie 10 years ago, although he had been assisting for years, and said strategic planning and technology made his job easier.

Mr Meyer competed in the show in the 1960s and since moving back to Timaru for retirement, he has become involved again.

‘‘We have sheep in here all year round to chew on the long grass and I move them around with electric fences, which means less mowing to be done.

The Winchester showground is now used for swap meets and by motorcycle and vintage machinery groups.