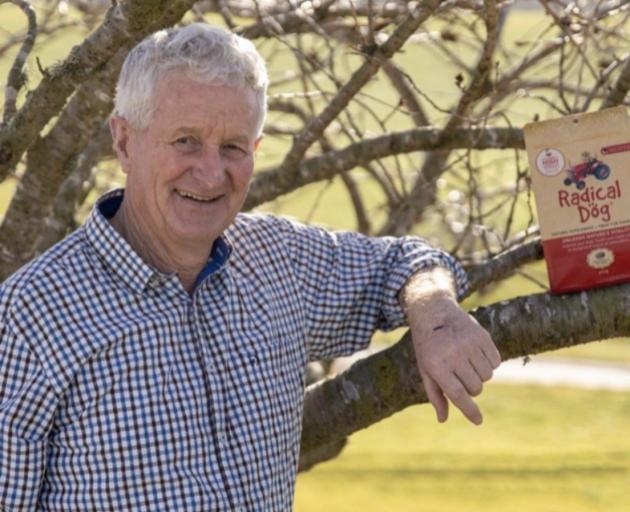 John Newlands with a bag of Radical Dog, the tart cherry dog food. PHOTO: SUPPLIED/SHOPBOX
There is a saying, you can’t teach an old dog new tricks, but after turning to pet food production after 50 years of farming, John Newlands may beg to differ. He talks to Ashley Smyth about how Radical Dog started, how it is going and where it is heading.

When it comes to food for dogs, Radical Dog could be the pick of the crop.

The dog biscuits are made using Montmorency tart cherries and are the brainchild of John and Maureen Newlands, of Incholme, near Maheno.

In the late 1980s, the couple were considering options to integrate something different into their farming business which used their irrigation more efficiently, and they wanted grow something high yielding and profitable, within a small land area.

‘‘We had a prerequisite when we started that whatever we grew had to be healthy for the human body, had to be mechanically harvested and there had to be a demand for it,’’ Mr Newlands said.

Before Google existed, hours were spent coming up with a list of ideas, and years were spent trialling those ideas to differing degrees. Montmorency cherries eventually came out on top, and the Cherryvite business was established.

‘‘So we put [the cherries] in a lot of high-end supermarkets in New Zealand. But one of our problems was we didn’t realise how difficult it would be to educate the New Zealand people on the health benefits of tart cherries.

‘‘They all knew about sweet cherries — nice to eat, but not a lot of goodness — whereas tart cherries are, as they sound, bitter to eat, but packed full of health-promoting properties.’’

The Newlands found a niche market among Eastern Europeans living in New Zealand, especially Christchurch, as it was part of their staple diet.

‘‘But, unfortunately, when the earthquakes came, that turned everything on its head and we lost most of our business, just like that.’’

Meanwhile, the New Zealand beer industry was also exploring the use of tart cherries, after seeing the success sour beers were having overseas.

‘‘They consumed everything we could produce ... So that went very well, and then our dog biscuits came along.’’

The dog biscuits were a bit of an accident, Mr Newlands said.

‘‘The farm dogs and our companion house pet would come with us when we were picking cherries. And the first year, we didn’t realise, but they were just scoffing all the cherries under the trees, stones and all.

‘‘It wasn’t until the second year, we realised ‘wow’, these dogs were looking brilliant.’’

They talked to companion dog breeders, to gauge interest in dog biscuits using the cherries. They showed interest, provided the dogs would eat them, he said.

‘‘At that stage I’d been farming in excess of 50 years, so I thought I still had some life left in me yet for a new venture, and we decided to give it a go.’’

It was by no means a straightforward exercise and animal nutritionists, told them they were ‘‘dreaming’’ — ‘‘you couldn’t put fruit into dog biscuits, and all the rest of it.’’

But eventually they found someone willing to help.

The next couple of years were spent perfecting the product. They would make a batch in the kitchen, send it to Massey University for testing, and when it was sent back, try again.

Once the right recipe was found, a factory was established on-farm, in an existing building.

The next hurdle was how to market a product that was completely new to the pet food market. They had ‘‘perhaps underestimated’’ that difficulty, Mr Newlands said.

The year they launched, ‘‘hundreds and hundreds’’ of samples were handed out at the Wanaka A&P Show, but they had very little response.

‘‘That really was an expensive publicity exercise and it didn’t go down too well. All people wanted was freebies.’’

Production ticked over slowly. Biscuits were baked one day a week. And then TVNZ’s Country Calendar came calling.

‘‘Everybody was totally against it, didn’t want to do it.

‘‘We’re not extroverts, we’re all introverts as a family, we all like to keep low-key.’’

But after some gentle persuasion, the family came around.

Filming lasted four days. The crew came for the spring blossom, and then again for the summer harvest.

‘‘They had pre-warned us that it would be a boost to our business. But we never in our wildest dreams realised what it would do.

‘‘On our website, there’s a place where you can put a wee tick, ‘where did you hear about us’, and I think 50% would still be Country Calendar.

‘‘So it just went gangbuster. It was the weekend before Easter weekend, and we just spent the whole week dispatching. So that really put us on the map.’’

There was still work to be done, but as time went on, less of it was spent chasing new customers, he said.

‘‘Now we have prospective customers coming to us.’’

Radical Dog was stocked South Island-wide by Foodstuffs supermarkets, and they were looking to do the same in the North Island. It was also being exported to Singapore.

It had taken customers some time to appreciate the product was New Zealand-made.

As well as being a treat, it was a suitable complete food and supplement and was very high in natural antioxidants, Mr Newlands said.

It was accredited by the American Association of Feed Controls, which meant it contained a ‘‘certain level of goodness’’.

Mr and Mrs Newlands, their son Snow and his wife Nicola all owned quarter shares in the business, while Snow and Nicola continued to run the farm.

Options for the future of Radical Dog were landing on Mr Newlands’ desk and ‘‘look exciting’’, he said.