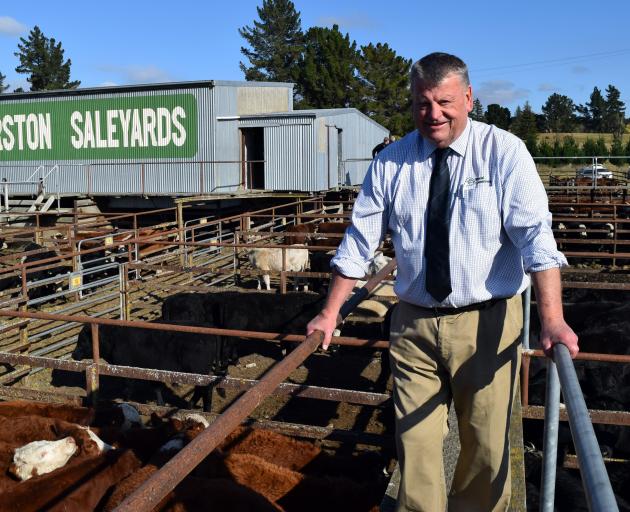 In his final year of secondary school in the Maniototo, a livestock agent floated an opportunity to enter the profession.

In the role, he visited Burnside saleyards and realised he preferred being outside with stock rather than inside an office with paperwork.

About a dozen butchers would attend the saleyards, buying the fat sheep and cattle, many which had travelled to the saleyards by rail.

He left Dunedin after a couple of years when opportunities became available to work as an agent in the regions, including Heriot, Roxburgh and Lawrence, until 1980.

In his career as an agent, he had worked for six companies and had two employers.

Under the Reid Farmers umbrella, he worked as an agent for Stringer & Co in Waimate for seven years.

He then worked as an agent for Reid Farmers in Ranfurly between 1987 to 2000.

In 2000, he shifted to Oamaru to work as an agent for Reid Farmers, just before the company merged with Pyne Gould Guinness.

When Pyne Gould Guinness merged with Wrightson, he worked for the new entity, PGG Wrightson, for a year before accepting an invitation to move to Rural Livestock in 2006.

"I could see the calibre of the guys in Rural Livestock and I knew it would work, but I was a bit nervous. I was in my 50s then, so it was a big move."

He decided to change employer because he did not agree with the merger.

"I’m a believer in the smaller independent companies and they just got too big and I’m sure a lot of farmers at the time felt the same way."

In his existing role, he lives in Oamaru working with clients between Kurow and Waikouaiti.

He enjoys working with stock, being in the outdoors and the variety of the work.

"No day is the same — you can be at a saleyards one day and in the hill country the next."

Although you were an employee, the job had the flexibility to "make your own day".

"I enjoyed that side of it."

The climate was one of the biggest challenges of the job because it could create pressure for agents and farmers, forcing a need to sell stock, although more irrigation in North Otago had improved the situation.

Irrigation, in areas such as the Maniototo, had extended the season to all year round.

Once a 12kg lamb was considered prime, where now it would be considered a store lamb to fatten to 18kg and beyond.

Another change in the industry was agents using cellphones, which

allowed calls to be made to clients and contractors at any time, rather than relying on a landline to make calls from home at night.

Another change was saleyards and agencies closing in Otago during his career.

Ranfurly once had five agencies and now had one.

"Stock firms were a big part of a town — that’s why I was against the big conglomerates."

In retirement, he planned to stay in Oamaru to remain close to his children and granddaughters in the South.

He decided to retire because "it’s a young man’s game".

He had made many friends in the job.

"There’s the camaraderie of the guys you work with, and the farmers become more than a client. You get close to a lot of the farmers — it’s a great industry to be in."