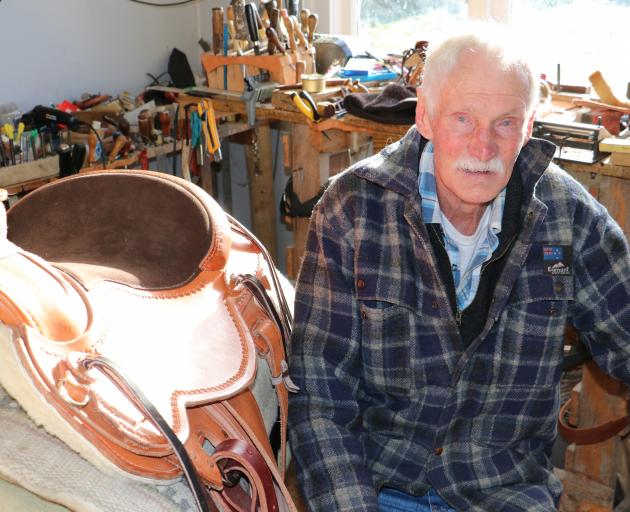 Freshford man Barry Cox sits in the shed at the back of his house which he calls the smallest saddlery shop in the world. PHOTOS: SANDY EGGLESTON
Barry (Salty) Cox’s interest in making leather goods has its origins in the days when he worked on Glenaray Station.

The 80-year-old Freshford man has worked with leather since as a young man he worked on the station as a musterer.

Mr Cox said 60 years ago much of the stock work on the station was done on horseback.

"There was always gear getting broken," Mr Cox said.

"You had to learn to fix it yourself.

"You couldn’t just walk out and push a button on the internet and buy them like you can now."

He said there were about 60 horses used on the station for mustering and carting fencing materials.

"We rode horses all day."

He was thankful to have grown up in an era when horses were so important.

"A lot of young guys never learn the skills of mustering and working on horseback with stock."

As well as fixing gear he also started making bridles and halters. 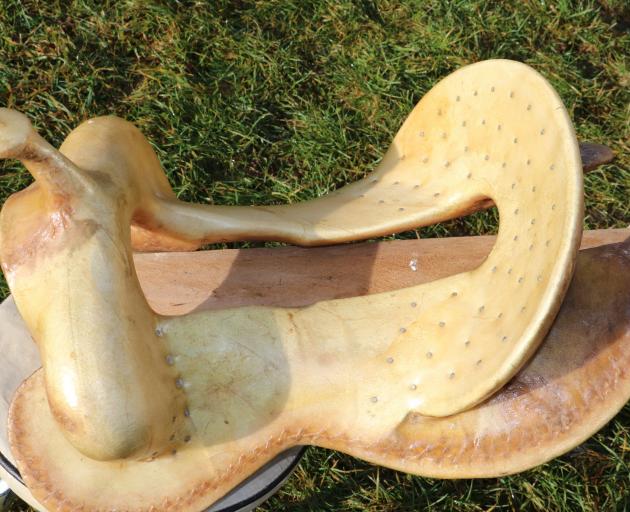 Barry Cox, of Freshford, made these Western saddles from scratch.

"He taught us all the basics of saddle-making but you can’t learn it in 10 days."

Mr Cox read books to increase his knowledge and started selling the saddles.

"It sort of skyrocketed from there.

"For a long time I was probably doing 15 saddles a year custom-made to order."

He made the saddles from scratch using a piece of shaped wood called a tree that he either made himself or bought.

A piece of green cow rawhide was then laced together around the tree.

"It’s like shearing — you never want to learn it."

The rawhide was wet when it was fitted on to the tree and it was important to have it at the right tension because as it dried out it shrank.

"If it’s too loose you get gaps.

"If you get too tight it will pull away."

After the rawhided tree dried it was then varnished to make it waterproof. 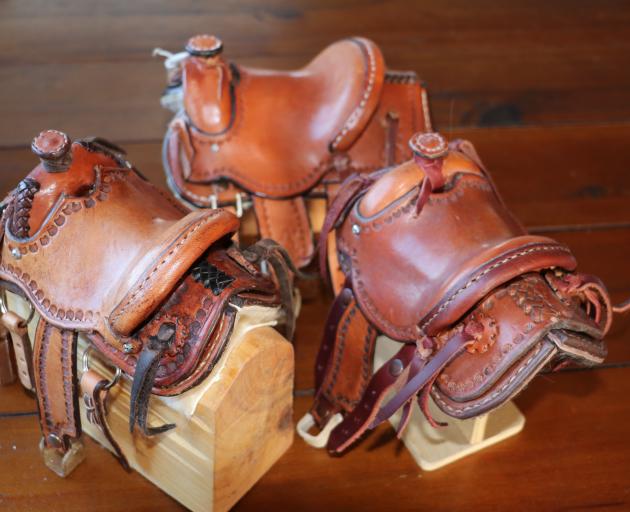 Saddle-shaped pieces of wood covered in rawhide and then varnished are the foundations for the saddles Barry Cox, of Waikaia, makes.

His saddle shop in a shed near the house was " the smallest in the world".

"I know if I lose something its just within an arm’s reach."

Even if he never found the item again he could take comfort from the fact it was not far away, he said.

Nowdays, his hands had been affected by arthritis and he made only about two saddles a year.

However, he now made miniature saddles which gave him an interest.

"I’m able to go out and do something and try and keep my hands working.

The miniature saddles were made in the same way to a full-sized saddle but the small ones were not covered in rawhide.

"I try to make them all a little bit different."

The miniatures had proved a popular seller and Mr Cox usually gave some away each year.

"I started making these little guys just for bit of fun and they got seen [and now] everyone wanted one."