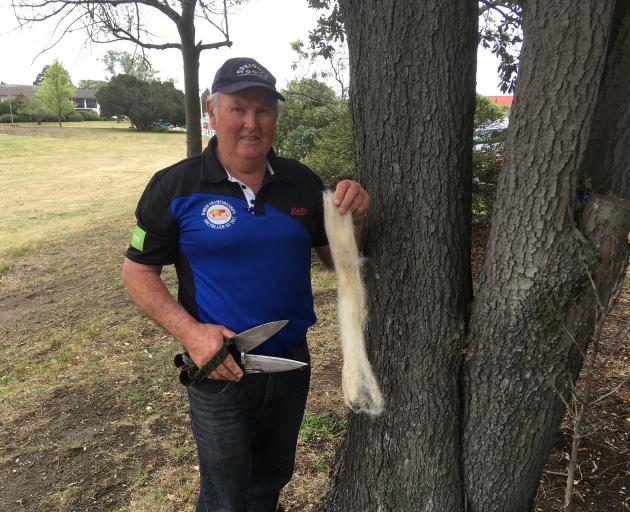 Peter Casserly shows off the world record fleece length which he shore from ‘‘Gizzy Shrek’’ at the Poverty Bay A&P Show. PHOTO: DAVID HILL
Peter Casserly has hung up his blades after adding his name to another world record.

The 72-year-old master blade shearer came out of retirement earlier this year to compete in the 60th Golden Shears in Masterton, before being invited to shear a special sheep at the Poverty Bay A&P Show last month for charity. And it was the charity aspect that appealed to him.

"I don’t think you ever retire, it’s like riding a bike. Somebody’s always got a pet to shear or a couple of sheep on their lifestyle block to be shorn. You just fade away in the finish," Mr Casserly said.

"At the end of the day the anxiety and the tension of it all is getting too much.

"And I had to knock off the booze for a week before going up to Gisborne and do some training."

Taking up shearing in the 1960s, Mr Casserly learned to blade shear working with the Karaitiana brothers from Tuahiwi, near Kaiapoi, who "were famous in shearing in the area".

"I used to do a lot of shearing in North Canterbury in my day and I was shearing all round Canterbury and Otago."

Competing in blade shearing, he won the golden blades at the Canterbury A&P Show in 1975 and 1976 and was world blade shearing champion in 1980 at Masterton.

In 1976, he broke the world blade shearing record, shearing 353 sheep in a nine-hour day at Rangiatea Station, near Mt Somers.

Moving to Omarama, he became the local publican for 13 years from 1992 and ran the Omarama Shears for several years, where he won the New Zealand merino shearing title.

Over the years, Mr Casserly has been invited to shear celebrity sheep including Shrek, Big Ben and Suzy.

Coming out of retirement, Mr Casserly placed third in the open blade shearing competition at this year’s Golden Shears.

"Gizzy Shrek" escaped from Wairakaia Station, near Gisborne, around five years ago and was found roaming in a neighbouring forestry block.

"They had seen it on several occasions, but it was too wily," Mr Casserly said.

"It had a long tail and no ear tag, but it was quite calm when I got to it."

While "Gizzy Shrek’s" fleece was not as heavy as some of the well-known sheep Mr Casserly has shorn over the years, the fleece length off the shoulder was measured at 58cm — 3cm longer than the previous world record set in Masterton in 2018.

Now retired on to a 4ha lifestyle block on the bank of Cam River, Tuahiwi, Mr Casserly has plenty of time for fishing for whitebait and trout.

As for his parting words, now that he has hung up his blades? "Success is not final. Failure is not final. It is the courage to carry on. You have to want it enough, just stay calm and carry on when the going gets tough. Keep going. You don’t give in."