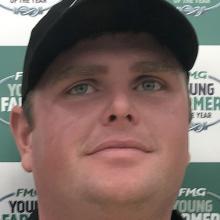 Luke Templeton
Southland herd-owning sharemilker Luke Templeton jokes he has had a couple of moments of weakness lately.

Mr Templeton (30) signed up for both the FMG Young Farmer of the Year and the Southland-Otago Dairy Industry Awards.

Next month, he will compete in the Otago-Southland regional final of the Young Farmer of the Year.

The practical and theoretical modules of the event will be held at the Tokomairiro A&P showgrounds in Milton on February 16, followed by an agri-knowledge quiz at the Milton Coronation Hall at night.

Mr Templeton rejoined Young Farmers when he had a career change and returned to the family farm near Riverton to go dairying. He had  been a member when he was a teenager.

He has a bachelor of mechanical engineering degree from Canterbury University and a postgraduate certificate in management from the University of Waikato.

Prior to returning to the farm in 2015, he spent four years working as a mechanical engineer for Carter Holt Harvey, in South Waikato.

His parents had encouraged him to pursue his engineering interest — "I like knowing how stuff works" — until  an opportunity  arose for him and his younger brother Peter to return to the farm. Peter had been dairying in the North Island and  brought his skills back to the farm, while Luke used his engineering skills to project-manage putting a second shed on the property.

Mr Templeton was excited about competing in his second regional final and hoped he would be "a bit wiser" from the mistakes he made last year. He was seventh in that event but had a great time. Due to his age, it would be his last chance to make it through to the grand final.

In October last year, his Thornbury club hosted the Southland district contest. He was convener for the event, meaning he  could not compete in it, so he competed in the Otago district event.

When it came to his desire to make it through to the contest’s grand final, Mr Templeton said he wanted the strongest person to get through, someone who had the best chance of winning the grand final.

Otago-Southland has a strong history in the event with the past two winners, Logan Wallace and Nigel Woodhead, hailing from the region.

While he would love to win the regional final, Mr Templeton said he knew the other contestants and it was going to be a tough field.

He will compete against Zac Thomas (24) who helps his grandfather run a 400ha farm at Charlton; Tom Blackmore (23), who is a block manager at Limehills Herefords at Roxburgh; James Robson (29), a shepherd on a 3500ha sheep and beef farm at Roxburgh; Matt McRae (30), a former rural banker who now runs a sheep and beef farm at Wyndham; Stag Valley stock manager Allen Gregory (25); Mount Linton Station stock manager Jacob Mackie (25) and Linton Palmer (30), from Dipton.

The Otago-Southland event is the first of seven regional finals being held across the country between February and April.

The regional winners will face off at the FMG Young Farmer of the Year Grand Final in Hawke’s Bay in July.

Mr Templeton quipped that a moment of weakness also occurred when it came to entering the dairy awards.

He had been approached a few times about entering the share farmer category, but this time around he did not really have an excuse not to.

He had also got to the stage where he was keen for more feedback on his operation and it would be good to be bench-marked  against others at the same stage.

Judging will begin next month and the regional awards dinner will be held at Richardson’s Transport World in Invercargill on March 27. The national finals will be held in Wellington in May.

The Templeton brothers were fifth-generation on the farm, on the coast just east of Riverton. It was a flax mill that brought the family there and until 1972, the property operated as a flax mill.The mill had since been turned into a museum.

Luke Templeton was one of the museum trustees and hosted tours, mostly in the summer months.

It was something  many people felt a real connection with. It was not a world-class museum, nor did it have professional displays, he said.

But there were stories to be told and "ridiculously old machinery" and things that people could touch and smell. Everything in there still operated, he said.It was also a nice diversion from farming and he enjoyed meeting visitors to the mill, even if it meant he was sometimes a little late for milking.

Recent visits included ones from a woman in her 80s, who pointed out she appeared in a photograph in the mill with his great-grandfather, and a group of French nationals who wanted to talk about their country’s flax industry.

The Aorangi regional final  of the FMG Young Farmer Contest will be held in Oamaru on February 23.