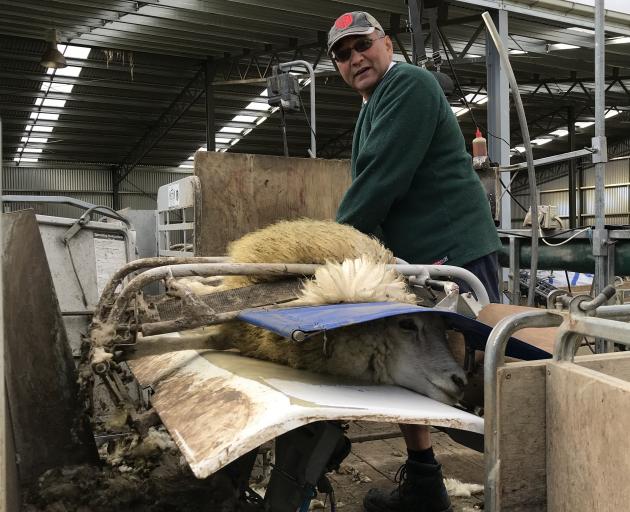 Bob Tamepo has worked his way through a career as a shearer, Corrections officer and now runs East Otago Farm Services with business partner Greg Paul. Photo: Alice Svott
From working the handpiece to walking the corridors ... Alice Scott talks to Bob Tamepo about his interesting and varied career path both in and out of the rural sector.

Banter. Bob Tamepo loves to give it, he loves to take it and it’s a quality he reckons has stood him in good stead as he has navigated a career as both a shearing contractor and a Corrections officer at the Otago Corrections Facility near Milton. 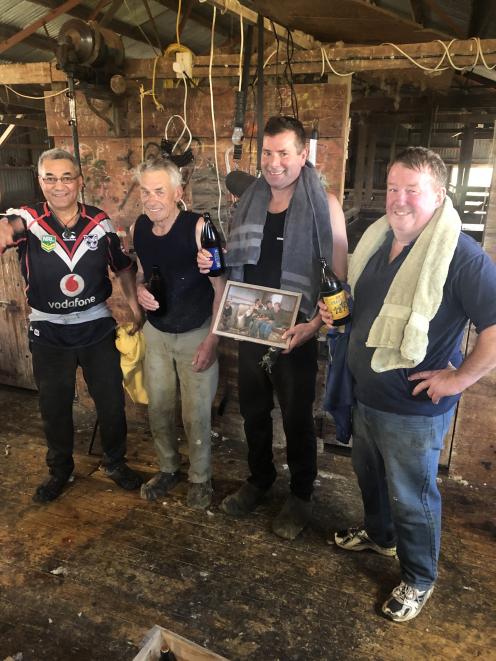 Bob says he has enjoyed working alongside a lot of great people in the East Otago area over the years. Bob is pictured on the left with Davie Warren, Geoff Snell and Wayne Hagan. Photo: Amanda Snell
Mr Tamepo got his first taste of shearing when he was 18 years old and working as a farmhand. Farm owner Neville Jones was a shearer/farmer and Mr Tamepo said he quickly learnt his way around a sheep as he and Mr Jones did all the shearing and crutching on the farm.

‘‘I finished with Nev in the end, and went full-time into shearing.’’

Initially, he worked with ‘‘the Deaker boys’’ on an open run and when they moved on, he carried on the run as a contractor.

The money was ‘‘all right’’ he said, and it was 20 ‘‘almighty years’’ working full-time in the industry.

Getting to know a large number of local men and women who came through his gang in the 1990s and early 2000s was a highlight for Mr Tamepo.

‘‘Lots of good young ladies helped me on the floor. I love to catch up with them all now and see where they have got to.’’

The work had Mr Tamepo and his gang all over Otago ‘‘we spent big hours in the van. But there was always good banter to be had,’’ he said.

and be more efficient with their use of time and travel.

‘‘I started out with a big brick like everyone. It was great because it meant if we were finishing early somewhere, I could call the next farmer on the list and be there after lunch rather than the next day.’’

After 15 years, family life made the contracting game difficult to manage.

‘‘At times we would have shearers staying with us. It just got too hard on the family, so I got out of it,’’ he said.

Next came a stint driving trucks at the Macraes gold mine, but he said the sedentary lifestyle didn’t agree with him.

‘‘I got too fat! I was eating like I was still shearing and I got very rotund, very quickly, so I thought ‘stuff that’ and I went back to shearing,’’ by which time his children were older and he took opportunities to work as a shearer overseas.

About 12 years ago when Mr Tamepo’s ears pricked up when he heard his sister-in-law was applying for a Corrections officer position at the Otago Corrections Facility.

The work was hugely satisfying.

‘‘I have always maintained you don’t demand a person’s respect, you have to earn it. That attitude seemed to help me get on OK with the guys in there.’’

His role was working outside the prison walls at the facility’s dairy farm.

‘‘The guys were picked up each day at 5am and we would milk 350 cows and I would teach level 2 NZQA through the Agriculture ITO. It was very satisfying to see some of the guys that came through develop a new passion and a number of them went on to work on farms.’’

About five years ago, Mr Tamepo stepped away from the Corrections role and back on to one with a handpiece, albeit this time in a role a little easier on the body.

‘‘A good mate, Greg Paul, and I joined forces, got geared up and started East Otago Farm Services.’’

The duo are kept busy working their way from farm to farm with their conveyor or crutching trailers.

‘‘The work is just getting busier and busier. Greg takes all the bookings, I just turn up in the morning with my smoko bag. It’s bloody good.

‘‘It’s great, I really enjoy working with all the local farmers around our area, we have a bit of a yakkity yak. It’s good for the soul.’’

Mr Tamepo was humbled to be asked by Otago Corrections to come back part-time when his contracting work was quiet. These days he is the groundsman inside and outside the Corrections facility, working with prisoners on lawns, gardens and other maintenance.