Sheep farming runs in the blood 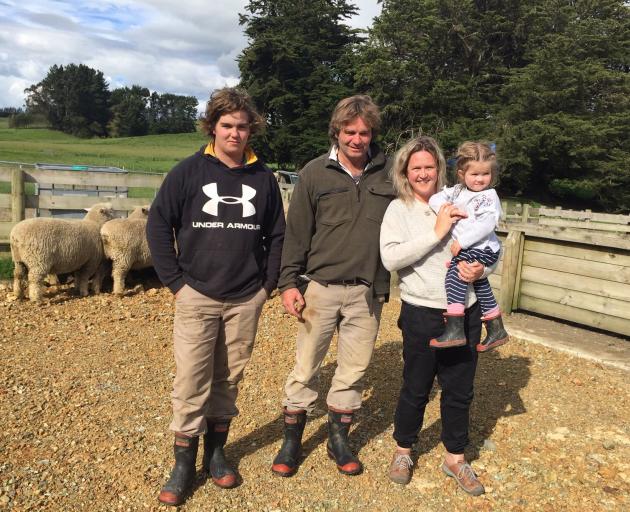 The Robertsons, of Merrydowns Romney and Southdown Stud near Tapanui, are (centre) Sally and Blair Robertson and two of their three children, Stella (3) and Jack (17). PHOTO: MARY-JO TOHILL
The Robertsons were not meant to continue sheep farming.

In 1998, the West Otago couple were advised to go dairying. It would be more lucrative. But it was the dual-purpose Romney all the way to the bank.

"We sacked the accountant and got a new one."

Borrowing to buy the family farm at Waikoikoi between Tapanui and Gore has meant huge debt servicing and it has been a tough grind for the past 20 years, but they are living their particular dream.

"It was bred into us, and I knew that's what I wanted to do," Mr Robertson said.

The Merrydowns Romney and Southdown Stud celebrated its 100th anniversary of breeding romneys this year.

When they took over the farm, the Robertsons had about 300 stud ewes. An injection of 450 Romney ewes from a Pahiatua breeder helped get them going. Now they have about 1200 stud ewes.

Having initially sold 50 rams a year, they now, on average, sell 500 Romney and Southdown rams, 243 of them offered for sale at their 12th annual December sale, which was held last week.

The top-priced $5000 Merryvale Romney ram, bought by Andy Denham, of Dunback, was bred by a fifth generation Robertson farmer, Blair and Sally’s son, 17-year-old Jack. Merryvale was the original name of the family stud.

"It was a good sound sale. There were plenty of rams to choose from, and rams there for every budget," Mr Robertson said.

In 1999, the Robertsons took another punt in re-establishing their Southdown stud that the family began in the 1960s.

Historically, the Southdown was one of the most important of the British breeds for fleece, meat and improvement of other breeds. They were popular in the 1950s but had gone out of fashion.

"When the Southdowns started, a lot of studs had come on the market. We bought them, and over five to six years built it up to 500 ewes."

It now has 800 ewes and the largest flock in New Zealand and consequently the world.

It had to be a "bloody good ram" before it was allowed on the place "and they're bloody hard to find", Mr Robertson said.

Hence the Southdown with the Aussie twang that they imported from Tasmania in January.

Mr Robertson said he had always had a clear idea of where the stud was heading, but it had taken a family effort to get there.

Mrs Robertson, a geography teacher at Menzies College in Wyndham, and off a Millers Flat sheep farm, met her husband at the former Raes Junction Hotel on the border between Otago and Southland, in 1997.

Funnily enough, he was just back from a ram sale, and was the sober driver, but was flying out to North America the next day to take up a six-month scholarship.

They kept in touch and 23 years and three children later, Mrs Robertson is still teaching, and they are still farming with Mr Robertson doing the bulk of the work himself with the help of Jack, who still has another year at school.

He has high hopes that their daughter Jess (18), with her strong marketing bent, will also get involved in the family farm.

"That would be my dream. A strong family business with everyone head of their own department, to keep it going as a family."

The current poor wool prices were not acting as a deterrent to breeding sheep with high quality fleece for the Robertsons.

"We’ve always bred for wool. Most people are trying to breed it off, but (from the animal welfare point of view) wool is what keeps the animal alive.

"We think we are right on the cusp of everything coming right with wool from the environmental point of view.

"There’re generations of Kiwis who know nothing about wool. We've got to be pushing its sustainability. It’s growing while you're sleeping."