Robyn Guyton set up the Longwood Loop to help revitalise local trade in her region. Photo: Matthew Rosenberg/LDR
Every Thursday, Robyn Guyton completes a 150km loop through rural Southland in her electric van, collecting and redistributing produce in hopes it will rebuild community.

People are lonely, she says. Could her food delivery service be the saviour she believes the dairy country needs?

In the backblocks of rural Southland, the roads abound with noisy utes and towering trucks - fleets of vehicles that reflect the intensified farming industry the region is built on.

But every Thursday afternoon, an electric van can be seen going against the grain, humming along in near silence.

Its driver, Robyn Guyton, is on a mission: to revitalise an old trading route and foster community in the process.

In the boot of her 2021 LDV eDeliver 3 are boxes of vegetables, fruit and meat - plus a chocolate and raspberry muffin for one lucky Nightcaps local.

"Now this is Fairfax," she says, pulling over where only a handful of houses line the side of the state highway.

"This used to be a hotel here, and a garage here, and a shop ... school ... hall. A thriving community. Now there’s nothing left, it’s all closed." 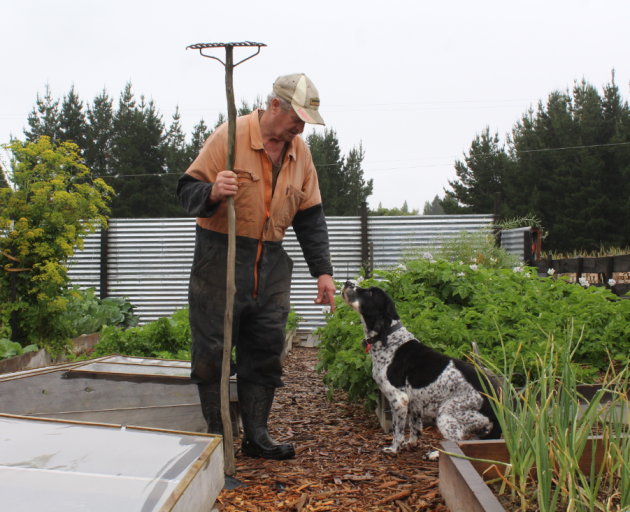 Dave Valli provides fresh produce for the Longwood Loop from his Ōtautau vegetable garden. Photo: Matthew Rosenberg/LDR
Guyton is lamenting what feels like an evacuation of small rural towns across the region. But armed with an electric vehicle and a food resilience programme, she is confident the areas can be revitalised.

Together with a group of volunteers, Guyton has set up The Longwood Loop - a mobile farmers’ market connecting emerging producers in Western Southland with their community.

Each Thursday, she drives an ever-changing 150km-220km path that starts and ends in Riverton, picking up and redistributing fresh produce along the way.

The initiative is a not-for-profit one, meaning producers retain 90% of their top line and buyers are not stung with delivery fees (the van only uses $10 worth of electricity for each circuit).

"It’s an online farmers market [where] the growers put up how much they’ve got, into the website," Guyton explains.

"Then on Monday, the shop’s open and for three days people can order, and the growers know exactly how many lettuces to pick. 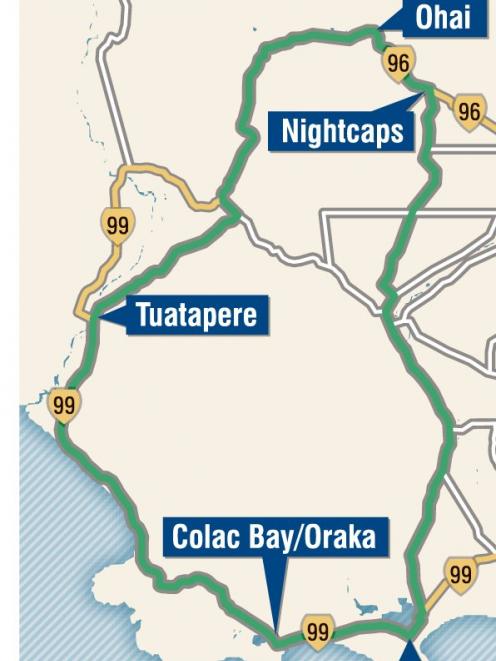 The shape of the loop varies from week to week depending on where orders are placed, but follows the same general path. Photo: ODT graphic

"It’s not like a normal farmers’ market where you might have 50 lettuces and you might sell 20. So there’s no food waste. It’s same-day [delivery] so there’s no overnight storage needed. And it’s carbon-free travel."

Buyers can order as little or as much as they want, and now 14 runs in, about 80 of the 200 registered customers have done just that.

At the first stop between Riverton and Ōtautau, she drops off an empty chilly bin from last week’s run and collects meat, hazelnuts and 10kg of blueberries. And so it goes.

But while Guyton says the programme is being well received in its pilot phase (it has only been running since August), speed bumps were aplenty during the three years it took to set it up.

The electric van completes the loop every Thursday. Photo: Matthew Rosenberg/LDR
Funding for the van was hard to come by, and the team ended up having to raise the last $15,000 of the $49,000 bill through a crowdfunding campaign.

Even after the vehicle was purchased, Guyton says, the project was put in jeopardy by the Southland District Council, which raised concerns growers should be registered with the Ministry for Primary Industries.

Guyton says she was going to do it anyway.

"I was prepared to get arrested for it," she recalls enthusiastically.

"Nobody’s going to die off food that’s picked up and dropped off the same afternoon." 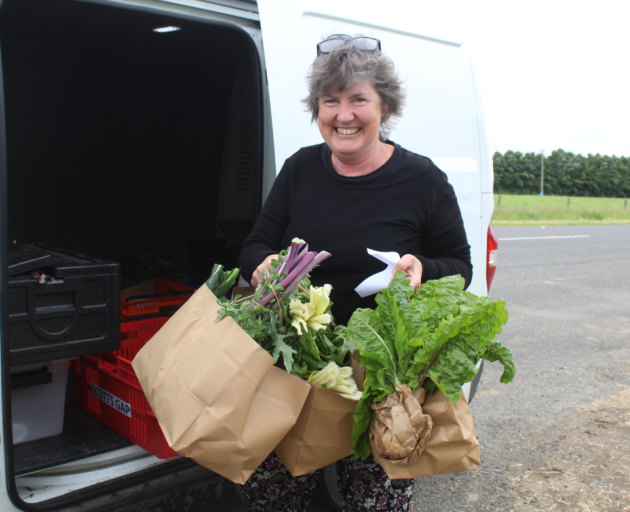 Robyn Guyton says the initiative is a good way to connect people who are living in isolation. Photo: Matthew Rosenberg/LDR
Many of the once-thriving towns on Guyton's path have now been deserted, with sprawling farms merging into each other in the vast and lonely landscape.

But it is not just the landscape that is lonely. Guyton fears many of the remaining residents are too.

Isolation is not hard to find in the region, and trips into the city normally start and end with a visit to the supermarket.

She recounts how one of the people who signed up to the programme told her how excited she was because she would finally have someone to talk to.

During a trial run in 2019, two deliveries that got mixed up in Tinkertown (between Ohai and Nightcaps) meant neighbours Brian and Byron finally met each other.

Guyton firmly believes that a large part of the social breakdown in rural areas is the result of globalisation and big industry taking over the area, pushing people into the cities.

She estimates that over the past 50 or so years, Southland's food supply has gone from 80% locally sourced to 80% global, supermarkets having gained a monopoly on distribution.

Furthermore, the population is ageing, and communities are becoming more fragmented, she says.

"I would like to have food security. I think that people are so trusting in the global food thing. It travels all over the world. Why are you getting your carrots from Australia when you can grow them here? It’s real dumb for the Earth."

"When we had the Christchurch earthquakes, and the Kaikoura one, and the Ashburton bridge got washed out, there’s only three days of food in the supermarkets. That’s it.

"If you buy off each other, you get fresh and you get cheaper, because it’s local."

Her approach seems to be striking a chord with the people she has met along the way.

When Vincent - a screenprinter in small town Nightcaps - receives his hand-delivered muffin from the Riverton baker, he is all smiles. 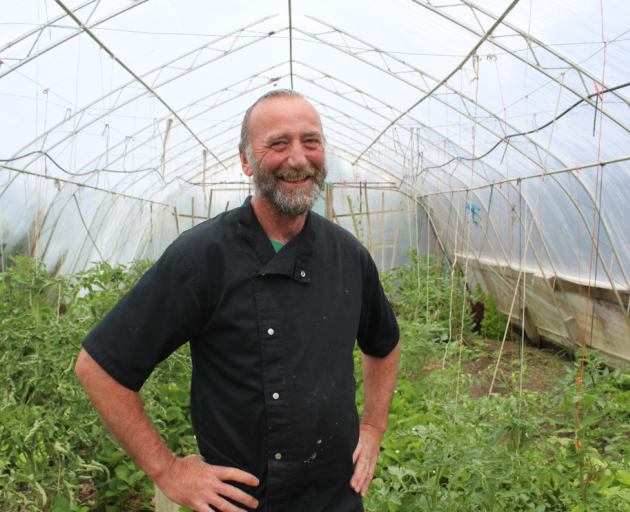 Craig Rutland lives in Tūātapere and provides fresh produce and jam for the loop. Photo: Matthew Rosenberg/LDR
In Tūātapere, Last Light Lodge owner Craig Rutland is a keen gardener who sells vegetables, fruit, jams and chutneys on the loop.

He hopes the initiative will encourage people to try their hand at creating and selling products.

"In terms of running a restaurant and accommodation place that grows your own food ... it gives us another avenue for sales," Rutland says.

"I think it’s a great catalyst to get other people in the community to start manufacturing themselves."

Colac Bay/Ōraka customer Lynley McKay is not worried in the slightest that she has had to wait a little longer than normal for her order when the electric bus finally pulls up in her patch (Guyton got held up backtracking to Nightcaps after forgetting to collect a large box of eggs).

McKay reluctantly poses for a photo next to Kate Mahoney, who has offered her place as a centralised collection point for the deliveries, and sings the programme’s praises. 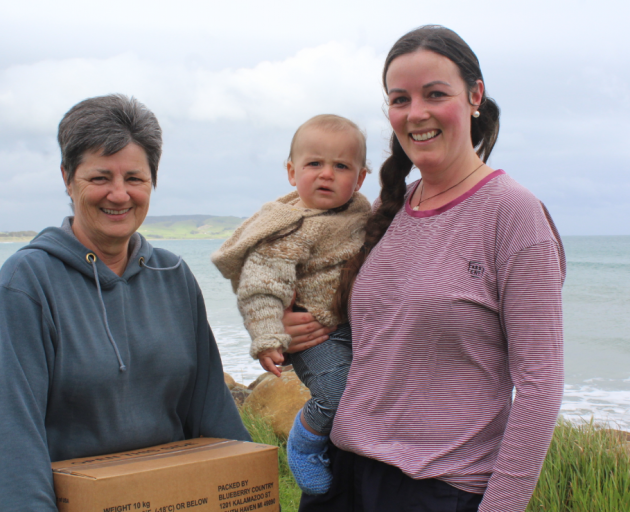 Lynley McKay with her delivery in Colac Bay/Ōraka, joined by Kate Mahoney and baby Gavin. Photo: Matthew Rosenberg/LDR
So what is next for it?

Guyton says interest continues to flood in from growers and consumers alike, and she has been contacted by someone in Northland who wants to set up a similar operation.

Her goal feels lofty: to have Southlanders growing 80% of their own food again in 10 years’ time.

But if anyone can pull it off, it is dogged Guyton.

"We hope that if we start trading again and buying off each other, some money will come back into these communities."