Still work to be done after diagnosis 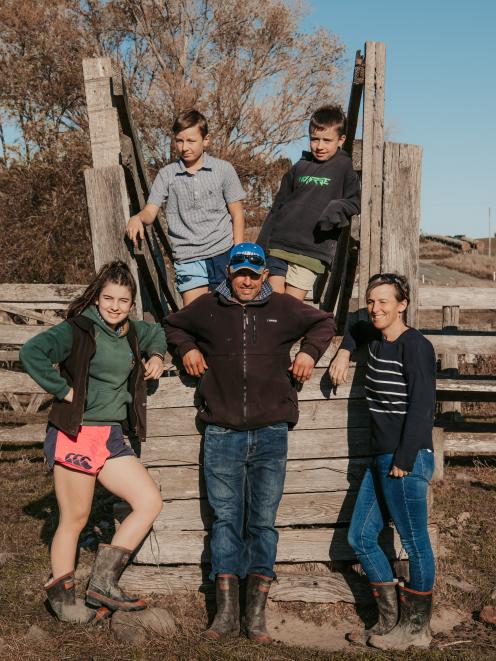 Back left, Lachie (11) and Bayden (10), front left, Jenna (13), Scott and Joy Clearwater have always got stuck into jobs on the farm together as a family. PHOTO: KERRI BACK PHOTOGRAPHY
Like many typical Otago blokes, Scott Clearwater (41) shrugged off his headaches, too busy on his Goodwood sheep and beef farm to see a doctor.

But as Covid-19 cases petered and the country went into Level 2, Mr Clearwater’s headaches got worse.

"He was writhing around on the floor one night and that’s when I said, ‘Enough’s enough, you need to get to a doctor’," his wife, Joy Clearwater, said.

Since that May 29 GP visit, the family’s life has been turned upside down.

"They found cancerous tumours in my lungs and on my brain. It’s also spread into my lymph nodes and it’s likely the mass they have found in my adrenal gland is also cancerous." Mr Clearwater hasn’t been given a positive prognosis and doctors have advised he should enjoy this time making memories with friends and family.

"But I am determined to prove them all wrong. I won’t give up that easily," he said.

Community is important to the family and Mr Clearwater has been a willing volunteer in a number of clubs and organisations for many years. "The support and love we have been shown by so many people has been mind-blowing. We can’t say ‘thank you’ enough.

"Every year I shear my own hoggets and sometimes my older ewe mob because I am too bloody tight to pay someone else to do it," he said, laughing.

"But this year I thought, ‘Ah bugger it, I will just bite the bullet and book it in’. But before I knew it a bunch of guys had rallied together and there they all were shearing my sheep." 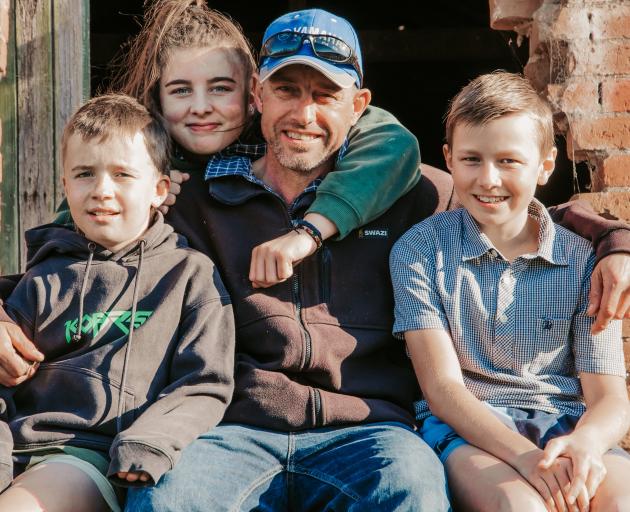 Scott Clearwater has been told he has stage 4 lung cancer but he isn't prepared to go down without a fight. ``I'm not going to sit and mope around on the couch, there's still work to be done.'' He is pictured with his children Bayden (10), Jenna (13) and Lachie (11). PHOTO: KERRI BACK PHOTOGRAPHY

Following brain surgery to remove some of a tumour, he feels "absolutely fine" but is unable to drive and cannot not be left alone for more than an hour. "But I’m not going to sit and mope around on the couch. There’s still work to be done." As well as the many locals who have helped, the couple’s niece, Megan Ollerenshaw (18), has been a "godsend", coming each day to be Mr Clearwater’s "right-hand man" and together they get the farm jobs done.

The couple’s children, Jenna, Lachie and Bayden, are motocross enthusiasts and the family travels the countryside competing. "The motocross community has been amazing. There have been two fundraisers.

Treatment for Mr Clearwater is pending. He awaits radiation and chemotherapy and is also opting for Keytruda, a type of immunotherapy to fight his lung cancer, neither publicly funded nor entirely covered by his medical insurance.

Shelley Cornish, a good friend of the Clearwaters, has set up a Givealittle page to help fund this treatment. "Those who know Scott, know that he would be the first person to give you the shirt off his back ... he’s just a bloody good bugger whose been dealt a really bad hand," she wrote on the page.