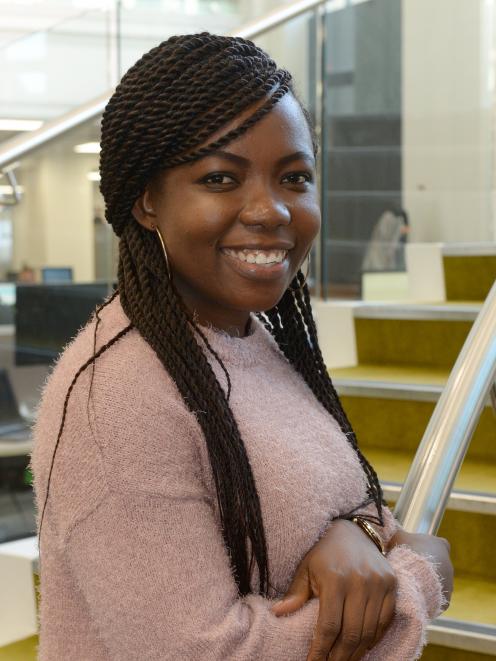 Ireti Balogun is spending a few months as an intern at AbacusBio in Dunedin. Photo: Linda Robertson
Farming in New Zealand and Nigeria are poles apart.

But AbacusBio intern Ireti Balogun is hoping to take home  what she has learned from her time in Otago and use it to help her country’s agricultural sector.

Ms Balogun (25) arrived in New Zealand at the beginning of last month  for an internship at the agribusiness consulting company.

The engaging young academic grew up in the city and was not from a farming background. As she was finishing secondary school, she was not sure what she was going to do and had considered becoming a medical doctor.

It was 2009 and Nigeria was going into recession because of the global oil crash. Oil had always been a major source of foreign exchange.

A mentor told her she should study agriculture, saying she would be among those at the forefront of change in the country.

Ms Balogun embarked on her studies in general agriculture, which included "bits of everything" from soil science to crop science.

She then won a scholarship to the United Kingdom to study for a masters degree in sustainable agriculture and food security.

It was very topical with the massive issue of how to produce food to feed the future population, and she found it very interesting.

Towards the end of her studies, Ms Balogun started thinking about how  she could apply her training back home in Nigeria.

It was not enough to have the "classroom knowledge"; she wanted to go out into the field and see things for herself.

Keen to gain more knowledge in another developed country, she started looking at both Australia and New Zealand.

A mentor in the UK told her about AbacusBio and, after a look at the company’s website, she was hooked.It was a business with links "in the middle of everything going on" — from farmers to policy makers. So she submitted her curriculum vitae and was accepted for an internship.

Shortly after arriving, consultant Peter Amer asked if she would be interested in doing a PhD and they were now looking at ideas of what she wanted to do.

It all fitted in with her end goal of taking knowledge back to her developing homecountry of Nigeria — or the likes of India or Ethiopia, she said.

Ms Balogun was relishing her time in the south and at AbacusBio, and said the team was "just great".

Her trip to the UK was the first time she had left Nigeria, and the weather she encountered was "something else", she  said with a laugh — it was like summer every day in Nigeria, she said.

New Zealand was a "beautiful" country and more peaceful than the UK, she said.

"There’s a calmness that comes with it."

She was excited about getting out on to farms and seeing what New Zealand farmers were doing.

In Nigeria, 80% of farmers were smallholders with less than 2ha, and there were very few large farms.

The fact they were small, subsistence farmers meant knowledge could not simply be transferred from New Zealand.

There needed to be an understanding of what it would take for them to accept change, she said.

When it came to the likes of considering greenhouse gases, Nigerian farmers did not even know what that meant.

Typically, they were mixed farms with some crop — Nigerian farmers grew a lot of maize — and poultry.

While there was a ministry for agriculture, Nigeria did not have industry organisations like Beef + Lamb New Zealand or DairyNZ so most farmers just did things on their own, Ms Balogun said.

Soil was very fertile but there was a lot of depleted land as a result of unsustainable farming practices.

Ms Balogun wanted to find her "own niche" — one thing  she could achieve.It was not about doing everything, but coming up with one solution that would "really change things" in the agricultural sector.

Nigeria now had an understanding of agriculture’s importance. There were opportunities to study agriculture in the country but there were also a lot of infrastructure issues.

Ms Balogun was passionate about the role of women, and said they were a very important group in agriculture but they were invisible in Nigeria’s agriculture sector.

Women were involved in primary production but there were limitations of cultural and religious barriers.

There were few women involved near the top of the food chain and that "invisibility" was very common in African and Asian countries, but women should be part of decision making and policy making processes, she said.