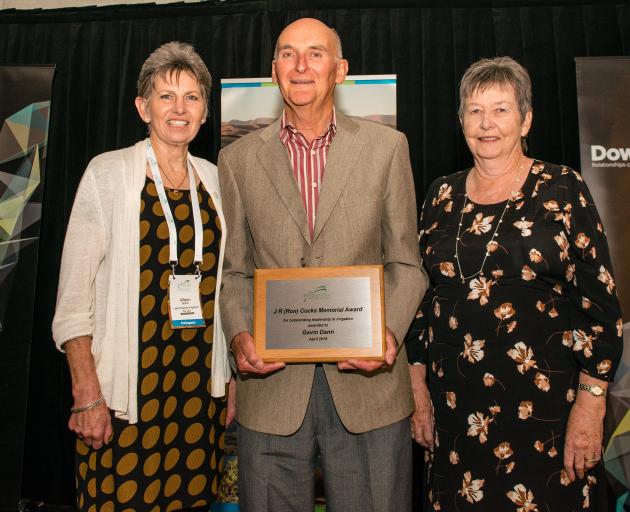 Alexandra man Gavin Dann celebrates his Irrigation New Zealand 2018 Ron Cocks Award with his wife Cathy Dann (right) and Allison Sutton. All three have supported the Last Chance Irrigation Company’s work for decades. Photo: Supplied
An Alexandra man has received national recognition for his services to irrigation in Central Otago, but has paid tribute to the work of "two extraordinary women" as well.

Gavin Dann was one of two recipients of a 2018 Ron Cocks Award from Irrigation New Zealand during its conference in Alexandra recently, for his leadership of the Last Chance Irrigation Company (LCIC) and his work to establish a community drinking water supply.

Mr Dann had been the "driving force" behind a number of initiatives to improve the Last Chance company’s operations, supporting the scheme for more than 40 years, Irrigation New Zealand chairwoman Nicky Hyslop said.

He was a "valuable member" of the Last Chance irrigation group which negotiated with the Crown for the purchase and settlement of the scheme, and was chairman from 2007 until his retirement from the board in 2011, Ms Hyslop said.

"He has demonstrated a high degree of innovation, perseverance and intelligence in resolving complex issues, and the company and local community has benefited from his strong interpersonal skills as he seeks to find solutions which meet everyone’s needs," Ms Hyslop said.

The Old Man Range, above Alexandra, snow from which provides irrigation water for the Last Chance Irrigation Company. Photo: Supplied
But Mr Dann paid tribute to "two extraordinary women" who had also contributed greatly to the Last Chance scheme.

His wife, Cathy Dann, was the first secretary of the LCIC, as well as the inaugural secretary of the Earnscleugh Irrigation Company, and had also served as the secretary and financial officer of the Last Chance Community Drinking Water Scheme for the past 25 years.

The LCIC uses snowmelt from the Old Man Range for irrigation, delivering water to farms north of the range through a water race network originally built in gold-mining days and through natural creeks.

Two concrete arch dams — Conroys Dam and Butchers Dam — were built during the depression to store water for the scheme.

An idea of Mr Dann’s was then to retake run-off flood irrigation water from Butchers Dam irrigators and pipe it through a hill and across a valley to the lower Conroys catchment to supplement the supply.

He successfully negotiated to have the Crown fund this "link race" pipe as part of the Last Chance settlement, and also promoted and arranged the construction of a storage dam to feed water to this Link Race.

He is still the manager of the Last Chance Community Drinking Water Scheme.

He said he was "humbled" and "surprised" by the Irrigation New Zealand award, and acknowledged the role of other Last Chance directors, saying the scheme had been a "team effort".

It had been "exciting" developing the Last Chance scheme, and it had a solid future, Mr Dann said.