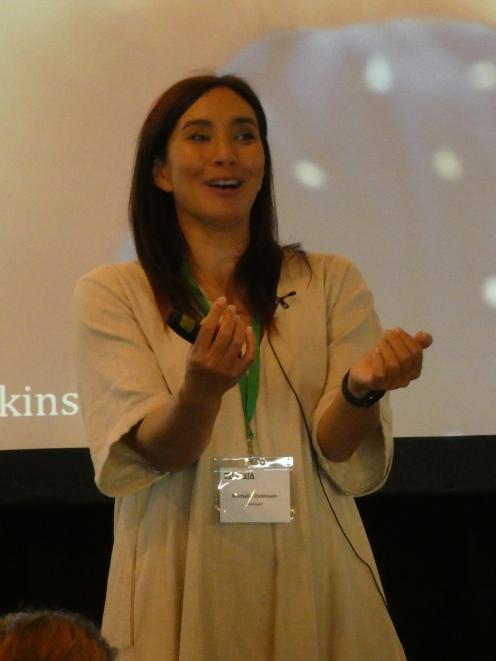 Dr Michelle Dickinson’s Nanogirl mission is to get more girls into a science career and to stop doubting themselves. PHOTO: TIM CRONSHAW
The science educator who invented her alter-ego, Nanogirl, as a way to overcome her nerves says farming women should embrace their inner awesomeness.

Dr Michelle Dickinson, an engineer by training with three degrees, revealed to more than 100 arable farming women attending the Women in Seed Forum in Christchurch that she was painfully shy. She used to retch before public speaking and her inner voice always knocked her confidence.

That has not stopped her from encouraging young people in her Nanogirl programme to embrace their STEM superpowers: science, technology, engineering and mathematics skills.

Or from running a YouTube channel, working with Icebreaker to produce a line of dresses featuring science and technology and writing a book on science experiments that can be done in the kitchen.

Dr Dickinson was teaching engineering at a university and observed a male colleague her own age rise up the ladder faster than she did.

"By the end of five years he was 10 pay grades above me. I thought I need to learn from this person and what’s he doing different from me. I took him out to coffee and ... I said, that voice inside your head, and he stopped me and he said ‘the one inside that says I’m awesome’. I realised we have very different voices."

She said her lightbulb moment was that there was a different brain field and women should learn to believe in themselves and shake off their imposter syndrome.

During the forum, to demonstrate the wonders of science she had the audience try to put a wooden skewer through a balloon without popping it.

Several figured it out — but no-one guessed correctly what was in a bag of "non-toxic" white powder and only one person asked if it was edible.

She said this showed no-one thought of asking questions to narrow the options and work out that it was a super absorbent polymer for incontinence pads.

A 2 to 4-year-old asked 107 questions an hour, yet by their first year at primary school they only asked 2.5 questions.

This only got worse at adult age and was preventing disruption and positive change, she said.

Nanogirl had one mission — to inspire people to have a positive relationship with STEM, Dr Dickinson said.

"There was nobody here born on this planet who didn’t start with a positive relationship with science. You can put a 3-year-old out in the garden and you know they will pick up a rock, pick up a worm and be obsessed. So what happens is that the system happens — the word science becomes a silo thing, a subject at school consumed by periodic tables ... and becomes more about finite data than discovery."

The Nanogirl programmes worked with children aged 5 to 12 as research shows girls, especially, made up their minds about science at about 12.

When they started, six years ago, 85% of primary schools did not teach science and now there were about 400 Nanogirl schools.

When a survey of 1000 children, split evenly between boys and girls, had them draw a scientist, they almost all came up with a male scientist.

This stereotype had to be changed from the ground up, she said.

"And I can blame TV, right? Name me one amazing female scientist or engineer who has a current TV show around the world. If you asked anyone in public they would probably name these cool men [Sir David Attenborough, Mythbusters duo Adam Savage and Jamie Hyneman] but they aren’t representing the diversity."

Dr Dickinson said she had written scripts for Mythbusters and they were lovely hosts, but were special effects experts without scientific knowledge.

"I’ve been able to work in fun places all around the world, but it’s also been challenging for me as a woman. I’ve been the only woman on all of the teams — with Apple, Intel, Microsoft, IBM — and I was the only female engineer."

She said many engineers came from privileged backgrounds, having the same thought process.

This could be seen in innovations such as smart phones designed for men with large hands.

She once asked the creators of the Lime scooter why there was not a hook for female riders to hang their hand bag on.

"I can give you many examples of things invented by a certain demographic that doesn’t represent us and I’m not talking gender, I’m talking socioeconomic, ethnicity. One of my missions is, if we want to disrupt and innovate we have to get people to think differently."