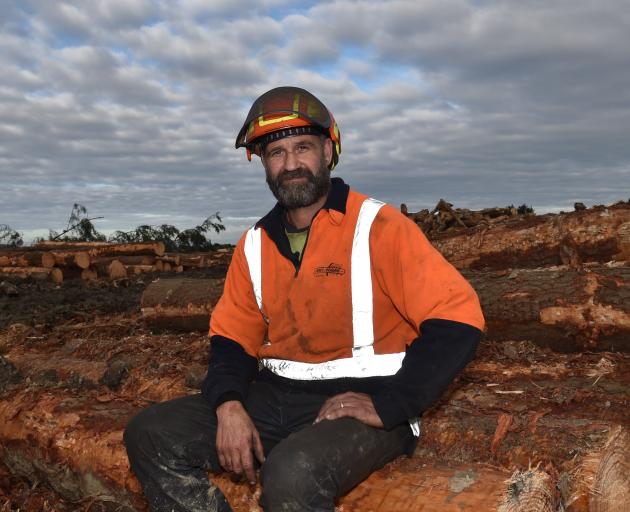 Steve Jones doesn’t say it, but it’s obvious he comes from the school of hard knocks.

Born and raised on his parents’ farm on Saddle Hill above the Taieri Plain, Mr Jones learned all about work ethic alongside his father and found himself at weekends and during school holidays on the end of a hand-piece.

“I loved the physical nature of shearing. When I finished school, I got offered a full-time job shearing.”

But after 10 years, the punishing nature of the work on his back had become too much and he made a career change.

“I got a job breaking out for a logging crew. Believe it or not, it was slightly easier on the body than shearing,” he said, laughing.

In 2012 the opportunity came up to buy the business. “I had been saving all my pennies and we had a bit of equity behind us with a newly built home and a few acres which I was able to borrow against.”

A hauler, three diggers and the staff that came with the business became Steve Jones Logging. “We arrived on the skid site the next day, turned the keys and carried on.”

Logging is one the country’s riskiest occupations and health and safety has become a huge factor in the business.

Contracting mostly to PF Olsen, Mr Jones said the majority of his work was on smaller woodlots on privately owned farmland. “PF Olsen has been great. The safety of our crew comes first which is really reassuring.”

PF Olsen has its own health and safety compliance requirements which went over and above that of the industry standard “which took a bit to get my head around”.

He has also opted in to an industry-wide health and safety certification called Safetree.

“There’s no financial gain or incentive to do it but it gives the landowner peace of mind that the loggers on the property are certified to a high level.

"When I drive past logging crews with no signage or such-like, I just wonder how on earth they are getting away with it.” he said.

Mr Jones was no stranger to the dangers of logging. He has had multiple broken bones and a few close calls.

“Back in the day we would just laugh it off and carry on. Nowadays it’s just such a different culture and near misses are taken pretty seriously.”

Both his sons showed a keen interest in logging from a young age and 23-year-old Tyler, his youngest son, works for him.

Eldest son Kori became a tetraplegic when he and the crew were in a serious vehicle crash leaving the log site nearly nine years ago.

“We were all very lucky to be alive. He has a young daughter now and an incredibly supportive partner. His positive mindset has been pretty inspirational, really.”

Contracting to private woodlots could be fickle and the business was at the mercy of log values.

"I can understand that; a lot of the forestry [blocks] we harvest are investment blocks that have been maturing for more than 25 years. The owner is quite prepared to sit on it and wait a little longer until the price is better.”

The realities of that could lead to “the odd sleepless night” and wondering how to pay the interest bill.