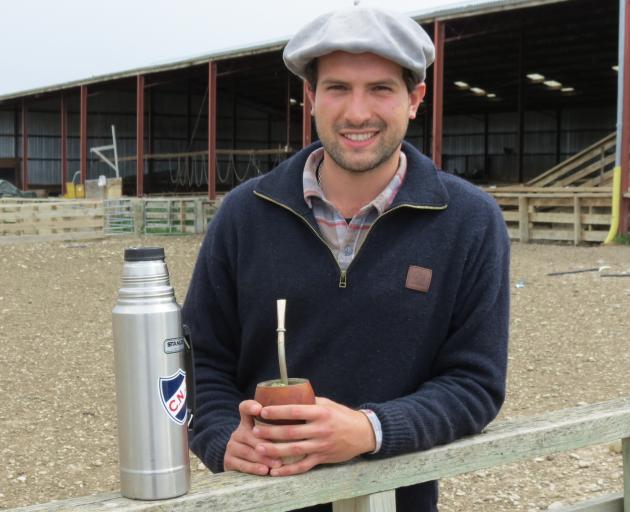 Young Uruguayan agriculture enthusiast Ricardo Barcia is spending time in Otago learning the wool industry. He is keen to introduce some of New Zealand's practices to woolsheds in his own country. Photos: Yvonne O'Hara
Ricardo Barcia is passionate about wool and the wool industry, and wants to learn more about fleece preparation before he returns home to Uruguay in March.

Mr Barcia (24) is from Salto, in Uruguay, and arrived in New Zealand in August to work on Andrew and Tracy Paterson’s property, Matakanui Station, near Omakau.

He had also spent time in several Otago woolsheds and was interested to see how woolhandlers and wool classers prepared the fleeces before they went into into fadges, something that did not happen at home.

Mr Barcia said he would like to introduce the practices to woolsheds in Uruguay as he could see significant benefits and added value for farmers there. 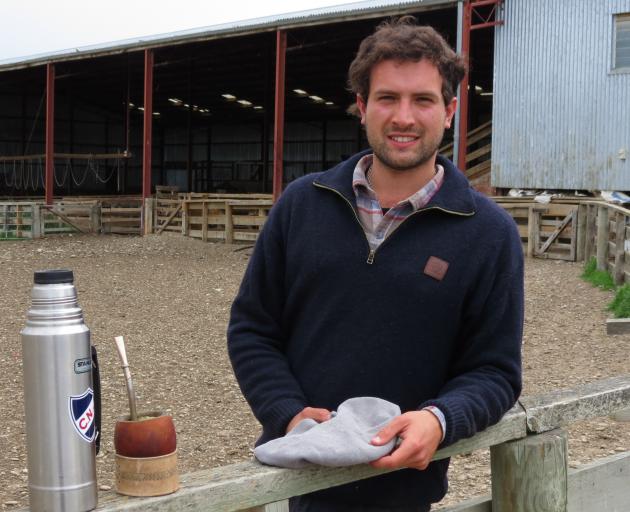 Ricardo Barcia has been working at Matakanui Station since August and is keen to find out more about wool classing and wool preparation.
He said the wool industry in Uruguay had a lot of potential to grow.

‘‘However, it would have to change some things to get the best quality [of wool], including fleece preparation.’’

In addition, although women were part of the shearing teams in New Zealand woolsheds, they did not work in Uruguay woolsheds — and they could be an invaluable asset.

Mr Barcia comes from a farming background. His family has a 1450ha farm in Uruguay and runs about 3000 merino sheep and about 1000 Hereford cattle.

‘‘I started liking farming when I was about 13, but before that I was not interested.’’

A month later, he met Mr and Mrs Paterson at a big agricultural show in Uruguay and the couple had offered him a job.

After a year working in Uruguay, he arrived in New Zealand in August bringing plenty of enthusiasm for learning, as well as his ‘‘yerba mate’’ — a popular stimulant drink in South America similar to tea — and bombilla, a type of drinking straw and tea strainer.

‘‘As I was coming over here, I decided not to look for full-time job, but just do part-time work on the family farm and help my uncle,’’ he said.

‘‘This is my first real farm job.

‘‘I am a farm worker here, doing many different activities.

‘‘As soon as I arrived at Matakanui, I did drenching and vaccinations, as well as learning to drive on the left side of the road, drafting, fencing and feeding out, helping the shepherd, and weighing and drafting lambs.’’

The Patersons took him to the recent New Zealand Agricultural Show in Christchurch, at which the station won several awards for its fleeces.

Although he had been learning English since he was 5, he found it difficult to understand some of the New Zealand pronunciations, but was working to improve.

He also found the Central Otago landscape very different from his home, which tended to be much flatter.

‘‘Central Otago has more and higher hills and mountains,’’ he said.

‘‘The people here are amazing, really kind and helpful.’’

In addition, he met representatives from Italian company Reda, which buys merino wool from some of the region’s farmers.

The Sanders family won Reda’s Marque of Excellence for supplier of the year earlier this month.

‘‘They [Reda] are really strict about what they look for,’’ Mr Barcia said.

The wool staple has to be between 70mm and 90mm, has to have a small crimp, be 16 to 19 microns and have a fibre strength of 40 newtons to be suitable for the high-quality fabric it makes.

‘‘I also took part in the merino judging competition at Armidale with Simon Paterson a couple of weeks ago.’’

Mr Barcia is keen to gain more experience in the wool or cattle industry in New Zealand before he goes home in March and is looking for other opportunities, so would be keen to hear from anyone who might have a position.

‘‘I have an open mind to receive new things and learn new things,’’he said.