From vodka to high country 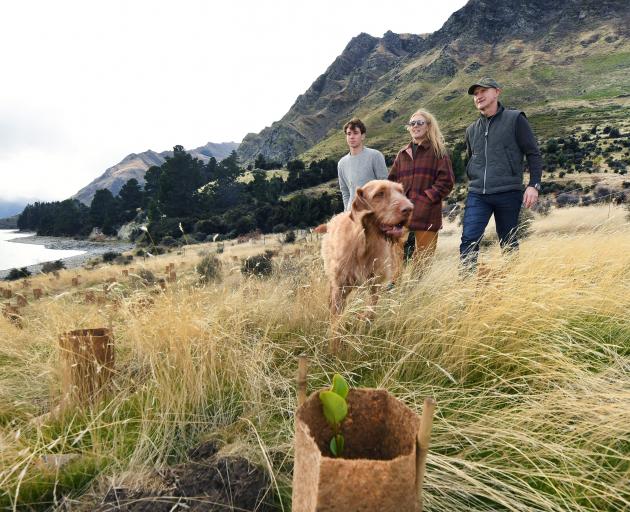 Finn, Justine and Geoff Ross, with Sika the dog, check native plantings on Lake Hawea Station. PHOTO: STEPHEN JAQUIERY
Geoff and Justine Ross are best known as entrepreneurs and founders of the hugely successful 42 Below vodka company. But they have traded city life for a rural adventure at Lake Hawea Station where they are using the skills gained in business to apply them to the rural sector. They speak to agribusiness reporter Sally Rae.

Geoff Ross was always going to be a farmer.

But the career path he took to farm ownership was not necessarily what he envisaged growing up on a deer and dairy farm in the North Island.

His wife Justine recalls how she wanted to marry a farmer; in fact, she thought she was marrying a farmer. It did not quite pan out like that.

"My goodness, we went on a big adventure," she said with a wide smile.

That included brewing vodka in their Wellington garage and co-founding 42 Below, which was later sold to liquor giant Bacardi for $138 million in 2006.

The inspirational story of the audacious and brave little Kiwi startup which built a brand that made the world sit up and take notice is chronicled in the couple's book Every Bastard Says No. 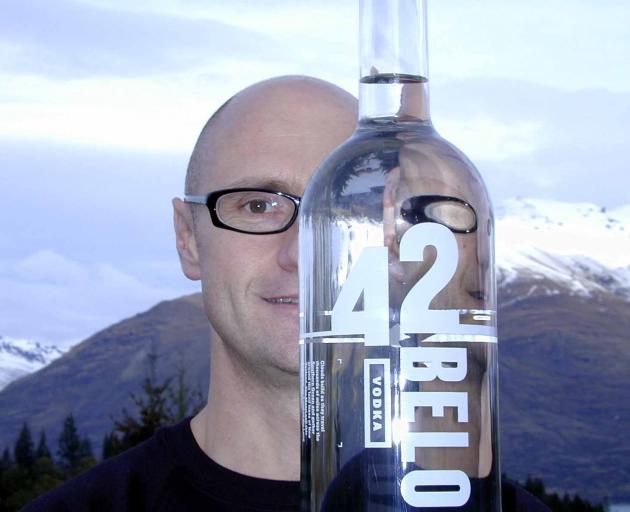 But the plan was always to come back to farming and that dream was finally realised when the Ross family purchased Lake Hawea Station about 18 months ago.

They leased the 6500ha property back initially before taking over the farming of the property in April, aided by the likes of general manager David O'Sullivan and farm manager Jack Mansfield.

"This is home," Mrs Ross explained over morning tea in the station's homestead this week.

Warm and engaging, the couple acknowledged the likely cynicism around what they were up to; that people knew who they were "in the middle" but not the past context of their lives and their rural pedigree.

During the early stages of their ownership, people would ask anyone at the station if they were "going to build a Hilton here".

A native falcon swoops past as the Ross family express their passion about flora and fauna. PHOTO: STEPHEN JAQUIERY
It was nice to have them understand their story, what their plans were and try to get them involved, Mrs Ross said.

And that vision was a big one; protection of the environment had been a long-standing passion for the couple.

They realised they had an opportunity to take both that and their knowledge of branding - utilising the skills gained from their years in business - and apply it to the rural sector.

"We'd like to be a change-maker in the sector, that's the dream," Mrs Ross said.

At Lake Hawea Station, they wanted to "almost set an example" of how farming and the environment could work together.

That dream was shared by the couple's two children - Finn (20), a third-year student at Canterbury University studying ecology and economics, and Gabe (16), a pupil at John McGlashan College in Dunedin.

As a family, that had been "really cool".

Both young men loved the outdoors and had been hunting with their father since they were "wee nippers".

Gabe had a particular passion for photography and was regularly up at dawn at the station to try to capture the sunrises.

Geoff Ross was born and raised on a north Waikato farm where his father was one of the farmed deer industry's pioneers.

After a stint milking cows, he realised dairy was not for him, so he headed to Lincoln seeking some other form of agriculture.

As well as studying agriculture, he did some marketing papers. Near the end of his tertiary studies - he graduated with a bachelor of commerce (agriculture) - he went on a field trip to an advertising agency and it was to be a pivotal moment.

Farming was going through a bit of a trough and he decided that it was something that he could always go back to. There seemed better opportunities in the city and he got into advertising.

He met his future wife when the pair were in their teens - her parents also came off farms. She trained as a teacher and speech language therapist and thought she would work at the local school while he farmed.

An adventure in business followed but eventually, as their values were more aligned to "a life on the land", and as they started seeing changes in the environment, it got them thinking.

"I'll never forget our youngest son looking out the window [in Auckland] one day and saying, `I don't understand why there's a house right there' ... and it never felt comfortable for either of us," Mrs Ross said.

That interest in the environment was driven from a personal interest but also, after selling vodka on the streets of London, the first comments they heard were about New Zealand's beautiful, pristine environment.

It made sense that a "beautiful pristine" liquor came from that same place. Essentially, they got a premium on "selling New Zealand" and experienced first-hand what the country's environmental credentials could deliver, as well as dollars, Mr Ross said.

When it came to searching for a farm, Mr Ross liked western Waikato, from Raglan to Port Waikato.

But the family had also holidayed and hunted in the Upper Clutha area and the more time they spent in the mountains down there, the greater the realisation of the pull of the area.

It was the opportunity that attracted them to Lake Hawea Station, including the potential to develop a further tract of flat land for farming.

"We wanted a true alpine place. It's not a pretend farm, it's a real farm with mountains," Mr Ross said.

Originally part of the vast Morven Hills, Lake Hawea Station used to be the "ram paddock" for that property.

The station was running about 7000 sheep but they believed they could lift those numbers to about 10,000.

Mr Ross believed agricultural production could be lifted without being at the expense of the environment.

They were developing land on the lakefront, putting new pastures in, and were also looking at putting in a second pivot irrigator.

Sheep were something that sat "more comfortably" for them, rather than cattle, so they were only running a few cattle, Mrs Ross said.

They saw increasing opportunities for the agricultural sector to move up the value chain and get closer to consumers.

They were recently in the United States and London, taking a look at some of the thought-leaders in that area.

They went to some "pretty cool" startups that were using merino wool. What those brands were looking for was to partner with like-minded producers so there was a story behind the story, Mrs Ross said.

Those brands wanted to go back to the farm, almost to the sheep. That traceability was going to be a big part of the future, Mr Ross added.

When it came to their vision for the property, Mr and Mrs Ross defer to Finn who hopes to go to Monash University in Melbourne next year to study corporate sustainability.

For him, the family's acquisition was a "pretty cool opportunity" to get hands-on with conservation.

He believed there was somewhat of a perception in New Zealand around farming and the environment and that "we can fence off waterways and do a bit of planting - that'll do".

While those were both great initiatives, there was also so much more that could be done and the Ross family wanted to be "real environmental leaders".