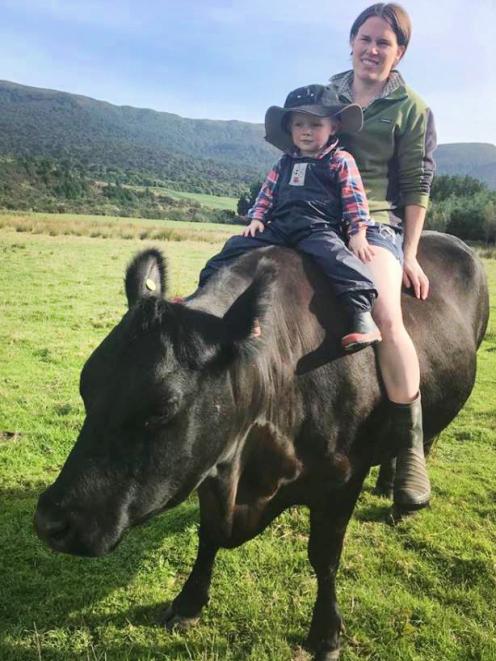 Mrs Sutherland (31), a member of the Clinton club, was recognised for her service at the organisation's recent national awards evening in Invercargill.

It was a stellar week for the Otago-Southland region; as well as Mrs Sutherland's success, Brooke Flett won the stock judging and Otago-Southland won best region in New Zealand.

Topping it off was Mrs Sutherland's fellow Clinton club member Logan Wallace winning the Young Farmer of the Year title.

Mrs Sutherland's award - which she shared with Canterbury's Sarah Heddell - honoured their service to Young Farmers in their respective regions. The pair received a standing ovation when they were presented with the award.

Mrs Sutherland said she first became involved with the Clinton club about 12 years ago, seeing it as something social she could do.

There would have been about 12-15 members at that time and that had now grown to about 20.

Young Farmers clubs had experienced a resurgence throughout the region; there were about five clubs in Otago-Southland back then, but now there were 13 and, while membership probably previously numbered 40-50, it was now in the hundreds, she said.

That went into funding the club's activities and a scholarship to further higher learning and leadership for a deserving person in the Clutha district.

She was also involved with the Otago-Southland region, including as treasurer for three years and convening a regional final for the Young Farmer of the Year.

She was also on the organising committee for this year's FMG Young Farmer of the Year. That was an "awesome" committee to be part of and everything ran according to plan for the 50th anniversary of the event, Mrs Sutherland said.

As well as the friendships forged and social aspect, being involved in Young Farmers had given her a lot more confidence.

"It's challenged me, pushed me out of my comfort zone."

She also met her husband Michael at Young Farmers and the couple now manage Mr Sutherland's parents' sheep and beef farm. They have two children, Henry (3) and Thomas (19 months).

Before that, Mrs Sutherland worked as a shepherd on Landcorp properties at Waitepeka and Waipori.

Reaching the age limit at Young Farmers, she was not being lost to the organisation as she was becoming an advisory member for the Clinton club, meaning her involvement would continue, she said.