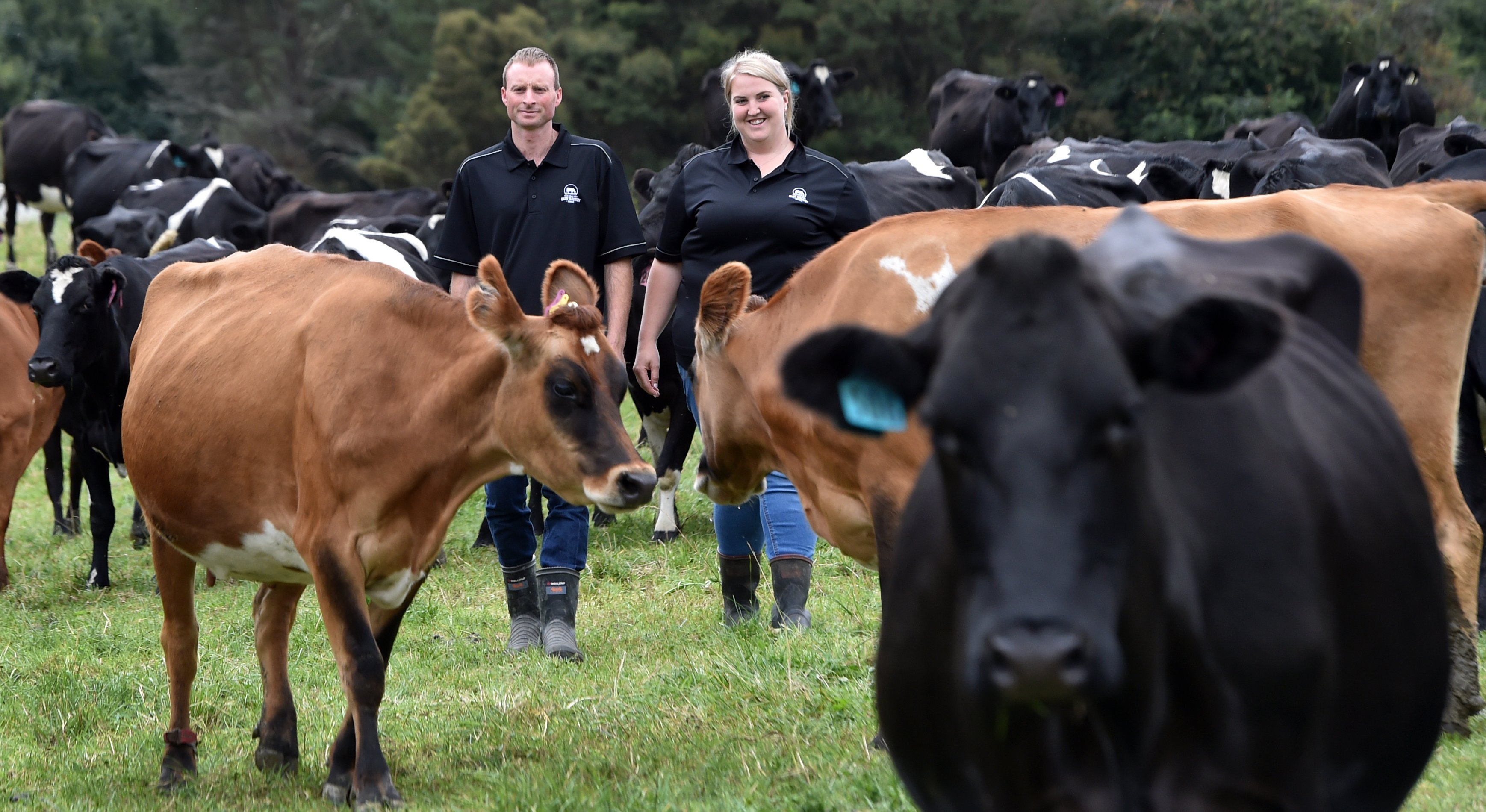 She was from a sheep and beef farm in Scotland, he was a qualified carpenter from Balclutha.

Scott and Ann Henderson might not have grown up in the dairy farming industry, but the pair have made their mark on the sector, winning the 2021 Southland-Otago Dairy Industry Awards Share Farmer of the Year title.

Industry recognition was not new for Mrs Henderson, who won the dairy manager of the year in the Southland-Otago awards in 2017, having finished runner-up the year before.

As they reflected on their most recent success at their South Otago home - the couple were still reeling from the announcement at a function in Invercargill last weekend, admitting it had not yet sunk in - Mr Henderson said it was "pretty cool" to look back at their journey from when Mrs Henderson won the manager title to where they were now.

The couple are 25% lower-order sharemilkers on a Whitestone Trust property, near Milton, milking 850 cows and supplying Danone, where their milk was used for infant formula.

The farm was converted to dairy 23 years ago and has picturesque views of the surrounding South Otago countryside.

"We love the land and we love what we do and we love to look after the land. Everything we do is to protect the land," Mr Henderson said.

Mrs Henderson grew up on a sheep and beef farm near Edinburgh. She always preferred cows to sheep, and a module on dairy farming during animal care studies cemented her interest in the sector.

She was milking three times a day in Scotland before coming to New Zealand in 2012, aged 21, on a two-year working holiday visa. Returning home for her brother’s 21st birthday, she decided New Zealand was "home", given it had many more opportunities than Scotland.

She initially worked on a farm at Tapanui for two years, before three years on a farm at Gore — that was when she began her involvement with the dairy industry awards - and the couple have now been on their current property for the past four years. 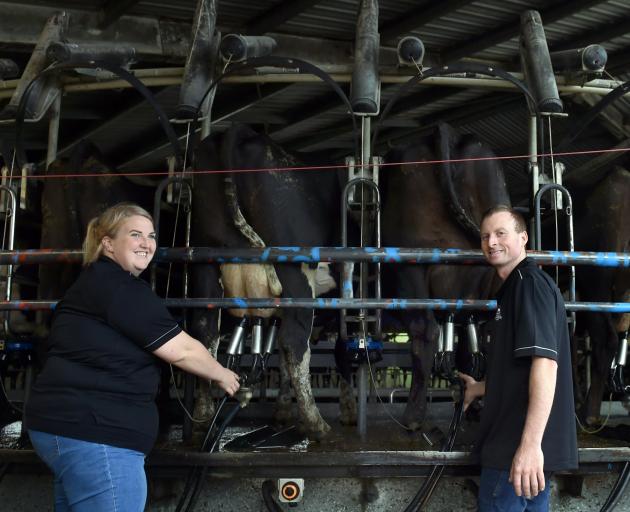 Mrs Henderson met her future husband in 2014; Mr Henderson grew up in Balclutha and left school at 16 to complete a building apprenticeship. He worked in a sawmill for three years, particularly enjoying the machinery aspect, and then for a Riversdale-based agricultural contractor for several years.

Having met Mrs Henderson, he started helping her on the dairy farm on his days off. He did not know much about the industry but he discovered that he enjoyed it. The couple sat down together and decided to embark on a career in the industry.

He was offered a job on a neighbouring farm as 2IC and he was there for one season. Once Mrs Henderson won the manager of the year title, they decided they wanted to go managing together.

The transition from his previous jobs to the dairy sector was a huge change, but what had proven invaluable was the skills that he had amassed through those roles, which he now used daily.

Mrs Henderson was keen to dispel the perception that dairy farming was just about milking cows.

She was keen to see school pupils get out on farms so they could see what was required. Many farmers, when advertising for staff, were looking for experience, but people had to start somewhere.

The couple were very open to employing newcomers to the industry; the key was to get out there and teach them how it was done — "what we are doing and why we’re doing it".

"We teach the guys as much knowledge as we can because we know we’ve got a lot to give to them ... there’s no point holding your knowledge and not sharing it. You’ve got that knowledge, just share it," she said.

They employed three staff — a Chilean, a Kiwi and a Filipino — "we’ve got the multi-nations here", she quipped — and they attended the dairy industry awards.

"They are a huge part of your business. We wouldn’t be here if we didn’t have a team behind us," Mrs Henderson said, adding that was not just the on-farm team but also their wider circle including their farm owners, overseer and other professionals.

When it came to staff management, "going the extra mile" was key. They considered their team as their family and that incorporated the employees’ own families.

Monthly events were held, both on-farm and off-farm, including the likes of ten pin bowling, fishing and barbecues. Good rosters and good hours were important and rosters were flexible to ensure they could attend the likes of their children’s sporting events, Mrs Henderson said.

"We’re out there. I think the guys like it, we’re out there every day doing it with them. We wouldn’t get them to do a job we wouldn’t do. They appreciate you taking time out to teach them and talk to them," she said.

The couple were very aware of the importance of looking after mental health and they also cited good communication as being very important. Having good systems in place was also a key factor to their success.

In a somewhat novel approach, if someone made a mistake, the rest of the team held that person accountable, making up a challenge for that staff member, whether it was mowing everyone’s lawns, buying a Lotto ticket or supplying soft drinks during the day to the others.

The team liked that approach; it took the negativity away from it, yet held everyone accountable "and we find they learn far better from their mistakes", Mrs Henderson said.

Being a large-scale farm and semi-self-contained was also good for staff, and they could learn from seeing a calf being born through to coming into the herd, Mr Henderson said.

When it came to the couple’s own partnership, they had strengths in different areas. Mrs Henderson said hers was "cows and grass", while her husband’s was more around the machinery, crop, fertiliser and day-to-day running.

They agreed a work-life balance was critical, as was getting off farm to "enjoy stuff". "You’ve got to look after yourself. If you don’t ... no-one else is going to do it. At the end of the day, our guys don’t want to see us being in a hole," she said.

The couple both went to a gym in Milton at least two nights a week and they were also involved with farm discussion groups.

Mr Henderson was keen to enter the dairy awards this year as the couple wanted to start a family soon and he felt it would be the best time before they had children.

The other reason was for their "fantastic" team.

"If we didn’t have that fantastic team, I probably wouldn’t have entered. I know I can step back out of day-to-day running and know the farm is going to run absolutely perfect," he said.

They also wanted to benchmark their business against others and they had learned a lot about themselves and their business from doing it, Mrs Henderson said.

Another round of judging would be held before the couple represented the region at the national final in Hamilton on May 15.

In the meantime, a field day would be held on their property on April 8.

Success, they believed, was something that was not celebrated enough and the couple urged other dairy farmers to enter the awards. Mr Henderson also acknowledged those people that put their time into organising the event.

Their next step was likely to be 50:50 sharemilking on the existing property next year, and their long-term goal was farm ownership.

Reflecting on their move into the dairy industry, both agreed it was the right thing to do and neither would change it. It was a very positive industry to be part of and the future was looking bright, with lots of opportunities for the younger generation coming through, Mrs Henderson said.

"We wouldn’t change it ... getting out of bed every day, you wouldn’t trade it because there’s no two days that are the same. You never know what’s going to happen in a day," she said.

"The world’s your oyster."