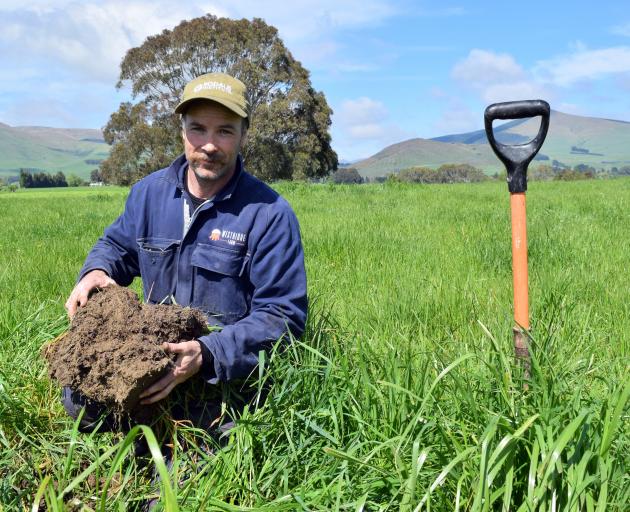 Westridge Farm owner Mark Anderson inspects soil on his dairy farm in South Otago last week. PHOTOS: SHAWN MCAVINUE
A South Otago dairy farmer is wintering his cows on a chequerboard of pasture and hay bales to improve the health of his soil.

Westridge Farm owner Mark Anderson said he had used a bale grazing system for the three past winters on about 60ha of his dairy farm in Waiwera South.

Paddocks used for bale grazing were closed to stock in March to give pasture time to grow.

In June, bales were laid in a chequerboard pattern on paddocks, sectioned off with 10 breaks.

When the cows moved on, up to 20% of the hay bale was left as residue in the paddock.

If extreme weather hit, some of the cows were returned to previously grazed breaks, giving the cows more space, limiting soil damage, and giving them all a space to rest on hay residue.

He learned about the system, which was popular in North America, by listening to podcasts and reading international research.

‘‘There is so much information available at our fingertips.’’

Each year, he places the bales in different spots of the chequerboard pattern, so more soil gets the benefit of the hay. 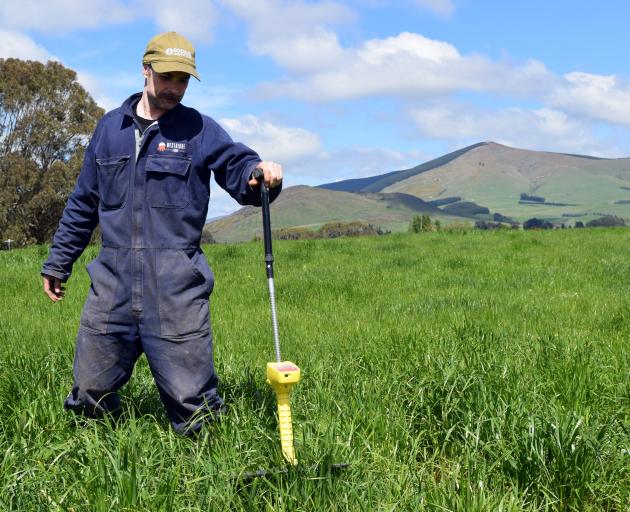 Waiwera Stream runs along the boundary of about 7km of the farm.

Other reasons include improving animal welfare; making it easier for staff to manage stock in winter and keeping the diet of the cows static.

Bale grazing did not require a change in diet.

A cow’s gut bacteria needed to change when moving from a diet of pasture to a winter crop.

‘‘Grass is what cows were designed to eat.’’

A bale grazing diet still provided the cow some variety, as the pasture could include grass and clover and the hay could be a mix of grasses and herbs.

If a cow got beyond a break on a winter crop, such as fodder beet, they could overeat and damage their gut health.

‘‘They can die overnight.’’

As cows could not overeat on pasture, it removed stress for a farmer. 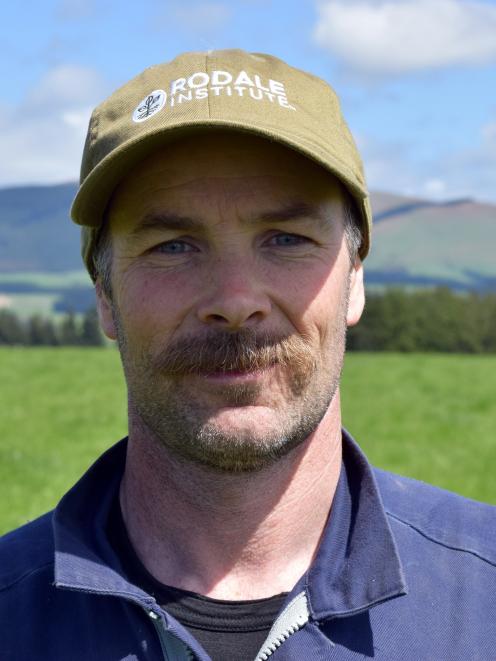 Mark Anderson
By removing a need to plough a paddock to resow it after winter, bale grazing maintained carbon in the soil and its ability to hold water.

Spring was a busy time for dairy farmers, he said.

‘‘It’s awesome not to be tied up on a tractor all night tilling the soil, getting next year’s crops ready.’’

Bale grazing does not require the use of any agrichemicals, reducing nitrate leaching.

By eliminating the need for some resources, such as fertiliser and agricultural contractors, the cost of which was rising, meant a farm could run fewer cows and maintain or improve profit margins.

Since he had been using the system, his cows were a lot more content than when they had a winter diet of fodder beet and kale. The health of his cows had improved.

‘‘It’s like eating lollies versus a good steak dinner.’’

A cow’s ruminant digestive system functioned better on a diet of longer grass — the three- to four-leaf stage — as the cow emitted less methane and its dung was more solid and ‘‘not a fountain’’.

‘‘It’s like dung should be — it’s more fibrous and not going straight in and out.’’

As the herd animals were healthier, he had been able to reduce some dietary supplements, such as adding minerals in water troughs.

The hay residue acted as a mulch and improved the health of the soil.

Soil disturbed by tillage machinery could turn it to a ‘‘soup’’ after heavy rain.

When grass was shorter it got stressed and went to seed in a bid to reproduce.

As the hay residue retained moisture, it stopped grass going to seed as fast.

When Southern Rural Life visited, he used a penetrometer to test the soil compaction in a paddock where he had wintered cows using bale grazing in 2020.

The soil was looser in spots were bales had been placed, indicating it was healthier, he said.

Some University of Otago students dug a soil sample below hay residue and counted 125 worms in it.

AgResearch field experiment The Soil Armour Project is under way at sites in Northern Southland and South Otago to find out whether cattle grazing on a pasture in winter can reduce nitrogen leaching and mud, compared with traditional forage crops.

Mr Anderson was considered for the project but his soil type did not suit the technology needed to be installed in the paddocks to measure nitrate leaching.

Dylan Ditchfield’s dairy farm in Northern Southland is part of the project, which uses a bale grazing system after hearing about it from Mr Anderson.

Mr Anderson was pleased bale grazing was part of the AgResearch project.

‘‘AgResearch has come in neutral but I think they are quite impressed.’’