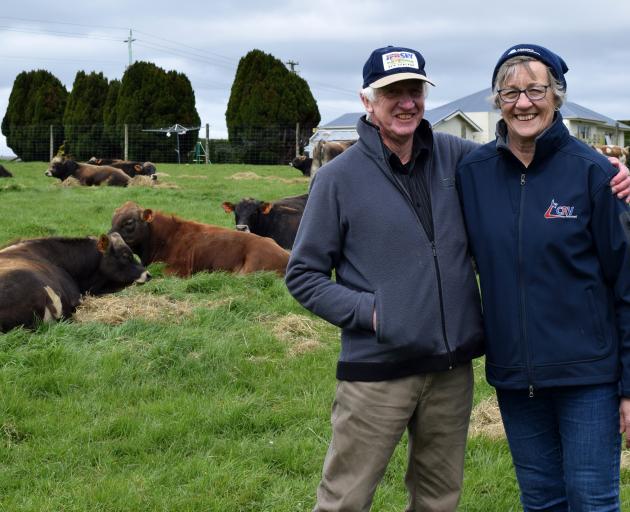 Ashvale Jerseys Ltd owners Rodney and Jocelyn Dobson, of Gropers Bush, celebrate selling everything on offer at their annual bull sale in Western Southland last week.PHOTO: SHAWN MCAVINUE
A herd of dairy bull calves with the greatest potential to breed profitable and efficient replacement heifers sold for the highest prices in New Zealand this year, their breeders say.

The auction ran in a shed on a dairy run off in Fairfax.

When bidding opened on lot 18 — bull 20-429 — the auction had rapidly reached $3000, when Mr Dobson interrupted auctioneer Ben McKerchar to ask bidders to look at the breeding worth and production worth of the bull’s dam Ashvale Spirit Rosie S3J.

Bidding resumed to reach the top price of $4250 — the highest price paid for one of his bulls since the annual sale started in 2006.

Mr Dobson, speaking to Southern Rural Life after the sale, said he was ‘‘ecstatic’’ with the sale results.

‘‘That would be the top annual dairy bull sale in New Zealand this year — by a long way.’’

When asked for his secret to breeding top dairy cattle, he replied: ‘‘I’ve been farming for 50 years — you’d hope you would have achieved something in that time.’’

The couple moved to Southland in 1993, after dairy farming on the Hauraki Plains.

He liked Jersey cows because they were more efficient at converting grass to milk than other breeds.

Mrs Dobson said a selling point of their bulls was them being born and reared on their 156ha dairy unit in neighbouring areas of Gropers Bush and Fairfax and never going anywhere else.

The ‘‘closed herd’’ was appealing to buyers after the arrival of cattle disease Mycoplasma bovis, she said.

Mr Dobson said he enjoyed sale day but not all the work leading up to it.

However, when eight buyers registered to buy an offering of 44 bulls last week, it made him apprehensive.

‘‘You think to yourself — what if they only want one each.’’

The feelings of doubt lift when agents begin buying several bulls, he said.

When he was asked how many more sale days he had left in him, his wife laughed,

Mr Dobson said there would definitely be another sale next year because he was already rearing more bulls for it.

Farmers may get record price for milk