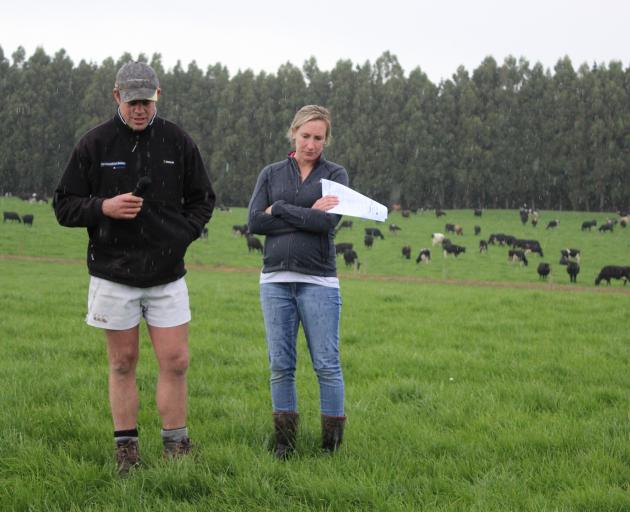 First to stick out are the rolling hills and steeper landscapes, obvious signs it was once home to animals of a different kind, combined with planting of trees around the property.

It was the diversity of the 355ha property, and the work and investment the Moseby family has put into it, which resulted in their being crowned the 2018 Southland Ballance Farm Environment Award supreme winners.

Hosting a field day on their farm, near Mataura, owners Ryan and Abby Moseby showed visitors around the property, which was only in its fourth year as a dairy farm.

Looking into succession, the Moseby family decided it was going to be a challenge going through the process as a sheep and beef operation, so they made the decision as a family to convert.

Kanadale is predominantly a grass-based system, with low input.

''Pasture production is one of the big focuses of what we do,'' Mr Moseby said.

The farm is largely self-contained, with some cows wintered on paddocks next door to Kanadale, owned by their neighbours.

Supplement feed to cows was made up of in-shed feeding as well as baleage.

Before the conversion, effluent was completely foreign to the family so when they set out to build their effluent pond they spent a bit of time researching their options, Mr Moseby said.

''We spent an afternoon with Environment Southland cruising around three or four dairy farms looking at different options, getting their perspective on what was practical.''

The Mosebys then worked with Miranda Hunter and RDAgritech to come up with a practical solution for their farm.

One of the unique parts of the Moseby pond is the inspection chamber, which is used to tell if the pond is leaking.

From the pond the effluent was pumped to cover about 90ha, Mr Moseby said.

The Mosebys have their own strategic plan when it comes to irrigating, which includes following the information on Environment Southland's website but also looking outside their own door.

''If we ever question, we can jump on there to see what the soil moisture is,'' Mr Moseby said.

Depending on conditions, the Mosebys can adjust the run time on the irrigators - it was all about listening to technical advice and using a bit of common sense.

''It comes back to that stuff is pretty valuable to us and we don't want it running off into water,'' he said.

Southland Ballance Farm Environment Awards chairman Bruce Allan said something which had struck him was how proactive the Mosebys were.

''They've listened to advice, done the hard work, spent the dollars and as a result their business has improved.''