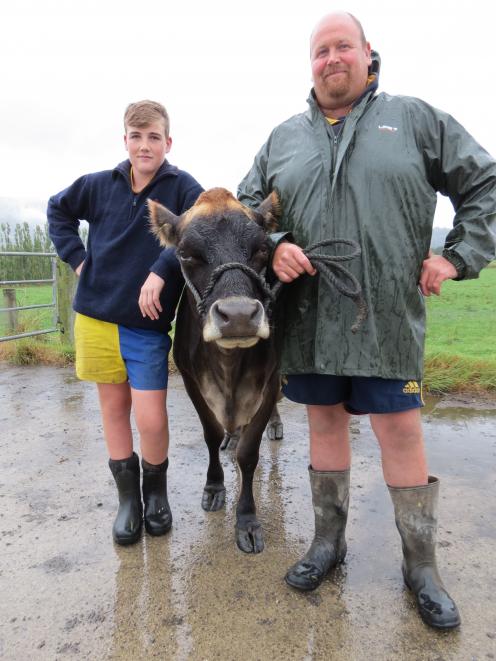 Kelly Allison, pictured with son Fynn (14), has sold several high-performing, high-breeding-worth bulls to LIC, including Bernard, Boy, Bolt, Barker and Beauden (as in Barrett). Each animal in that particular family has a name starting with B, to keep track of the line. Photo: Yvonne O'Hara
''Fat is back'' and no longer the ''ogre'' it used to be, and that is good news for Jerseys as they have a higher fat content relative to protein than many other breeds.

Economic Values is an estimate of a trait's value to a dairy farmer's production and profitability and contributes to cattle breeding worth (BW).

He said the price changes for fat relative to protein had also produced large shifts in BW, both between and within dairy cattle breeds.

Neither Jersey New Zealand's (JNA) Industry Affairs committee convener Roger Ellison, nor Jersey stud breeder Kelly Allison, who has the Bonacord Jersey Stud, Outram, said they could recall such a high percentage in the list before.

JNZ's general manager Pam Goodin said without having to do ''some serious research I can only say it would be a long time, as in at least 10 years, if not longer.''

Mr Ellison said fat had been in the doldrums for years while protein was more valued.

''During the last three to four years there has been a surge in demand for milk fat.

''The big thing is all the fat research in the 1950s and 1960s said fat was bad for you and we shouldn't be eating butter as it causes heart disease.

''We were told to take the fat out and replace it with sugar.

''Now we have diabetes.

Mr Allison, in partnership with his father, Peter, farms 200ha effective and runs 600 cows, with a five-year average production of 250,000kg of milk solids.

He said while there had always been a good representation of Jerseys in the RAS, it was probably a first to have so many listed in the top 30.

They have sold several bulls to LIC, which have done well on the listings, including ''Bonacord and Bernard'' , which ranked 19 with a BW of 230 on the current RAS.

Mr Allison said the extra fat content would mean a slightly higher return for those with Jerseys.

''Last year we got 3c ahead of payout so we had higher fat [content].''

He thought it was likely there would be an increased demand for Jersey semen, although there was a consistent demand for their bulls.