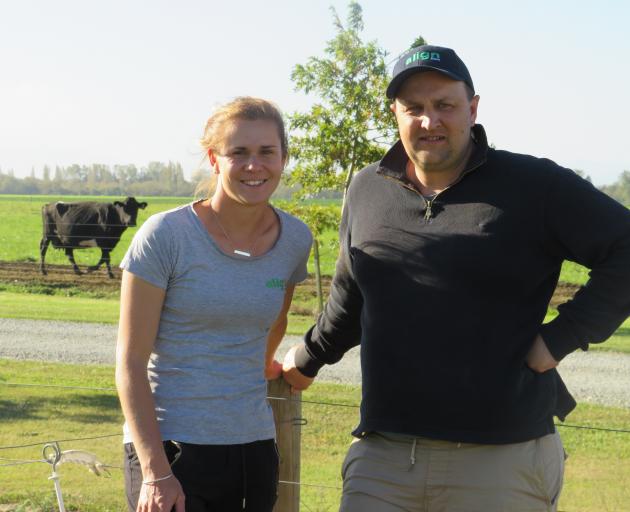 It’s a constant journey and one they are keen to embrace as instigators of change.

Their farm management practice, with the full support of staff, sought ways to improve life on farm, not only for staff but for stock, as well as the environment.

"It’s about finding a better balance around what we are doing," Rhys said.

The couple, who have two young children, farm at Align Clareview, at Westerfield, 25km out from Ashburton.

Kiri is farm manager and, in a way, Rhys her right-hand man; he is also Align Farms Group chief executive officer.

The Align Farms Group, founded by directors John Buchanan and Rob Cameron, is made up of seven farms in Mid Canterbury, covering 1786 hectares and milking 4500 cows.

She has a team of five full-time and one part-time staff working on the farm.

It is a 296ha property, the largest in the Align group.

They have initiatives in place to help them along their journey including a roster system app, where staff choose their work days in four-week periods, and a five-year trial about to begin to collect data on regenerative dairy farming on a commercial scale.

Regenerative farming is not a phrase they particularly liked, as it implied farming had been degenerative up until now, Rhys (34) said.

He has spent more than 20 years in the industry.

The Roberts instead prefer to call it "finding a better balance" environmentally and socially where they could "work the farm, not have the farm work us".

The regenerative trial, due to start June 1, will collect valued data on regenerative practice using half the Clareview farm.

They have spent the past 18 months setting up the trial and had already noticed improvements in soil health and cow conditioning.

Just under half the herd will run on one half of the farm with no synthetic fertiliser, up to seven or eight different pastures, longer grazing grasses and less stocking rate per hectare.

"Data collected on each of these parameters will help us demonstrate whether a regenerative dairy farming system can be as profitable as a conventional dairy system, whether the practices will reduce the environmental impact of dairying, result in healthier animals and milk, and generate a positive community response."

They intend to share their findings with the wider farming community. It is a big task but just one of the on-farm initiatives to excite staff. The other was the staff rostering app.

Five families, with 11 children ranging in age from preschoolers to late teens, are living on the property.

Staff, generally worked to a 45 hour week, and, since the "choice roster" inception, had been able to make use of more sociable hours with activities such as mountain biking and gym workouts.

The app concept originally started as a whiteboard process where staff would choose their days of work from allocated spots, Kiri said.

After some tweaking, an app was created and set in motion.

The concept eliminated staff wasting time on farm and allowed them to work to suit their family life, social commitments and activities.

They had not needed to advertised for staff in the past seven years.

Staff were all paid living wage or higher, had full health insurances for themselves and their families, and there were plans in place to get the farm feeding 60% of the diet, with milk, meat and eggs included in the mix.

Vegetable patches had been planted and a farm chicken coop was planned; 50 chickens had been ordered.

It was because of the amazing Clareview team that the Roberts were able to do great things on farm, Rhys said.

"We employ some fantastic people. We’ve done extremely well in that space," he said.