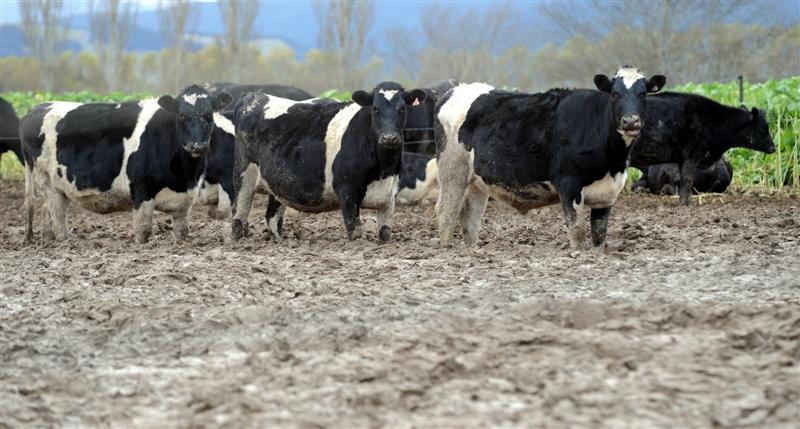 When new national freshwater regulations were announced last year, the new rules for pugging in paddocks and crop resowing dates were among those that created upheaval in the South. Photo: ODT files
Scenes of cows stuck in the mud will continue to blight the Southern landscape this winter after a Government decision to delay new rules for farmers keeps the environment in second place, conservationists say.

But farmers say their practices are improving every year and the sector is welcoming the delay in implementing unworkable new intensive winter grazing rules while the Government works out appropriate regulations for the industry.

But new rules would be deferred until May 2022, while the sector, led by the work of the Southland Advisory Group, rapidly developed, tested, and deployed new freshwater farm plans. Immediate improvements would be required, Mr Parker said.

Increased monitoring and reporting by councils would ensure measurable improvements, he said.

When new national freshwater regulations were announced last year, the new rules for pugging in paddocks and crop resowing dates were among those that created upheaval in the South.

A parade of tractors down Gore’s main street and a gathering of hundreds of farmers in Invercargill followed.

There were public calls for ignoring the new rules en masse as farmers’ anger about the changes being forced upon them boiled over.

Consistent rules rather than individual farm plans were needed in order to know what was happening in freshwater ecosystems, Mr Zwaan said.

Endemic freshwater fish such as southern flathead galaxias, eels, and inanga-whitebait were being killed, he said.

Waiting to see the results of more monitoring would not help when people knew streams and rivers were already overloaded with runoff.

"This isn't a problem of a few bad actors, it's a symptom of a lack of leadership," he said.

Greenpeace senior campaigner Steve Abel said the announcement of the delay, made at a DairyNZ function, showed the Government was more afraid of angry farmers than dirty waterways.

But DairyNZ chairman Jim van der Poel said farmers knew what good management practices were and, by working together, were seeing improvements year on year.

The decision had given farmers reassurance they could prepare for winter, he said.

Southland dairy farmer Ewen Mathieson said the delay offered a window of opportunity for farmers to take ownership of the sector’s way forward.

He urged all farmers to use good management practices this coming winter, because farmers’ actions now would help to define farming in the future, he said.

There was universal recognition that the freshwater rules passed in August last year had several unworkable parts.

The rules around intensive winter grazing were one of the first ones to take effect and needed urgent attention, Mr Allen said.

Disappointing but not surprising. It is difficult to come up with a set of workable rules when there are simply to many farm animals in the country. Year upon year farmers claim improvement but the flow of pollution into our environment continues unabated threating our wildlife, marine life, human health and ecosystems.
A study estimated the world’s 7.6 billion people represent just 0.01% of all living things. Yet humanity has caused the loss of 83% of all wild mammals and half of plants, while livestock kept by humans abounds.