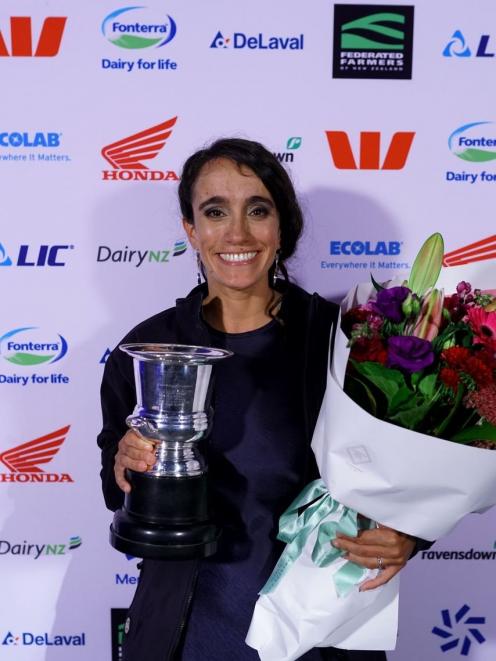 Those photographs started her on a journey from Argentina to working in the New Zealand dairy industry.

She arrived in New Zealand in 2013 and spent the first few years getting settled in.

"Everyday I get to see a sunrise. It’s beautiful," she said last week from her home in Mid Canterbury.

Maria's journey to Mid Canterbury was varied and involved hard work and determination.

She first picked up a job in an apple orchard in Hawke’s Bay. But it was not for her.

She was raised on a medium-sized 580-hectare beef farm in Argentina and was keen to get back to animal farming.

It led her to dairying and being named this year's Canterbury-North Otago Dairy Manager of the Year. The national final is on Saturday.

It has been a steep learning curve but one she has picked up easily.

Her switch to the dairy industry began with an entry level role with Scott and Helen Searle at Rakaia, in December 2013.

Scott was a farm supervisor with Dairy Holdings at the time and Maria quickly moved up the ranks from farm assistant to 2IC, then manager.

Over a four-and-a-half-year period she also worked on a dairy farm in Australia, returned to Argentina for a short stint at a grain store and returned to New Zealand to work at Mayfield, alongside the Searles on their family-owned farm.

By the time the Covid lockdown hit, she was settled in New Zealand, working as a farm manager for Dairy Holdings’ Vervet Holdings farm, near Coldstream.

It is a 180ha property milking 660 cows in a 40-bail internal rotary with automatic cup removers.

Until Covid hit in early 2020 she had regular visits of family from Argentina each year.

Her older brother Juan , who was holidaying in New Zealand at the time, got stuck on the farm for three months with Maria, which she loved. And he was able to work online; his employer in Argentina arranged for a computer to be sent to him from Auckland.

Maria has a strong connection with the Latina community in Mid Canterbury, who have regular gatherings and social events.

She is a member of the Dairy Women’s Network, which runs industry events and conferences to encourage and support women in the industry.

Maria has an agricultural engineering degree from Argentina and plans on completing a Diploma in Agribusiness once her New Zealand residency application is accepted.

It has been a bit of a waiting game. She applied in September 2019 and is still on a work visa, sponsored by Dairy Holdings.

"Immigration are cutting my wings," she joked.

In the future she would also like to become a contract milker, and increase her stock numbers to have her own herd.

"I love farming because every day is different, and I really enjoy working outside and with animals."

Maria credits her team with helping get through last year’s busy calving season. She has three full-time staff and a supportive supervisor at Dairy Holdings.

"One of my biggest successes is being able to go to work every morning with a smile on my face because I love what I do," she said.

"I’ve got an awesome team."