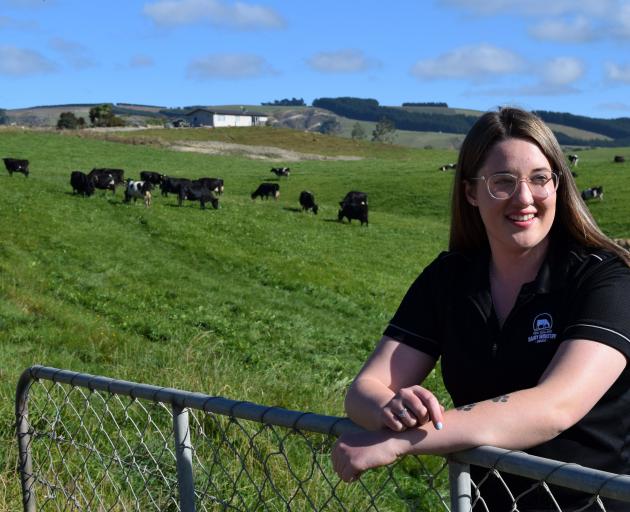 Miss White (19) has been crowned the Southland-Otago Dairy Trainee of the Year and will represent the South at the Dairy Industry Awards in Hamilton on May 15.

She got three tattoos on her forearm last year — a hoof print of a cow and paw prints of a dog and a cat — a nod to her favourite animals.

After working in the industry for nearly two years, she was proud of her progress.

"I started farming without knowing a cow’s teat from her ear and now I feel I have such a broad range of knowledge and can care for cows throughout each part of the season.”

Her only farming experience before entering the industry was the small numbers of sheep and beef on her family’s lifestyle block near Invercargill.

A couple of weeks in to her final year at secondary school, she made a snap decision to leave and chase a career in the dairy industry.

"I like being outside and with animals, so I thought I’d give it a shot."

She responded to a job listing on the Fonterra website and started a fixed-term contract to work a season as a farm assistant, milking 420 cows in Woodlands for Jono and Eilish van’t Wout, from July 2019.

In November last year, she began working as a farm assistant for Bathan and Jane Muir, milking 1600 cows on their 552ha Edendale property.

The challenges of working on a bigger farm were enjoyable, she said.

"I love it — it’s such an amazing job. You’ve got the opportunity to do and experience everything and to learn a lot."

She admits it could be a struggle getting out of bed early on a cold and wet morning, but she had never regretted her decision to work in the industry.

"I’ve never thought of doing anything else."

She loved the variety of the work and the ongoing learning available.

Since entering the industry, she had completed the Primary ITO milk harvesting level 3 course and was working towards achieving ITO level 4 and 5 dairy farming qualifications.

She had also attended DairyNZ discussion groups, which allowed her to network and learn techniques from other farmers.

"Everyone does something differently — there’s no two ways the same."

Her long-term plan includes progressing to a second-in-command or an assistant manager role within the next three years and to be managing a dairy farm in five years.

She was confident she could progress as planned.

"If you have the passion and the dedication, there’s no reason that you can’t."

She entered herself in the awards after hearing positive stories from the van’t Wouts, who had entered the competition before.

Being named the regional winner, including $6200 in prizes, was a shock.

"I didn’t know what to say or do — I was pretty excited and I still am."

The awards had allowed her to make valuable connections and fast-track her learning.

She encouraged anyone eligible to enter the competition to enter.

"You’ve got nothing to lose and heaps to gain."