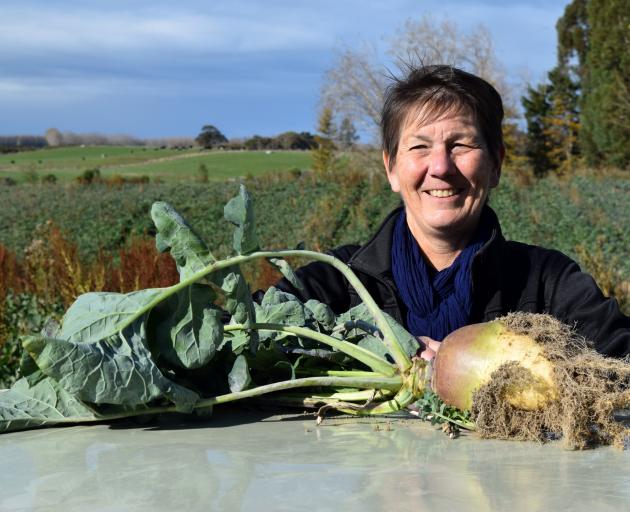 DairyNZ senior scientist Dawn Dalley shared the findings of her research on the time cows spend lying down during winter at a field day near Balclutha this month.PHOTO: SHAWN MCAVINUE
A scientist has given farmers the low-down on how much dairy cows need to lie down during winter.

DairyNZ senior scientist Dawn Dalley, of Lincoln, speaking at a wintering field day at Telford near Balclutha this month, revealed the findings of a five-week experiment at Southern Dairy Hub near Invercargill, during winter last year.

The aim of the research was to determine how soil and weather conditions contribute to the risk of reduced lying times in dairy cows wintered on crops.

For the research, four mobs of 100 cows were studied.

Each mob contained 30 cows wearing devices to record their behaviour.

Ankle bracelets on cows recorded when they stood and when they lay down.

Cows needed to be lying down to have a "restorative" sleep, Dr Dalley said.

Ear-tag technology revealed other activity including grazing and ruminating.

The research showed cows spent significantly less time lying down on a day when it rained and the day after.

"Clearly those soil conditions are having a big impact."

Only a small amount of rain was needed to change the cows’ behaviour, she said.

"They could not find suitable lying spots."

During the experiment, cows average daily lying time ranged between 5.5 hours and 15.5 hours.

The recommended lying time for a cow was eight hours but between 10 hours and 12 hours was preferable.

The cows lying for less than eight hours a day were younger, usually aged 3 or 4 and had calved earlier.

The cows lying for more than 12 hours had an average age of about 7.

Reasons for older cows lying down more were unknown but it could be because they were "old, sore and tired and would lie down anywhere".

Another possibility was the older cows were "bossier" and grazed before the younger cows and secured the best lying spots first.

The longer a cow stood, the greater its chances of developing issues such as lameness, Dr Dalley said.

Wet weather did not impact grazing or ruminating behaviour.

Paddock location had more of an impact on soil conditions than the crop type being grazed in it, Dr Dalley said.

The paddocks containing lower terraces had the poorest soil conditions, she said.

Farmers needed a wet-weather contingency plan, and know when to implement it, so cows always had a place to lie, no matter the conditions.

Examples of places include beside a shelter belt, on grass strips in a crop paddock, or on rubber matting in laneways for a short period.

She encouraged farmers to share their wintering plans with staff and discuss why decisions were made, so everyone knew when and how to implement it.

This year the Government announced some of the proposed requirements for winter grazing, such as pugging, resowing requirements and new slope rules, had been deferred until next year.

The extension had given farmers an opportunity to prove their sector could manage itself, so everyone must design an effective winter grazing plan.

"We have one opportunity to get crop wintering right and it is this winter."