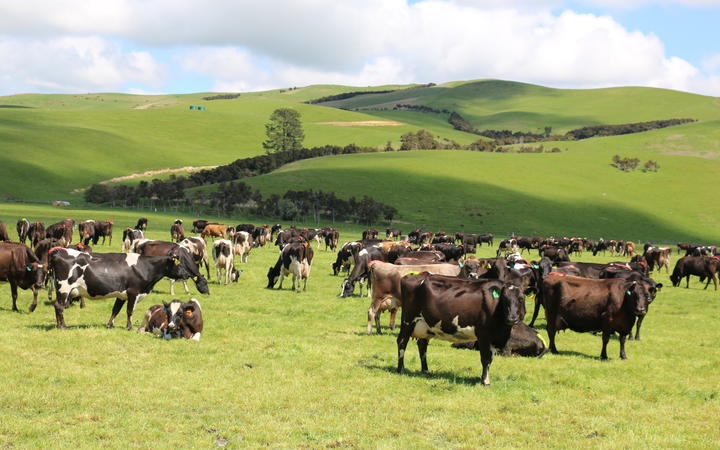 Farmers don't want on-farm emissions to be included in the Emissions Trading Scheme so the race is on to approve an alternative levy for the agriculture sector. Photo: RNZ
Two options for how farmers could pay for their on-farm emissions have been released for consideration.

In 2019 the Government announced the sector would have to start paying for emissions from 2025, and the industry was given time to develop a way to measure and price them.

The Government said if no credible alternative was put forward, agriculture would be put into the Emissions Trading Scheme.

This levy would calculate emissions using farm-specific data and the farm would then pay a price for its net emissions.

This option would reward eligible on-farm sequestration, additional to that currently included in the ETS, that could offset some of the cost of the emissions levy.

Any additional revenue raised through the levy above the scheme costs would be invested back into the agricultural sector for further emissions reductions work, as well as research and development.

This levy would calculate emissions at the meat, milk, and fertiliser processor level, based on the quantity of product received from farms, or in the case of fertiliser, sold to farms.

It would be paid at a processor level, with the cost likely passed on to farms based on the quantities of meat and milk supplied to processors or fertiliser bought by farms.

Farms (individually or in collectives) could choose to enter into an Emissions Management Contract (EMC) to get a payment for reducing emissions and/or for recognising sequestration on-farm.

Both options take a split gas approach, meaning farmers would pay one price for methane and another for carbon.

Farmers would also be rewarded for on-farm efforts to off-set emissions like planting which means they could lower the amount they have to pay.

DairyNZ chair Jim van der Poel said the Emissions Trading Scheme pricing would be out of farmers' control and they would face a broad-based tax.

"Also, farmers wouldn't get recognition for on-farm work to reduce emissions. We're working to get a better deal for farmers while still meeting environmental goals."

He said it was "hugely important" farmers got involved and told He Waka Eke Noa what they thought about the proposals.

"We're committed to finding a solution that works for farmers and keeps the sector in control of where and how it uses funds for the benefit of farmers."

The discussion document includes case studies of farms and what the cost of emissions could be.

Under option one, assuming the price of methane is the same as under the ETS, the estimated revenue from emissions costs from all farms is $137 million per annum.

This is before the financial offset from sequestration, which initial modelling suggests could have an annual value as high as $82 million a year - meaning farmers could only pay $55 million a year to offset emissions.

He Waka Eke Noa will hold a nation-wide roadshow in February where farmers will have the opportunity to have their say.

Feedback from engagement including the February roadshow and farmers' online feedback will form part of the partnership's recommendations to the Ministers of Climate Change and Agriculture in late April 2022.