‘Huge’ frost could have been dire 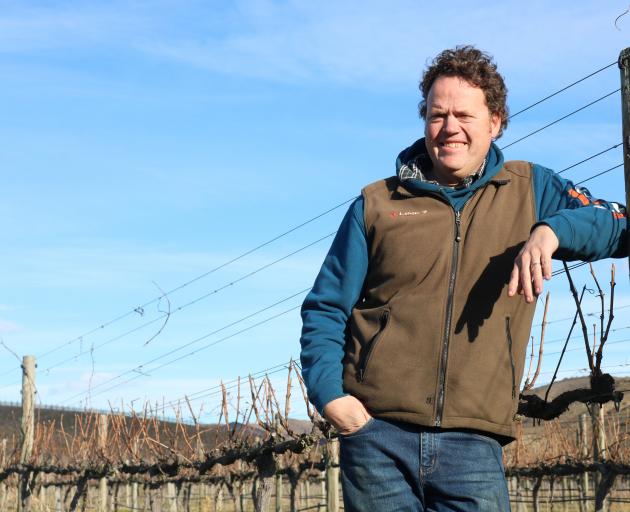 Central Otago Winegrowers Association spokesman James Dicey pictured earlier this year. Photo: ODT
Central Otago viticulturists and orchardists are feeling "positive" about the upcoming season and pleased to have "dodged a bullet"  recently in the form of  "once in a lifetime" frosts, horticulture leaders say.

Central Otago Winegrowers Association president James Dicey said a "huge and highly unusual" frost throughout Central Otago on October 13 could have been catastrophic but ended up causing "very little damage" to grapes.

Extremely dry air conditions at the time of the -5degC frost meant there was a "freeze" rather than a frost, Mr Dicey said.

The phenomenon had been "totally, 100% unheard of" for at least 60 years, but the unusual nature of the conditions meant there was very little damage and viticulturists had "dodged a bullet", only losing about 5% to 10% of grapes overall, he said.

However, because indications had already been for high yields, the eventual harvest might still end up not being affected, Mr Dicey said.

This was because the "grape set" for each season was actually created the season before.

"We had an amazingly hot summer last year ... and we’re coming in with a high potential crop load [for this summer]. If we have good flowering of fruitset in the first two to three weeks of December, we shouldn’t have any yield losses on balance."

Orchardists were also hopeful of a good season, although emphasised it was too early to make firm predictions.

Some orchardists have lost 10% to 20% of their cherry crop because of the October frosts, but  the resulting wider spacing of cherries on branches means the fruit may grow bigger, and so tonnage could be about the same as last season.

"You’re better off with bigger cherries and better-quality fruit."

Teviot Valley grower Gary Bennetts said good amounts of rain in November, a crucial month for the growth of fruit, would help crops.

Cherries in the valley were "looking good", but apricots were "a bit light" because of pollination issues. Blossom had come "quite quickly" because of the warm winter, but then subsequent cold weather had affected trees that were in full bloom.

However, in Earnscleugh and Cromwell apricot crops are looking good.

Orchardists expect peach and nectarine crops to be similar to last year’s.

The first early variety cherries are expected to be harvested in the last week of November or first week of December, slightly later than during last year’s record early season.