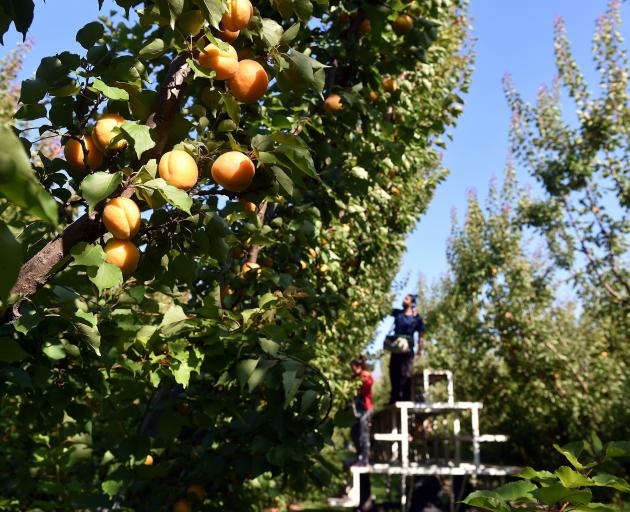 Photo: Stephen Jaquiery
Central Otago’s horticulture and viticulture sector acknowledges it underestimated interest from Kiwis in seasonal work and is struggling to deal with "skyrocketing" applications, an industry leader says.

The industry has faced criticism for not responding to applications from New Zealanders seeking picking jobs and over-reliance on recognised seasonal employer (RSE) scheme workers.

Summerfruit NZ chief executive Richard Palmer accepted the criticism and said the industry was working to clear a logjam of applications that left growers overwhelmed.

"We have had a fantastic response — it is much more than we thought we would get."

However, how growers were dealing with job applications and juggling their work obligations — including frost fighting twice in the past week — was becoming a concern, he said.

"There’s just been skyrocketing applications and growers are a bit overwhelmed.

"It is about sheer capacity as the numbers [of applications] ramp up."

He and other leaders would be working more closely with orchardists to process applications and be more clear about conditions including start dates, Mr Palmer said.

"Our message has to be there’s a long way to go in the harvest and days are a moveable feast."

When asked if growers had been complacent, Mr Palmer said there had to be more communication across the whole sector.

"Many have not started the harvest yet but we will be doing more around encouraging growers to be responsive."

Stakeholders and the Ministry of Social Development (MSD) had funded a fulltime labour market co-ordinator to help deal with applications and place workers in suitable jobs but the number of applications did not necessarily translate into a suitable workforce.

It was too early to tell if the sector had the number of workers it needed, Mr Palmer said.

RSE workers were a key component of the worker mix in Central Otago but a fraction of the overall total and many orchardists and viticulturists did not use the scheme.

Mr Palmer said the industry had not hung all its hopes on RSE workers returning.

Strong lobbying from the industry has meant an additional 2000 RSE workers from the Pacific will be allowed back into the country from January.

The Government has further sweetened the deal for Kiwi seasonal workers on orchards and vineyards, offering up to $200 per week accommodation allowance, payments for wet weather equivalent to the minimum wage, and an incentive payment of $1000.

The New Zealand Seasonal Work Scheme was to address some of the barriers New Zealanders faced when considering seasonal jobs, particularly relocation costs and unstable income, she said.

are these people ever happy ? moaning that they thought kiwis couldnt handle the job now cant handle employee registration?

Sheesh, you are not wrong! This is certainly not a nimble industry, is it?!

Clearly if the orchardists are being swamped by more job inquiries than they can respond to then there is absolutely no justification for their claims that they need RSE workers. Pretty much the end of their claim I would think.